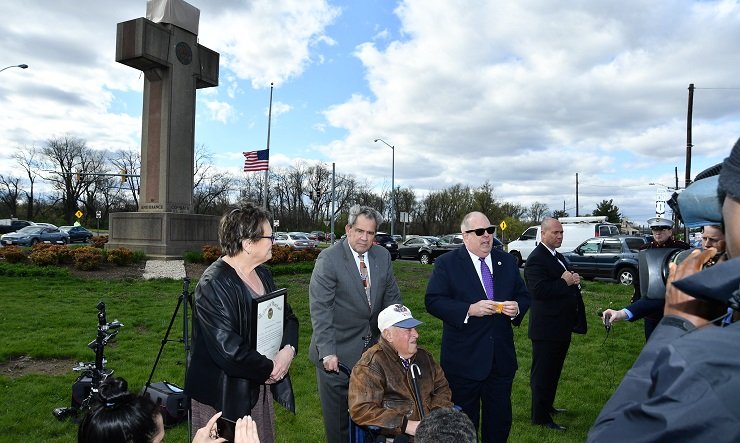 Some secularists, who claim that the First Amendment gives equal support to both religion and non-religion (to the faithful and to atheists), look for every opportunity to remove Christian symbols from public view. The most recent example is the 40 foot cross in Bladensburg, Md., one mile east of the District of Columbia, that was erected in 1927 to honor the soldiers killed in World War I who came from that neighborhood.

Any Christian symbol, be it a Christmas crèche, a cross or the Ten Commandments, must be removed from public view so as not to offend the sensitivities of secularists, atheists, and those who profess no religion. Why do some Supreme Court justices use this argument to interpret the First Amendment?

This is a country founded on Judeo-Christian principles. Read the history of Colonial America. Many early colonists fled to this country precisely to escape from the rejection of their right to religious freedom. They wanted to live their lives according to God’s designs, as their conscience guided them. They read the Bible. They worshiped God regularly. They cultivated the virtues, both religious and civic, in themselves and in their children. They were strong patriots, and raised their children to be well-balanced, law-abiding and responsible citizens.

The Founding Fathers (all 90 of them, and not just Jefferson, Franklin, and Madison) had a deep appreciation of the role of religion in a working democracy. They knew that a democracy demands freedom, and that freedom demands virtue, and that virtue demands the moral principles and character formation that can only come from religion.

George Washington, in his Farewell Address, recognized the irreplaceable role of religion in the American Republic:

“Of all the dispositions and habits, which lead to political prosperity, Religion and Morality are indispensable supports. In vain would that man claim the tribute of Patriotism, who should labor to subvert these great pillars of human happiness, these firmest props of the duties of Men and Citizens. … And let us with caution indulge the supposition, that morality can be maintained without religion. Whatever may be conceded to the influence of refined education on minds of peculiar structure (referring to Jefferson, Franklin and Madison), both reason and experience forbid us to expect that national morality can prevail in exclusion of religious principle.”

Our American way of life is built on the foundation of our Founding Documents, especially the Declaration of Independence and the Constitution, summed up so beautifully the Gettysburg Address. All of these show clear presumption of the supporting influence from Christianity. These documents have served us well for over two centuries, carrying us through such crises as the Civil War and the huge struggle against totalitarianisms in the great World Wars. The French Revolution, and its form of democracy relying strictly upon human reason, was a disaster. Any dissenter went to the guillotine. Our country has survived the many challenges to it because the basic principles of the Founding Documents were sound and rooted in reality, with a clear understanding of human nature:

“We hold these truths to be self-evident, that all men are created equal, that they are endowed by their creator with certain unalienable Rights, that among these are Life, Liberty and the pursuit Happiness.”

That is why every public official must take an oath to defend the Constitution. Supreme Court Justices are to defend the original Constitution, and not to re-define it according to their “enlightened” personal opinions or preferred presuppositions. The judicial task (in contrast to the legislative task) is to apply the principles of the Founding Documents to contemporary problems. The judges are, to use an example given by Justice Neil Gorsuch, like umpires at a ballgame. They simply apply the rules to the present game. They don’t make up the rules as they please. Judges are not to legislate from the bench.

The Bill of Rights, the first ten amendments, were attached to the Constitution precisely to ensure that certain basic human rights were protected. Our human rights come from God; they are not a gift to us from the government. The first, and most important, of these rights is religious freedom. Without this right, everything collapses. The Bill of Rights begins with: “Congress shall make no laws respecting an establishment of religion, nor prohibiting the free exercise thereof.”

Religious freedom, as the Founding Fathers understood it, meant that Congress cannot establish a religion or suppress various religions. The states could, and did, establish a religion. Congress is not kept from assisting religion. It can also enforce duly enacted laws for the common good against those who violate these laws in the name of religion.

It is high time for the Supreme Court Justices to retrieve the original intent and meaning of religious freedom as found in the establishment and free exercise clauses in the First Amendment. The government is to accommodate and encourage religion to support its secular goals, and not to be hostile to it, or as is now the case, to give preference to non-religions, secularists and atheists. The future of the nation depends upon this.

Recognizing the legitimacy of the 40 foot cross in Bladensburg, Md., is not a concession to religious liberty, or an exemption of it from civil law. It is simply applying the First Amendment correctly. May the Supreme Court continue to retrieve religious liberty from its seriously diluted and distorted condition, and its judicial misinterpretations. People of Faith must reclaim their rights.