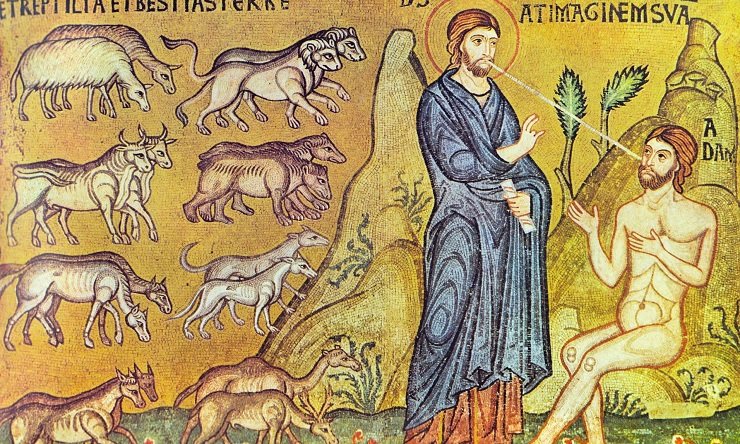 In his homily, “On the creation of Terrestrial animals,” St. Basil the Great, whose feast day is Jan. 2, described the virtues of animals. Here is an except.

If the lioness loves her cubs, if the she wolf fights to defend her little ones, what shall man say who is unfaithful to the precept and violates nature herself; or the son who insults the old age of his father; or the father whose second marriage has made him forget his first children?

With animals, invincible affection unites parents with children. It is the Creator, God Himself, who substitutes the strength of feeling for reason in them. From whence it comes that a lamb as it bounds from the fold, in the midst of a thousand sheep recognizes the color and the voice of its mother, runs to her, and seeks its own sources of milk. If its mother’s udders are dry, it is content, and, without stopping, passes by more abundant ones.

And how does the mother recognize it among the many lambs? All have the same voice, the same color, the same smell, as far at least as regards our sense of smell. Yet there is in these animals a more subtle sense than our perception which makes them recognize their own. The little dog has as yet no teeth, nevertheless he defends himself with his mouth against anyone who teases him. The calf has as yet no horns, nevertheless he already knows where his weapons will grow. Here we have evident proof that the instinct of animals is innate, and that in all beings there is nothing disorderly, nothing unforeseen. All bear the marks of the wisdom of the Creator, and show that they have come to life with the means of assuring their preservation.

The dog is not gifted with a share of reason; but with him instinct has the power of reason. The dog has learnt by nature the secret of elaborate inferences, which sages of the world, after long years of study, have hardly been able to disentangle. When the dog is on the track of game, if he sees it divide in different directions, he examines these different paths, and speech alone fails him to announce his reasoning. The creature, he says, is gone here or there or in another direction. It is neither here nor there; it is therefore in the third direction. And thus, neglecting the false tracks, he discovers the true one. What more is done by those who, gravely occupied in demonstrating theories, trace lines upon the dust and reject two propositions to show that the third is the true one?

Does not the gratitude of the dog shame all who are ungrateful to their benefactors? Many are said to have fallen dead by their murdered masters in lonely places. Others, when a crime has just been committed, have led those who were searching for the murderers, and have caused the criminals to be brought to justice. What will those say who, not content with not loving the Master who has created them and nourished them, have for their friends men whose mouth attacks the Lord, sitting at the same table with them, and, whilst partaking of their food, blaspheme Him who has given it to them?

But let us return to the spectacle of creation. The easiest animals to catch are the most productive. It is on account of this that hares and wild goats produce many little ones, and that wild sheep have twins, for fear lest these species should disappear, consumed by carnivorous animals. Beasts of prey, on the contrary, produce only a few and a lioness with difficulty gives birth to one lion; because, if they say truly, the cub issues from its mother by tearing her with its claws; and vipers are only born by gnawing through the womb, inflicting a proper punishment on their mother.

Thus in nature all has been foreseen, all is the object of continual care. If you examine the members even of animals, you will find that the Creator has given them nothing superfluous, that He has omitted nothing that is necessary.

To carnivorous animals He has given pointed teeth which their nature requires for their support. Those that are only half furnished with teeth have received several distinct receptacles for their food. As it is not broken up enough in the first, they are gifted with the power of returning it after it has been swallowed, and it does not assimilate until it has been crushed by rumination. The first, second, third, and fourth stomachs of ruminating animals do not remain idle; each one of them fulfills a necessary function. The neck of the camel is long so that it may lower it to its feet and reach the grass on which it feeds.

Bears, lions, tigers, all animals of this sort, have short necks buried in their shoulders; it is because they do not live upon grass and have no need to bend down to the earth; they are carnivorous and eat the animals upon whom they prey.