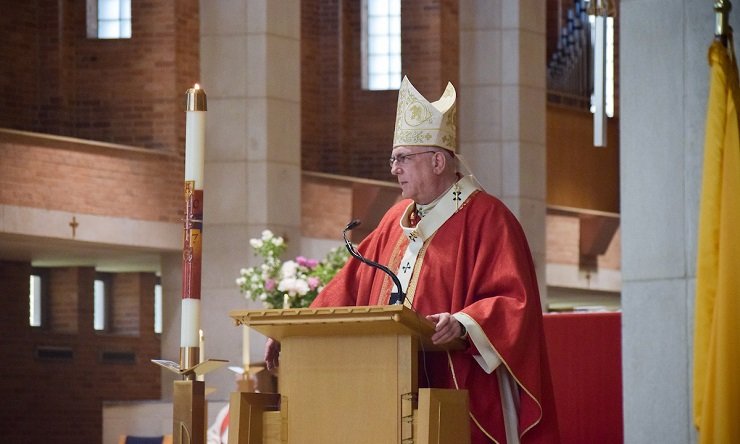 Archbishop Joseph Naumann has one urgent task for Catholic Kansans this October.

“The single most important action you can take this Respect Life month is to sign the petition urging our elected representatives to support the passage of a constitutional amendment,” he said.

Kansans aged 18 and up can sign the petition here.

Archbishop Naumann holds an honorary degree from Benedictine College, which is located within his Kansas City, Kansas, Archdiocese. He is also chairman of the U.S. bishops’ Committee on Pro-Life Activities.

Naumann said a constitutional amendment is necessary after an unprecedented attack on the right to life by the Kansas governor and state Supreme Court.

“Some will claim our efforts to be political. They are not. We are not supporting any politician or political party but advocating for the most fundamental human right,” Archbishop Naumann said. “Just as churches led the efforts to abolish slavery, end racial discrimination and promote civil rights, so people of faith have an important role to play in advocating for the protection of innocent human life.”

The first of the attacks on the right to life came on April 22, when Kansas Gov. Laura Kelly vetoed a bill which would have required that women be informed of their ability to reverse the early effects of the days-long abortion pill process. The Mifepristone pill, known widely as RU-496, is a major profit center for the abortion industry,

Then, on April 26, the Kansas Supreme Court ruled that the Unborn Child Protection from Dismemberment Abortion Act violates the state constitution’s Bill of Rights, which the court asserted guarantees a right to abortion.

The court’s decision “would be laughable were not its consequences so deadly serious,” said Archbishop Naumann.

The Kansas Constitution’s Bill of Rights protects the right to life in Section 1, where it says: “All men are possessed of equal and inalienable natural rights, among which are life, liberty, and the pursuit of happiness.”

The Kansas Supreme Court claimed those words give the abortion industry the right to dismember children for profit. The court’s opinion says: “[T]his right to personal autonomy is firmly embedded within section 1’s natural rights guarantee and its included concepts of liberty and the pursuit of happiness.”

Archbishop Naumann pointed out that the Supreme Court’s action came despite the fact that “Thanks to ultrasound technology, the humanity of the unborn is undeniable.”

The tragedy of abortion goes beyond the death of the child, however.

“In addition to the more than 60 million children killed by abortion since its legalization in 1973, there are even more mothers and fathers carrying deep emotional, psychological and spiritual scars because of their participation in abortion,” said Naumann.

He said Kansas pregnancy assistance clinics, often funded and staffed by Catholics “are having a real impact in significantly reducing the number of abortions by surrounding mothers in the midst of an untimely pregnancy with love and practical support to choose life for their child.”

But the destruction of innocent human life by abortion, he said, “remains the pre-eminent human rights issue of our time, in part because of the magnitude of the numbers of lives destroyed.”

“The most American deaths in any of our nation’s wars were nearly 500,000 in the American Civil War. The number of soldiers killed in all wars combined throughout our history pales in comparison to the number of children killed by abortion,” he said.

All Kansas bishops joined him to say: “The immediate priority for all Kansans concerned with protecting the lives of unborn children, as well as pregnant women, from an unscrupulous abortion industry, is to pass a state constitutional amendment.”