Be Not Afraid to Offend! Says Abby Johnson, Others 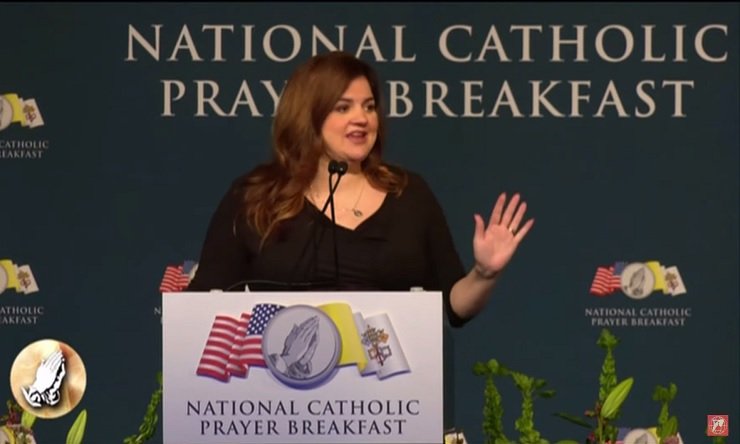 At the National Catholic Prayer Breakfast in Washington, D.C., on April 23, several speakers shared one particular message: Don’t be afraid to offend.

Abby Johnson was an unannounced speaker at the breakfast, which Benedictine College in Atchison, Kansas, has helped sponsor for more than a decade. She is the Planned Parenthood manager whose conversion to pro-life activist is dramatized in the movie Unplanned.

“Be willing to offend people with the truth,” she said. “The people on the other side of these issues are not in the least bit concerned about offending you. Be proud of your faith. Be bold in your faith.”

Her message became a theme of the event.

Phoenix Bishop Thomas Olmsted, one of the keynote speakers of the event, had the same message.

He noted that he was ordained in the same year that the Supreme Court’s Roe vs. Wade decision legalized abortion, and so the issue has loomed large throughout his priesthood.

As a bishop, he said, “My pastoral duty is to bear witness to the Gospel of Life.”

The same misunderstanding about the human person that led to abortion also led to the sexual abuse crisis, he said.

After the scandals, bishops have to promote healing for victims and honesty from the Church, but also have to “defend the inconvenient truths of the Gospel,” he said. “Bishops owe this to you and to the Lord himself. I owe you and the Lord clarity in my teaching.”

He said Catholics should not be afraid to oppose gender ideology.

“Marriage stands now in the way of gender ideology,” he said. “We Christians must stand up for this reality of marriage today in our homes and in the public square, despite the real risk of persecution for doing so.”

Where can the boldness to oppose prevailing opinion come from?

Martin founded FOCUS (the Fellowship of Catholic University Students) at Benedictine College in 1998.

“They live side by side,” he said. “We each belong to one or the other, but regardless we each have a spark in us that is for the other city.”

If on the one hand the godly are too often seduced by secularism, he said the converse is also true: Even in the most adamant atheist there remains a small spark of God.

He called on the audience to fan the sparks into flame.

“At various times we have lost our way and have had a great awakening, usually called by Evangelical Christians,” he said. “Wouldn’t it be a great time for a Catholic Great Awakening? One where we would be the ones to call out for mercy?”

Sister of Life Bethany Madonna inspired the audience to follow this difficult message.

“We need a century of saints and the master chose you for such as this,” she said.

She said that this Holy Week a passage struck her that she had not noticed before: The line from the Palm Sunday Gospel explaining how the apostles were to untether a colt and say, “The Master has need of it.”

“That he would have need of anything pierces us to the heart,” she said, “But God chose to need us … he made the fulfillment of his plans contingent on us.”

The donkey in the Gospel had never been ridden before, noted Sister Bethany. She said we may be in that same category.

“We are inexperienced and weak,” she said, but we are also “chosen and necessary. God chose the weak to bear the strong. He shows forth his glory in what is unlikely. The master has need of you. You carry Jesus. You are his ride in to today’s Jerusalem.”

Bishop Olmsted agreed. “We were made for such a time as this. God created us for just such circumstances,” he said.

Abby Johnson said the movie Unplanned is evidence that an unapologetic presentation of the truth can bear fruit. “Every day I get dozens of messages who tell me that they walked into the theater pro-choice and walked out pro-life,” she said.