Beloved Monk Brought a Springtime of Faith to Benedictine and Beyond 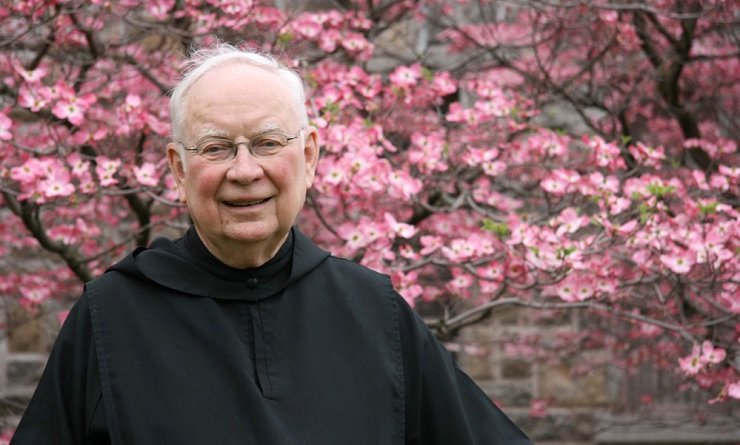 One of the last honors the priest received in life is one of the most significant for Benedictine College in Atchison, Kansas.

The Founders Award from the Fellowship of Catholic Scholars was symbolic of the big impact this one monk had on the faith at Benedictine College and, through it, on America.

The Fellowship of Catholic Scholars met at Benedictine for their September 2018 convention and gave the monk their Founders Award — pointing out that he helped organize their first convention 40 years earlier.

But that wasn’t the only higher education fellowship Father Denis helped in its infancy, said President Stephen D. Minnis. The Fellowship of Catholic University Students, FOCUS, was founded at Benedictine College in 1998, encouraged and supported by Father Denis, who was then Chair of the Theology Department.

“Father Denis had an unbelievable impact on the college that is still felt today,” Minnis said. “It was Father Denis’s vision when he headed the Theology department to have a strong Catholic identity. Under his leadership the current Chair of the Theology department, Dr. Richard White, as well as Dr. Ted Sri were hired.” Dr. Sri helped Curtis Martin found FOCUS on campus.

Meade is fondly remembered by generations of Benedictine College students.

“Father Denis is clearly a special person,” Patrick Carr, a 1994 graduate of Benedictine College and acurrent member of the board, told Kansas Monks, the Abbey newsletter. “He was such a welcoming spirit and inspirational teacher — I connected with Father Denis the first time I met him. So over the years we developed a friendship. My wife Kate also had Father Denis as a professor. We appreciated him so much that we asked him to officiate at our wedding after we graduated.”

Father Denis was a monk of St. Benedict’s Abbey, on Benedictine College’s campus, where the story is told of how Brother Matt, a gardener, predicted Father Denis wouldn’t last as a monk.

“After I made my profession, after a year, in joking I asked ‘Brother Matt, which ones of these novices are going to stay and which ones are leaving?’” said Father Denis.

“Why not?” asked Father Denis.

“When you came, I thought ‘Shucks, that fella’s gonna leave in three weeks,’” said Brother Matt.

In fact, Father Denis would become the senior monk of St. Benedict’s Abbey.

He was at Dowling Catholic High School in Des Moines, but “I had a friend there who transferred to Maur Hill in Atchison,” Father Denis told the Abbey’s newsletter. “Interestingly, by the time I transferred there the next year, he had been expelled. I understand he was a good benefactor of Maur Hill over the years, nevertheless.”

Father Denis moved on to Benedictine College (then St. Benedict’s College) in 1947 and lived in a special residence for young men considering religious life.

“At that time it was customary for those who were interested in becoming [monks] to enter the Abbey after their sophomore year in college, so that’s’ what I did,” he said.

He became Brother Denis when he made his first vows on July 11, 1950, when he was not quite 20. Two years later he began studies at the Pontifical Atheneum of Sant Anselmo, the international Benedictine college in Rome.

Brother Denis studied theology at Sant’ Anselmo from 1952 to 1956, and then canon law at the Pontifical Lateran University from 1956 to 1961. During breaks from school, instead of returning to Atchison, which was not feasible at the time, he explored Bavaria, Austria, France and Belgium.

He professed solemn vows on May 26, 1953, in a chapel of Monte Cassino, the cradle of the Benedictine order. He was ordained a deacon on Sept. 8, 1954, at the Abbey of St. Paul of Wisques in northern France. He also spent a short time at the Abbey of Saint Andres in Bruges.

As the Abbey tells the story, a part of Father Denis will always remain in Bruges — literally.

“I also had the good fortune of leaving my appendix there,” Father Denis told the Abbey’s newsletter.

He was ordained a priest on June 28, 1955, at St. Peter’s Abbey in Assisi, Italy, by Bishop Placido Nicolini, OSB.

Finally back in Atchison, Father Denis taught in St. Benedict Abbey’s internal seminary and then at Benedictine College.

His Theology work was interrupted with a stint at St. Joseph Priory in Mineiros, Brazil from 1987 to 1989. Father Denis would later return to work in Brazil from 2001 to 2005, where he worked with the parish, the marriage tribunal, and in the formation of new monks.

“Brazilians are warm, affectionate and hospitable,” Father Denis would remember.

Back in Atchison, he served as postulant director and junior master for year before retiring.

“It’s a source of happiness now, that after some years of drought, we are experiencing a steady entrance of new members at the Abbey,” said Father Denis. “One of the nicest things I’ve experienced after coming back from Brazil is helping all these men get their start. So now our monastery is becoming young again.”

Msgr. Mike Mullen of the Archdiocese of Kansas City-Kansas also pointed out at the June 29 ordination of the Abbey’s Father Luke Turner, OSB, came shortly after the death of Mullen’s former spiritual director, Father Denis.

Father Meinrad Miller, another key figure in the renaissance of faith life on campus, called Father Denis “a faithful monk and priest.” He told the Abbey newsletter:

“When he came back [from Italy] with his doctorate, it was an interesting time. There was a lot of upheaval and changes. But I think he was a steadying force. He neither wanted to go back to the way things were in the old days or throw everything out the window. He’ll be remembered as reasonably looking at the signs of the times and helping us to evaluate which way to go.”

He will also be remembered for the wisdom he imparted to students, monks in formation, and the readers of Kansas Monks.

“Don’t be conceited about the thought that you have accumulated a lot of wisdom,” Father Denis said. “Look back over your years and thank God that people have forgotten the embarrassing things you’ve done, and be grateful for the presence of the Lord in your life.

“Be grateful for whatever good you’ve been able to do, and the tolerance people have given you throughout the years when your performance has been mediocre,” he continued. “Or maybe under-motivated.”

That wisdom has done great things for the college.

“Father Denis set the stage for where we are today — known for our commitment to the faith and ranked as a top 20 Catholic university by the Cardinal Newman Society,” said President Minnis.