Benedictine: A Better Investment Than Harvard? 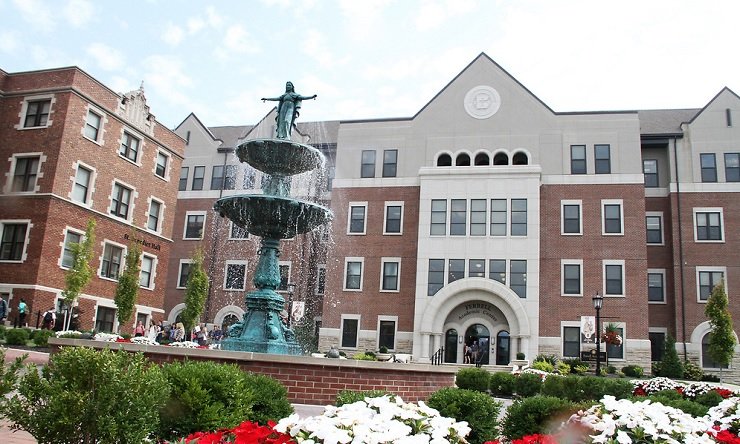 As Benedictine College gets serious about its plan to transform culture in the America, the obvious question arises: Why Benedictine? Why not some other school.

Could it possibly be that a small, Catholic liberal arts school is a better investment than an elite Ivy League or equivalent school?

George Weigel and Archbishop Joseph Naumann each made that case recently.

In his column published April 3, 2019, George Weigel shares a story about a recent talk he gave at a Catholic prep school.

The question and answer session, he said, “was full of contention when I said that a first-class liberal arts education at a college or university with a strong Catholic identity would prepare their sons and daughters for anything. Absolutely not, parents insisted. The kid had to get into Harvard, or Stanford, or Duke — or some other academic version of the high-priced spread — lest his or her life be ruined.”

Weigel explained how the discussion went:

“When I pointed out that undergraduates at so-called ‘elite’ universities are frequently taught by graduate assistants rather than by senior faculty, the parents were unmoved.

“When I reminded them that few, if any, members of the philosophy departments at elite schools are convinced that there is something called ‘the truth,’ rather than just ‘your truth’ and ‘my truth,’ they didn’t budge.

“When I cited the experience of my daughters, who had gone on to premier graduate schools and successful professional careers after attending a small, demanding Catholic liberal arts college, I was met with blank stares.

“When I asked why they were willing to spend north of a quarter-million dollars to send their children into a decadent environment in which corruption (chemical, intellectual, sexual, political, or all-of-the-above) was a real and present danger, the mantra continued: the kid must attend an elite school to have any chance in life, because that’s where you begin to ’network.’”

He said that he wanted to give every parent a copy of Tom Wolfe’s novel, I Am Charlotte Simmons. “It’s quite raw at certain points, I warned. But the story of how an idealistic, intelligent young woman who makes it into an elite school gets corrupted, first intellectually and then morally, ought to give pause to even the most overwrought parent. …. Fortunately, Catholic parents serious about real education and real formation have other options.”

Weigel listed Benedictine College as one of them.

His argument was reminiscent of a column by Archbishop Joseph Naumann which argued that Benedictine College was a better investment than Harvard, because parents are better served by “institutions of higher education where faith and reason are recognized as two avenues that lead to the same destination — truth.”

He quoted a Newsweek magazine article called “Harvard’s Crisis of Faith: Can a Secular University Embrace Religion without Sacrificing its Soul?”

Lisa Miller, the author of the article, wrote that: “In practice, the Harvard faculty cannot cope with religion. It cannot agree on who should teach it, how it should be taught, and how much value to give it compared with economics, biology, literature, and all the other subjects considered vital to an undergraduate education.”

Noting that Harvard began as a religious school, Archbishop Naumann spelled out how far “elite” schools have fallen:

“In reality, many secularists deny the existence of universal truths. Unfortunately, it is this secular nihilism that dominates much contemporary art, literature, film and, unfortunately, higher education. By denying universal truths, accessible to all through reason, the requisite foundation for a commonly accepted moral code is also destroyed.

‘In contrast, Catholicism embraces that there is indeed objective truth. Faith and reason are complementary paths leading to a common end. Authentic higher education is a place where faith and reason intersect, where these two avenues to the truth are honored and explored.”

So, is Benedictine College better than Harvard? In one sense, of course it isn’t — elite educational schools demand the best, hire the highest caliber faculty, and their graduates are in the highest reaches of social leadership.

But Weigel and Naumann make compelling cases for what a school like Benedictine College uniquely offers: an education that builds authentic community, thriving faith and scholarship that acknowledges the truth.

That is enormously valuable — and it’s likely to become even more so, as relativistic and ideologically hidebound schools become more and more irrelevant.