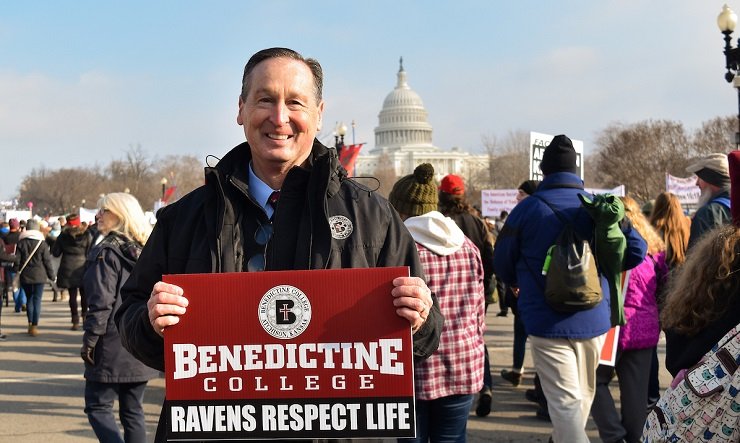 He and other Catholic leaders will bring their policy concerns and ask questions about federal action on issues of importance to Catholics.

President Minnis’ message: Catholic organizations should be allowed to provide the services only they can provide.

“He indicated that I should come prepared to discuss issues that Catholics — and in my case, Catholics in higher education — care about,” Minnis said. “Naturally, life issues and religious liberty are top of mind for us.”

Minnis said he will focus on three points, and leave behind information on each.

“The Church has built an incredible network of educational, healthcare and social institutions which provide important services to our cities, states and nation,” Minnis said. “But regulations requiring those who serve in the public square to violate their consciences on the right to life and the sanctity of marriage are threatening this important work.”

Second: “Catholic colleges need the freedom to strengthen our communities.”

He said he was particularly concerned that “free college” plans for a government grab of the higher education sector would undermine and ultimately destroy many private faith-based institutions:

Last, Minnis said “Catholics need the right not just to worship but the ‘free exercise of religion,’ allowing us to prepare students for all walks of life. Too often, aggressive secularization and overreach by government and quasi-governmental bodies make it impossible for Catholics to contribute fully.”

This is not the first time President Minnis has been tapped to represent Catholic higher education. He was invited to participate in the U.S. bishops’ Ex Corde Ecclesiae working group and the Vatican’s “Church in America” conference.

“I am honored to be invited but I know that they aren’t inviting me as much as they are acknowledging the national reputation Benedictine College has for our commitment to the faith and to Catholic higher education,” said Minnis. “That Benedictine College is included in opportunities like this is due to our strong faculty, administration, and board of directors.”

Image: President Minnis outside the U.S. Capitol Building at the January March for Life in Washington, D.C.