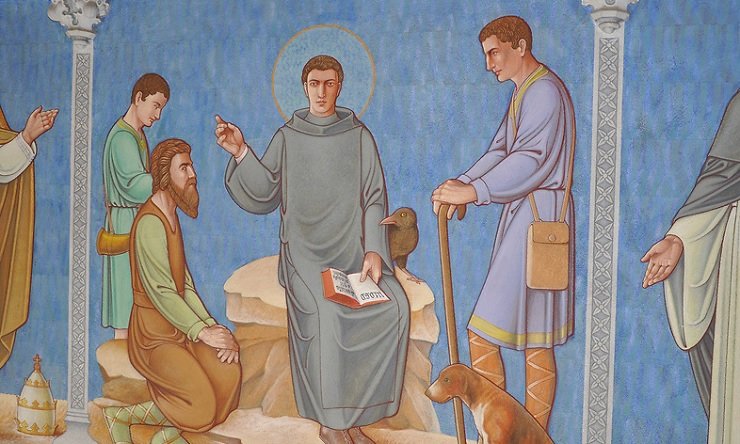 Diving Into the Thorns

Abbot James is Abbot of St. Benedict’s Abbey in Atchison, Kansas. What follows is an excerpt from his homily on March 21, the Solemnity of the Passing of Holy Father Benedict. He began the homily by reading a passage from the Life and Miracles of St. Benedict by Pope St. Gregory the Great.

“On a certain day being alone, the tempter was at hand …  [St. Benedict] was assaulted with such a terrible temptation of the flesh, as he never felt the like in all his life. A certain woman there was which some time he had seen, the memory of which the wicked spirit put into his mind, and by the representation of her so mightily inflamed with concupiscence the soul of God’s servant, which so increased that, almost overcome with pleasure, he was of mind to have left the desert.

“But, suddenly assisted with God’s grace, he came to himself; and seeing many thick briers and thorn bushes to grow hard by, off he cast his apparel, and threw himself into the midst of them, and there wallowed so long that, when he rose up, all his flesh was pitifully torn. So, by the wounds of his body, he cured the wounds of his soul, in that he turned pleasure into pain, and by the outward burning of extreme pain, quenched that fire which, being nourished before with the fuel of carnal cogitations, inwardly burned in his soul: and by this means he overcame the sin, because he made a change of the fire. From which time forward, as he afterward reported to his disciples, he found all temptation of pleasure so subdued, that he never felt any such thing.”

What can we take from this story of St. Benedict and the thorn bush?  The path to sainthood is not for the faint of heart.

Whenever the cross is involved, there will be trials. There will be trials and challenges that might seem impossible to overcome. Yet where there is temptation there will be grace and virtue all the more to accompany us. Our human condition, our human heart, so easily leads us down the path away from goodness.

Jesus is clear in the Gospels that these foul manifestations of our human nature are the vices we find in our hearts. It is not the food or drink or images that profane; the source is not some external unmentionable that has caused the violation, but what comes forth from the human heart.

To confront a struggle in sin is not to heap pleasantries of faith, one on top of the other, to make us feel good. Rather we need a conversion to reality, to see that it demands of us a more radical and internal battle in our heart. We must acknowledge that we don’t always have control of the passion or thought in our heart, but we do have the freedom to choose whether to entertain those thoughts or to do battle against them.

The desert father Evagrius wrote:  “Whether or not we are troubled by all these [thoughts] does not depend on us.  We may, however, be able to choose whether to prolong them and whether they move us or not.”

A passion, an unprompted feeling, a thought that comes out of the blue is not always culpable, we are not always culpable for them; they are burdens we must bear — they become sin only when our free choice gives to assent; when anger becomes an act of aggression, or lust gives birth to unchastity.

St. Benedict is an example of temptation entangling even the most holy of people, yet also the example of one who directs his desire toward conversion. In our human nature we will encounter struggle – whether we choose to be realistic about it or not, it will determine our ability to experience victory over those struggles. We all must be prepared, in whatever vocational journey God calls us, for that temptation which will surely come. Down whichever vocational path God calls us there will be this inner struggle.

To be quite frank, and hopefully not too brash, whether we are called to the priesthood or consecrated life, or to the married state, the vows we take do not cause the flip of some switch within us that will take all of our passions away — they continue to be present. St. Benedict calls it a battle, a battle to be fought with the holy weapons of obedience. We all need to be prepared for temptation whether at the beginning of our journey or at the end; the struggle will be present.

St. Aelred, the Cistercian monk, warned is brothers:  “It is written, however, ‘Son you have come to the service of God.  Stand bravely and prepare your soul for temptation’ (Sir. 2:1).  Immediately the affection for sins, the memory of delights, and long-lasting habit attack the poor soul from every side and cause it trouble.”

Denial of this struggle, denial of this battle that is going on within us, this interior division, will only lead us eventually to a hardness of heart. So, what actions can we take to do this holy battle short of throwing ourselves into a thorn bush?

We monks in the Abbey are reading for Lent the book by the monk Fr. Michael Casey entitled, Grace; On the Journey to God — I highly recommend it.

First, we need to actively detest the vice and to call it by its name instead of hiding behind denial and rationalization.

Second, we need to accuse ourselves honestly, at least in the privacy of our conscience.

Third, we need to act as our own prosecutors and make a case against the vice, to think through our situation honestly and try to construct a reasoned argument for improvement.

Fourth, we need to listen to the reproaches of others, including those nearest and dearest to us.

Finally, we need to ask God to extinguish the vice, so as to come before God in all simplicity, recognizing our inability to combat it, and our need for his grace.

This is excerpted from Kansas Monks.
Image: St. Benedict statue in Haverty Circle at Benedictine College.