These Catholic Heroes Made the Ultimate Sacrifice 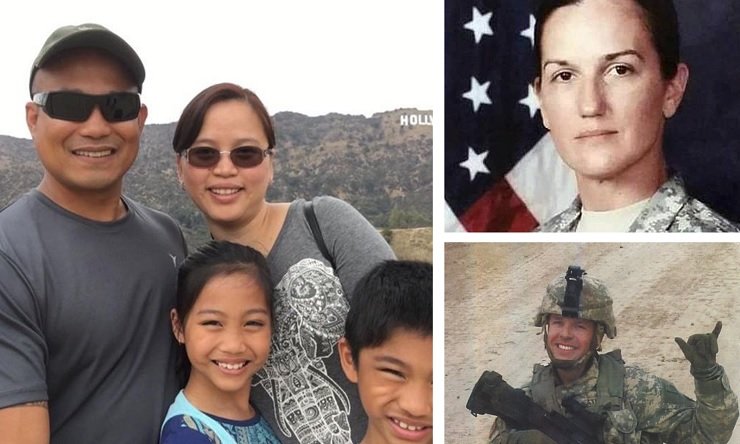 Memorial Day honors the best America has to offer — and helps define what heroes are.
We are amazed by those who die for their country because they have made a sacrifice we couldn’t or wouldn’t make, their love was able to set partisanship and personal preference aside to a rare degree, and because they mastered virtues most of us lack.

Here are three Catholic Memorial Day heroes who died, or were honored, this year.

We dream of having the discipline and self-possession that made Reymund Transfiguracion a hero.

Army Special Forces Sgt. 1st Class Reymund Transfiguracion is one of the many immigrants who move to America, love their new country, and then give their lives for it.

He died last August at age 36 from wounds inflicted by an Improvised Explosive Device in Afghanistan. His wife, Edelyn, and his children, Ella and Rylan, mourned him at his funeral Mass at St. Michael of the Archangel Church in Kailua-Kona, Hawaii.

He was born in the Philippines in 1982 and worked on his family farm producing coffee beans and macadamia nuts. “We had nothing,” his brother said. But Reymund did have a Green Berets poster to hang on his wall.

Reymund earned his American citizenship before his 18th birthday, moved to Hawaii and soon joined the Army, where he was delighted to be selected for Special Forces training at Fort Bragg, North Carolina.

He led a battalion on 40 combat operations, and freed more than 100 prisoners from a Taliban jail.

“He saved my life many times. He saved a lot of people’s lives,” said Staff Sgt. Tom Smith. “I’m standing here today because of Rey. And there are other people who get to be home with their families because of the actions of Rey.”

“He was a good brother, a better [person] than me,” his brother, Rey Ian said. Reymund taught his children to respect and help their mother, he said, teaching them to make pancakes for her when he was deployed.

The power to love everyone she met is what made Army Reserve Sgt. Holli Bolinski a hero.

Sgt. Holli Bolinski’s death is a reminder that combat isn’t the only killer of our troops overseas. She was on Army Reserve duty in Kuwait last March when she died in a car accident, Stars and Stripes reported.

She was 37 and the mother of five, a beloved member of St. Bruno’s Catholic Church in Pinckneyville, Illinois.

“She made a lasting impression on each person she came in contact with,” said a friend on her obituary site.

“Holli was always the friendliest parent on the sidelines at Junior Panther football practices,” said another.

But the most touching testimonies came from military colleagues.

“I have known Holli for six years,” said Jessica Ridenour. “She was one of the most driven and professional soldiers I have ever worked with. … She deeply cared for her country, her family and others.”

Bradley Wills, who served with Bolinski for years, said: “Holli was always the light in every room … She had the uncanny ability to soothe any ruffled feathers and make everyone around her feel at peace.”

Staff Sgt. Travis Atkins is famous for his heroic death.

“He was this nation’s son.” That’s how Father Val Zdilla of Resurrection Parish in Bozemont, Montana, remembered his parishioner Staff Sgt. Travis W. Atkins when he died.

Last March, President Donald Trump remembered Atkins in the same way — by awarding him a posthumous Medal of Honor.

Atkins died in Iraq in 2008, on his second tour there. He had left the army in 2003, but then re-enlisted to serve his country again.

On June 1, 2007, doing a security check in the town of Abu Sarnak, Atkins and three others were confronted by a group of insurgents, one of whom was wearing a suicide vest. Atkins “selflessly tackled the suicide bomber in a bear hug, pinning him to the ground and shielding his soldiers from the imminent explosion,” his Distinguished Service Cross citation says.

Putting others before yourself doesn’t happen automatically. It comes from a way of life.

Atkins’ mother remembered the last call she received from him. He was worried that his Mother’s Day card hadn’t arrived on time.

“Travis’ first love was for his 11-year-old, Trevor,” said his obituary. “He cherished the time he could spend with Trevor and included Trevor in all of his outdoor activities.”

“He was a great soldier and a great father,” Trevor said, 12 years later, at the Medal of Honor ceremony. “He was my icon.”

We all want to live so that these things can be said about us when we die, but we are painfully aware that we are not there yet.

Recognizing the virtues you lack is the first step toward self-improvement. The next, most important step is the one each these stories epitomize: Forget self-improvement and learn to live for others.

The ultimate test is to be willing to die for others, too.