Benedictine College’s new short film Lemke: A Founder’s Miracle tells the story of Father Henry Lemke being saved on a Kansas night when he prayed to the Blessed Virgin Mary. (Watch above or click here.)

The film debuted online today after being previewed at the Scholarship Ball on Feb. 23. Benedictine College President Stephen D. Minnis told attendees at the event:

“This film I hope gives you some insight as to why we believe that Benedictine is a chosen place — chosen by the Blessed Virgin Mary to be here at this special place and chosen by her to be as successful as we are.”

In 1856, college founder Father Henry Lemke was weakened, lost and alone amid rising waters when he prayed to Mary for his life. At that moment, a lit lantern appeared in a window, and guided Father Lemke to safety. He later learned why: A child had been awakened in the night by “a lady dressed in white” and her mother had lit the lantern as a result. “The Mother of God worked a miracle!” he wrote.

Benedictine College was founded in 1858, the year the same “lady dressed in white” appeared to another girl in a small town: Bernadette in Lourdes, France.

“Filming this story of Mary’s intercession gave me new respect for what the Benedictines went through in bringing the Gospel to my hometown,” said Nathan Pickman, the college’s Digital Media Manager and the video’s creator. 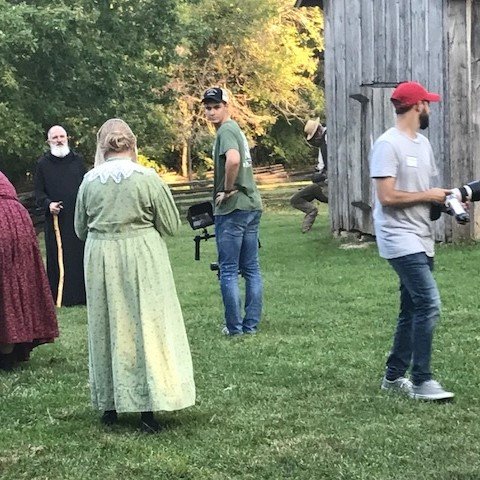 The part of Father Lemke in the film is played by the Prior of St. Benedict’s Abbey, Father Gabriel Landis OSB, who kept his beard long for the role.

“Working on even a short film like this was eye opening,” he said. “A lot of work goes into this! But it was also eye opening to think about how much work Father Lemke had to do to establish my community of Benedictine monks in Kansas. His story is truly inspirational.”

Father Gabriel added: “As a fellow Lutheran convert, I am especially inspired by his story.”

The voice of Henry Lemke in the film is actor and narrator Nicholas Guy Smith. The mother in the film is played by Hayleigh Diebolt and the daughter by Swayzie Diebolt.

To the right, see the portion of the film shot at Missouri Town 1855 in Lee’s Summit, Mo.

Not shown in the film are additional comments on the incident by Father Lemke, who was a Lutheran minister before converting and becoming a Catholic priest. 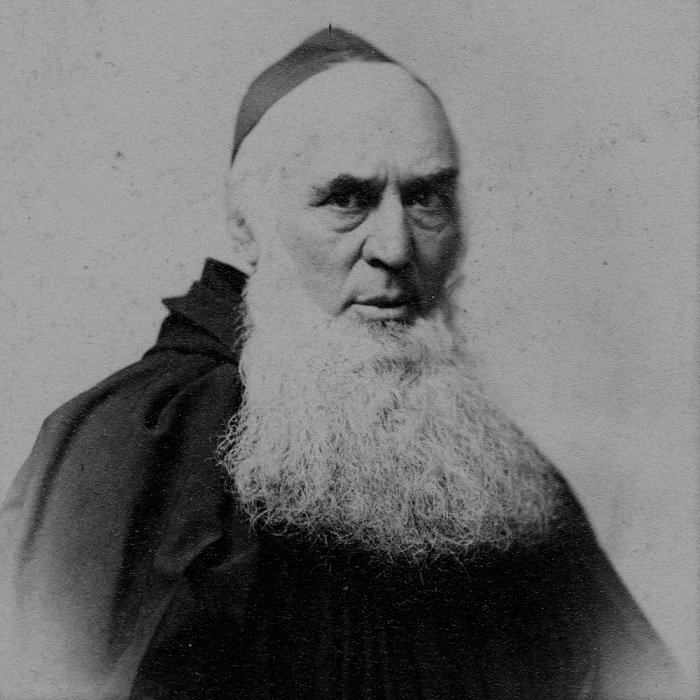 “Up to this point my honoring of Mary had been rather tepid, maybe even cold,” he said. “On this occasion, however, I called to her in fervent prayer, asking that I would not be allowed to come to an end out here so miserably unprepared.”

A history of St. Benedict’s Abbey reports that Father Lemke promised: “If you help me out of this difficulty, I shall always call on you.”

The Founder’s Storm Promise has been fulfilled many times over through the years, both by St. Benedict’s Abbey in Atchison and Mount St. Scholastica, the Benedictine sisters of Atchison.

On Sept. 8, 2013, Father James Albers OSB, the abbot of St. Benedict’s Abbey, consecrated the college to the Blessed Virgin Mary with an act co-signed by Sister Anne Shepard OSB, who at that time was the prioress of Mount St. Scholastica in Atchison. The college promotes individual consecration to Mary on campus every year, as well as a daily rosary at Mary’s Grotto, and a Wednesday morning Rosary led by the president and dean of the college.

This year, President Minnis dubbed the college’s most successful football team ever “Mary’s Team” for its key players’ commitment to the Rosary and Eucharistic Adoration. Click here to read more of Mary’s Miracles at Benedicitne College.

Just 40 years after Benedictine College was founded, the American Catholic Historical Society of Philadelphia commented on the significance of what Father Lemke had done.

“Under the ways of Providence, Father Lemke’s self-imposed exile from home and friends, and his sad days of tribulation were the means of bringing religious comfort and consolation to thousands unborn; for out of them grew the project of establishing a Benedictine monastery in Kansas.”