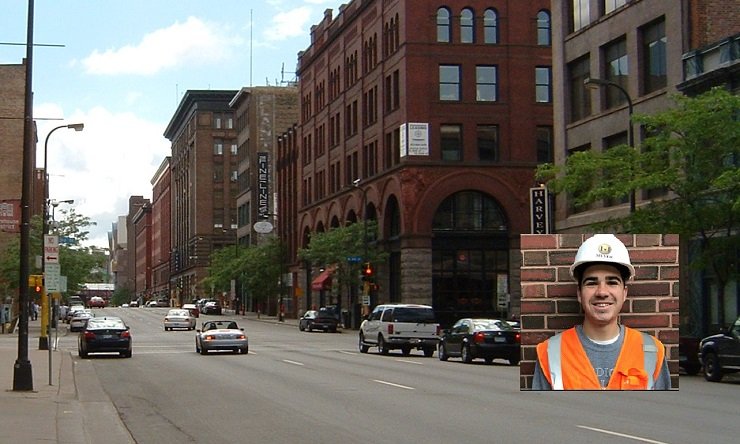 Will McCartney of Throckmorton, Texas, is a Gregorian Fellow at Benedictine College who will graduate in 2020 in Civil Engineering.

He recently completed an internship as a Field Engineer for Meyer Contracting in Maple Grove, Minn.

He worked on a multi-million-dollar road reconstruction project in the busy North Loop district of Minneapolis.

“I was on-site everyday as we removed and rebuilt 12 blocks of brick roadway, completed thousands of tons of soil correction, and salvaged historical materials,” he said.

His role was significant: He supervised an earthwork crew, quantified daily production, and served as a communication link between the superintendent and project manager.

“While this role provided me with invaluable field experience, my greatest takeaway from the summer was an understanding of the necessity of treating every employee, customer, and member of the general public with the upmost dignity and respect,” he said.

At the end, he had to give a twenty-minute presentation on the project to the senior leadership at Meyer Contracting.

“The construction industry often gets a bad rap — and sometimes it’s not entirely unwarranted — as male-dominated and rough around the edges, which results in an unhealthy social environment,” he said. He said it was the responsibility of leaders to change that perception.

“On my job site, I had zero tolerance for inappropriate comments, and I insisted that every person that comes across the job site be treated the same, whether it was a coworker, the president of the company, or a pedestrian walking down the street,” he said.

It starts with personal integrity, he said. “I’m a firm believer that it’s impossible to be an ethical engineer if you aren’t an ethical person and living out my values in the workplace is an extension of that.”

Benedictine College’s School of Engineering is the only engineering program in the country that also requires that its students take Ethics from the Philosophy Department and Christian Moral Life from the Theology Department. Benedictine College offers ABET accredited degrees in Mechanical, Civil, and Chemical Engineering disciplines. Its Electrical Engineering program grants ABET accredited degrees in cooperation with the University of North Dakota.

“As graduation draws closer,” McCartney said, “ I eagerly anticipate the opportunity to begin working as a competent, ethical, and Catholic civil engineer.”