Deep In History: Newman and the Immaculate Conception 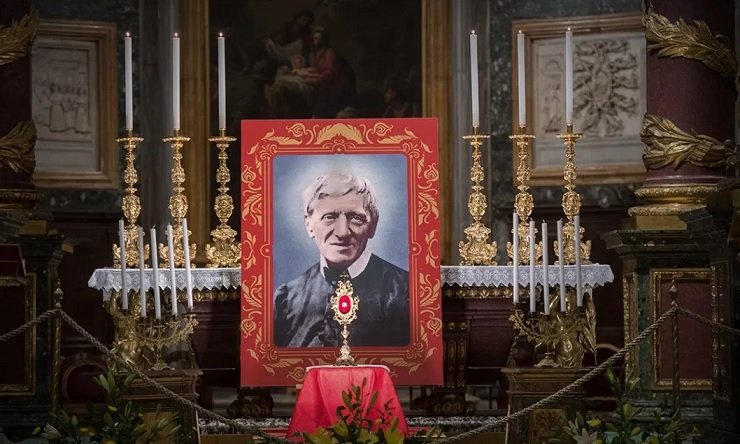 St. John Henry Newman said, “To be deep in history is to cease to be a Protestant.” This describes how he came to believe in the Immaculate Conception. The doctrine of the Immaculate Conception teaches about Mary that “from the first instant of her conception, she was totally preserved from the stain of original sin and she remained pure from all personal sin throughout her life.” Newman described in his Letter to the Anglican churchman Rev. Edward Bouverie Pusey how the Early Church Fathers  all attest to this belief. He ran down the evidence this way:

I shall adduce passages from their writings, noting their respective countries and dates; and the dates shall extend from their births or conversions to their deaths, since what they propound is at once the doctrine which they had received from the generation before them, and the doctrine which was accepted and recognized as true by the generation to whom they transmitted it.

First, then, St. Justin Martyr (A.D. 120-165), St. Irenæus (120-200), and Tertullian (160-240). Of these Tertullian represents Africa and Rome; St. Justin represents Palestine; and St. Irenæus Asia Minor and Gaul;—or rather he represents St. John the Evangelist, for he had been taught by the Martyr St. Polycarp, who was the intimate associate of St. John, as also of other Apostles.

“We know that He, before all creatures, proceeded from the Father by His power and will, … and by means of the Virgin became man, that by what way the disobedience arising from the serpent had its beginning, by that way also it might have an undoing. For Eve, being a Virgin and undefiled, conceiving the word that was from the serpent, brought forth disobedience and death; but the Virgin Mary, taking faith and joy, when the Angel told her the good tidings, that the Spirit of the Lord should come upon her and the power of the Highest overshadow her, and therefore the Holy One that was born of her was Son of God, answered, ‘Be it to me according to thy word.’”—Tryph. 100.

“God recovered His image and likeness, which the devil had seized, by a rival operation. For into Eve, as yet a virgin, had crept the word which was the framer of death. Equally into a virgin was to be introduced the Word of God which was the builder-up of life; that, what by that sex had gone into perdition by the same sex might be brought back to salvation. Eve had believed the serpent; Mary believed Gabriel; the fault which the one committed by believing, the other by believing has blotted out.”—De Carn. Christ. 17.

“With a fitness, Mary the Virgin is found obedient, saying, ‘Behold Thy handmaid, O Lord; be it to me according to Thy word.’ But Eve was disobedient; for she obeyed not, while she was yet a virgin. As she, having indeed Adam for a husband, but as yet being a virgin … becoming disobedient, became the cause of death both to herself and to the whole human race, so also Mary, having the predestined man, and being yet a Virgin, being obedient, became both to herself and to the whole human race the cause of salvation … And on account of this the Lord said, that the first should be last and the last first. And the Prophet signifies the same, saying, ‘Instead of fathers you have children.’ For, whereas the Lord, when born, was the first-begotten of the dead, and received into His bosom the primitive fathers, He regenerated them into the life of God, He Himself becoming the beginning of the living, since Adam became the beginning of the dying. Therefore also Luke, commencing the line of generations from the Lord, referred it back to Adam, signifying that He regenerated the old fathers, not they Him, into the Gospel of life. And so the knot of Eve’s disobedience received its unloosing through the obedience of Mary; for what Eve, a virgin, bound by incredulity, that Mary, a virgin, unloosed by faith.”—Adv. Hær. iii. 22, 34.

“As Eve by the speech of an Angel was seduced, so as to flee God, transgressing His word, so also Mary received the good tidings by means of the Angel’s speech, so as to bear God within her, being obedient to His word. And, though the one had disobeyed God, yet the other was drawn to obey God; that of the virgin Eve the Virgin Mary might become the advocate. And, as by a virgin the human race had been bound to death, by a virgin it is saved [Note 3], the balance being preserved, a virgin’s disobedience by a Virgin’s obedience.”—Ibid. v. 19.

Now, what is especially noticeable in these three writers, is, that they do not speak of the Blessed Virgin merely as the physical instrument of our Lord’s taking flesh, but as an intelligent, responsible cause of it; her faith and obedience being accessories to the Incarnation, and gaining it as her reward. As Eve failed in these virtues, and thereby brought on the fall of the race in Adam, so Mary by means of the same had a part in its restoration. …

And, besides the run of the argument, which reminds the reader of St. Paul’s antithetical sentences in tracing the analogy between Adam’s work and our Lord’s work, it is well to observe the particular words under which the Blessed Virgin’s office is described. Tertullian says that Mary “blotted out” Eve’s fault, and “brought back the female sex,” or “the human race, to salvation;” and St. Irenæus says that “by obedience she was the cause or occasion” (whatever was the original Greek word) “of salvation to herself and the whole human race;” that by her the human race is saved; that by her Eve’s complication is disentangled; and that she is Eve’s Advocate, or friend in need. It is supposed by critics, Protestant as well as Catholic, that the Greek word for Advocate in the original was Paraclete; it should be borne in mind, then, when we are accused of giving our Lady the titles and offices of her Son, that St. Irenæus bestows on her the special Name and Office proper to the Holy Ghost. …

I have drawn the doctrine of the Immaculate Conception, as an immediate inference, from the primitive doctrine that Mary is the second Eve. The argument seems to me conclusive: and, if it has not been universally taken as such, this has come to pass, because there has not been a clear understanding among Catholics, what exactly was meant by the “Immaculate Conception.” …

This is expressed in the well-known words of St. Augustine, All have sinned “except the Holy Virgin Mary, concerning whom, for the honour of the Lord, I wish no question to be raised at all, when we are treating of sins” (de Nat. et Grat. 42).