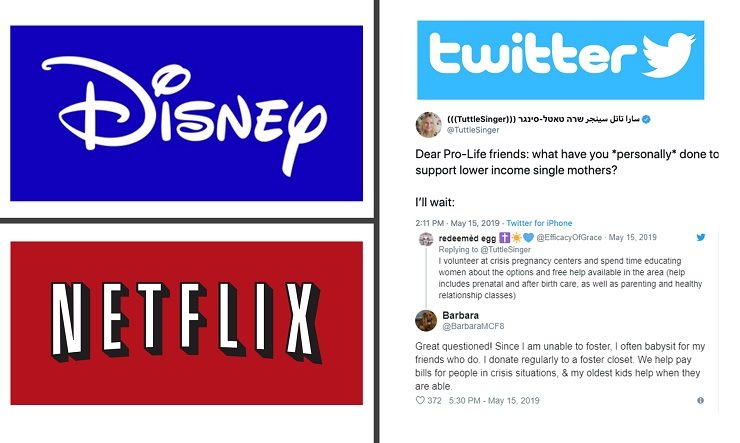 I have two new favorite pro-life answers to abortion advocates.

There has been a marked escalation of the abortion debate after Alabama’s governor signed the state’s Human Life Protection Act on May 15.

The anger opponents directed against these states’ voters — and against pro-lifers in general — has been at times ugly and at times inspirational.

Let’s start with the ugly.

Netflix and Disney threatened to boycott Georgia because of the state’s support for the right to life. Fortunately, Netflix has backed down. No word yet if Disney’s threat is real.

But Rebecca Teti wrote a terrific answer to the threats, showing up these corporations’ hypocrisy and extremism, including these examples:

“Disney has a theme park in China in spite of its gulag and other blatant human rights violations.”

“I expect there will be no more films set in the major European capitals, or on the Riviera, or in the Alps, or exotic Morocco, or most of South America, or anywhere in the Middle East or Africa. Most of the world restricts abortion after the first trimester. Even Sweden, with one of Europe’s most liberal abortion laws, bans abortion after 18 weeks.”

If you look outside our nation’s coastal cities, it turns out that Netflix and Disney, not Georgia and Alabama, are the extremists.

My other favorite pro-life answer is inspiring.

Sarah Tuttle-Singer, the pro-abortion social media editor of the Times of Israel reacted to the news out of Alabama by issuing a challenge in a tweet:

She expected an awkward silence from all those terrible pro-lifers who, she had been told, only care about human life before birth. Instead, she got an avalanche of more than 10,000 Twitter users responding to tell her what they have done.

“Last year alone, we raised a quarter million dollars to support families and centers who take in moms and their babies. We get them prenatal and postnatal care, help them get started on education, jobs, whatever they need,” the Daily Wire’s Senior Editor Emily Zanotti responded.

“We ‘adopted’ a young mother coming out of homelessness and have done all we can to provide her the support she needs to raise her two children,” said another respondent.

“Spent $40K to adopt a little girl with a chronic liver disease that was left on the doorstep of an orphanage at 2 days old,” one reply said.

“Started an organization that (among other things) supports hundreds of single mothers in developing nations as well as the US,” said another. “Raised my grandson,” said another.

“My parish runs a food pantry for low-income people and families,” said a priest. A Christian minister replied, “The church I Pastor financially and materially supports a crisis Pregnancy Center in town.”

“Drive them to appointments, threw a baby shower, work with foster and adoptive families, send gifts to new mothers, give resources to homeless women, our staff foster and adopt and much more!” the Pro-life group Created Equal tweeted.

Father Dan Beeman, the pastor of Holy Trinity Catholic Church in Norfolk, Va., tweeted: “I don’t think this thread went the way she thought this thread would go.”

To her credit, Tuttle-Singer was graceful in defeat. “I am delighted to see that there are good people out there supporting struggling single moms:) wish our government did more, too!”

The fact is, Catholics and other Christians have been pioneers in helping women in tough circumstances for years, with new service organizations growing up right alongside pro-life organizations. It is the pro-abortion side who refuses help to women.