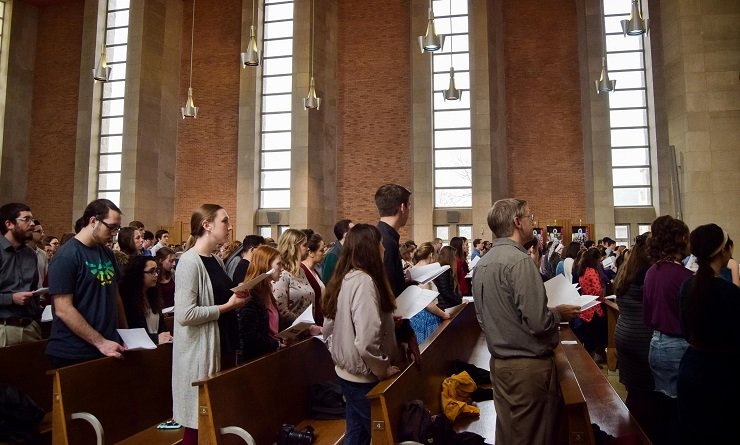 As a “cradle Catholic”, and a long-time holder of that title, I have experienced the changes in styles, mores, and attitudes affecting all aspects of worship over 50-plus years. Shirts and ties in Catholic grade school to shirts and plain pants (no Levis with pockets!) in high school. College worship in the late 1960s and early 1970s was pretty much “come as you are”, though I recall most Newman Center Mass attendees at Southern Illinois University-Carbondale were very modest and respectful in their attire.

I held myself to that standard into the adult work-life mode. Still, there was erosion in standards of attire abounding as the 1970s progressed. Yet, my recollection is modesty and respectfulness in attire in the churches I attended in my travels through my early employment days.

I did notice the “early departure creep”, folks leaving right after communion, and I never got a handle on what that was about, or the discussion of what arrival late arrival time was acceptable. There was actually a discussion about whether Mass attendance “counted” if you were seated by the time of the Gospel reading…. really? The other cultural issue with an unintended consequence was newspaper vendors set up in front of churches to sell their goods, supposedly after Mass, but, sure enough, people were checking the sports page during the homily until the pastor cracked down on that.

Attire is, to me, more of a reflection of culture more than a statement of a faith life (or lack thereof). Men keep their baseball caps on during the ballet or the symphony. I’ve seen it. Maybe you have, too. I saw it once or twice in church, so it must be so much an unconscious act, guys don’t realize it’s on there.

Writing in the June 19 online edition of “The American Thinker”, Elliot Eisenberg is writing about his experiences in Jewish worship, and what he’s experienced at his temple with “casual Shabbat”. Eisenberg describes the practice, running from summer to autumn as “dress as you please”, from coat and tie to casual attire. He objects, finding the practice distasteful:

First, we dress formally, in coat and tie, out of respect.  We attend a funeral in a dark suit and somber tie out of respect for the deceased and his survivors.  But Progressive clergy these days are hard at work on destroying respect for The Deity…. Second, it is of a piece with developing disrespect for liturgy that is thousands of years old.

Which brings me to the experience my wife and I have attending the Cathedral of the Immaculate Conception in downtown Kansas City, Mo. If you haven’t been to the Cathedral, you will be inspired when you are able to. It’s a wonderful worship space, with a very active, albeit small, permanent congregation.

We’re in one of those situations unique to that setting:

To coin a phrase, one size does not fit all, but I do maintain there’s a sign of communal respect, and a respect towards God involved in being present in self-respect. That doesn’t mean wearing a $500 suit. It’s not looking like you’re headed to a pool party after Mass.

The issue of dressing to show and mirror respect may have to be a “teaching” moment, one that likely begins, if not at home with family prayer and worship time, with reinforcement and encouragement in Catholic K-12 classrooms. There is tradition in community teaching, reflecting and admonition. Perhaps those lessons can be part of instruction on a pathway to eternal “success.”