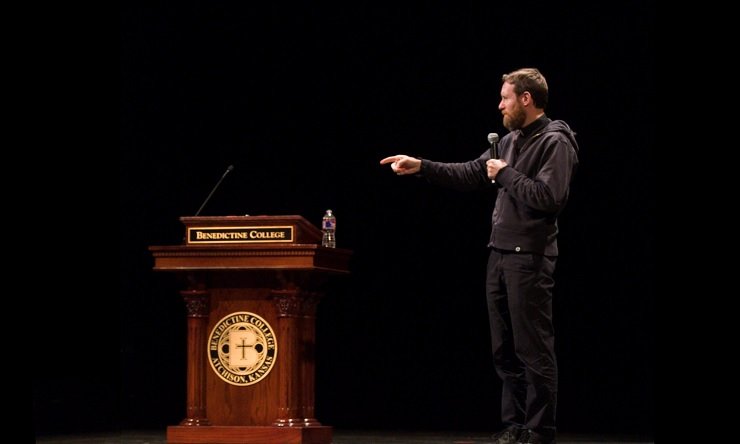 Are you a hypocrite? 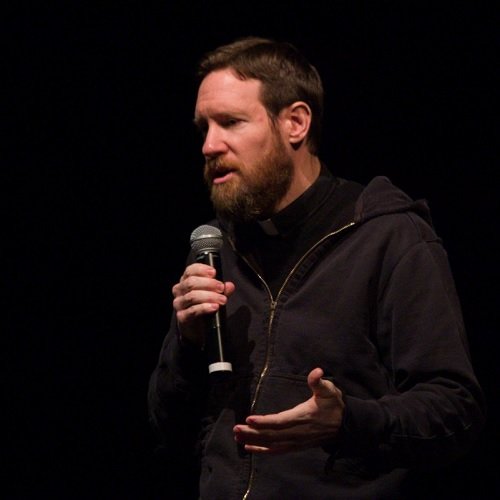 Father Michaael Gaitley made a surprise appearance at Benedictine College Feb. 4 where he shared his wisdom about what he sees as a central problem of our time: Professing faith while living differently.

The Marian of the Immaculate Conception priest’s talk was originally scheduled for one location on campus, but had to be moved to a bigger venue when attendance filled the room to overflowing.

Father Gaitley is author of the Marian consecration book 33 Days to Morning Glory and 33 Days to Merciful Love which focuses on the devotions of St. Thérèse of Lisieux and St. Faustina.

In 2013, the popular priest visited campus after Abbot James Albers consecrated Benedictine College to the Blessed Virgin Mary. He helped lead hundreds of students to consecrate themselves to Mary that year.

Here is some of what Father Michael Gaitley told the college audience on Monday.

“Vatican II was responding to a historical crisis, and that crisis is the modern world. The modern world in which we live is very good at creating a specific type of Christian: A hypocrite. I profess my Christian faith, and I live like the pagans.”

“You know what social media is really good at? Making us into narcissists who think about ourselves all the time.”

“In Russia, they have these buildings called poustinias. That’s the Russian word for desert. The only things in this little cabin are the Bible, a candle and an icon.  You go in and you bring in water and bread, and you spend 24 hours listening to the Word of God in silence. … When we began our retreat center, the first thing we did was built a poustinia. Twice the first winter, women used it. After they came out of their 24 hours of silence, I said, ‘What was that like?’  They both said the same thing: ‘It was the happiest day of my life.’”

“Paschal said the basic torture for modern man is to be silent and alone in his own room. We encounter God or we encounter our own brokenness. Why was it that these young people said the poustinia experience was the happiest day of their life? Because they encountered the Lord.”

“Mother Teresa told us who Jesus is, in the core of his heart. He is the words ‘I thirst.’ We will not understand Jesus if we do not understand his thirst.”

“Augustine said, ‘You made us for yourself oh God, and our hearts are restless until they rest in you.’ We are restless, so, we distract ourselves. We very rarely just sit with the thirst and let it hit us in the face like a Mack Truck and  take it. But when we do, that’s when we discover deep prayer, where our thirst for God meets his thirst for us.”

“What I came to realize is that the greatest gift that Jesus has offered to me as a priest was the intimacy with him in loneliness. Loneliness became not the enemy, it became the content and the means and the occasion of the deepest intimacy with Jesus, with who Jesus is in the core of his heart. That is the most beautiful part of the priesthood, and the religious life.”

“If you’re a pioneer of the thirst, then you can be there with the poor. They don’t necessarily have the distractions we have, so they have to face the cold, and the loneliness. The poor, spiritually speaking, are absolutely naked. They can’t hide anything.”

“The reality is all of us here want one thing: Love. We all want to be loved.  What are we all terrified of? Being alone. Since we were little kids, we probably learned that the way to get love is to get all ‘A’s, be the best in sports, be the most beautiful, be the most funny. Win. That’s how you get love. We think we have to earn God’s love just as we try to earn love from other people. What we miss is the central truth of the Gospel, the central truth of the good news. What is the good news of the Gospel? God doesn’t love us because we’re so good, but because he’s so good. “

“What are we trying to escape? Our phoniness, our anger, our slothfulness, our pride, our envy our hatred. What Jesus says is ‘Give it to me.’ God’s love for you doesn’t change. We’re the ones who change. We turn our backs on him and deny his goodness.”

“This is the Christian life, this one thing: God is my Father, and therefore I am infinitely precious and loved by God, no matter what.”