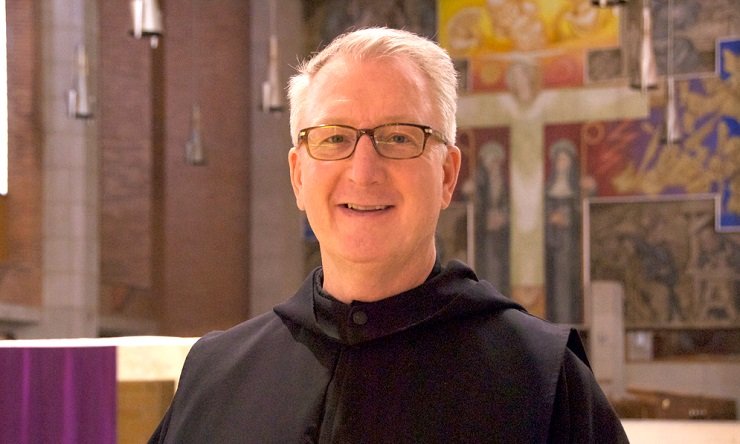 This year’s Sept. 3 Convocation at Benedictine College in Atchison, Kansas, featured speaker Candice Millard, a New York Times bestselling author of several popular historical books, including her latest — Hero of the Empire, about the young Winston Churchill’s daring escape from a prisoner of war camp.

Each year the college invite an alumnus back to be the homilist for the Opening School Mass. This year, new Raven priest Father Luke Turner of St. Benedict’s Abbey was chosen. Not only is he a former student (30 years ago!) and new priest, but he is also the new director of College Ministry for the college.

Go be great, be strong and courageous, do not be afraid, do not be discouraged, for the Lord will be with you wherever you go (Joshua, chapter 1 — verse 9)

These are all synonyms for greatness. And in addition to that — they all help to comprise my prayer for each one of you. Not only as we begin this new academic year but more importantly, as each one of you contemplates how you will use the God-given talents, knowledge and your faith to achieve the greatness God has intended for you.

My name is Father Luke Turner and I am currently serving as Director of College Ministry here at Benedictine College. I know some of you are aware that standing before you this morning is a newly-ordained priest. I know my blond hair may be deceiving in terms of my youth, but it’s true, I was ordained to the priesthood this past summer — June 29 to be exact. There’s a “whole lot of story” behind my ordination and while we don’t have enough time for me to convey the entire account in detail instead, I will share some of the highlights of my journey.

We are all called to greatness and tucked inside of this call, each of us also has a longing for God. How does God see greatness? Greatness is dynamic. We may not see our own greatness but God does and he puts special people in our lives that help us to recognize our aptitude for greatness. I know I’ve had many people help me along the way — however God plants seeds in our hearts by the circumstances of our lives. The most important seed planted in my heart is from my mother. She not only planted that seed through her prayer life and example but she nourished it faithfully for over thirty years.

Let me tell you how. I graduated from Savior of the World Seminary, not far from here in 1979. Savior was a Catholic prep school specifically for young men discerning a vocation to the priesthood. I had long thought about becoming either a doctor or a priest. I do know at one point I dreamed of becoming a missionary in far-off Africa and I hung on to that aspiration for a long time. I remember sending off requests to all kinds of religious orders featured in ads in the back of Catholic Digest magazine and then pouring over the information I received in response — imagining myself as a member of their order in one of their apostolates.

After graduation, I enrolled at Benedictine College as an “abbey student” — by then my ambitions had mostly transitioned to becoming a monk after several visits here at St. Benedict’s. After completing two years of undergraduate work, I entered the abbey on August 15, 1981 as a novice with three other men and received the name of Luke for the first time. Seven months or so into the novitiate my discernment led me to believe that I needed some time out in the world before making a lifetime commitment to monastic life. Little did I know then that God had other plans and it would be awhile before I returned.

I moved to Kansas City, started working full time and put myself through school. I switched majors from Spanish/English to Finance/Marketing and graduated from Rockhurst University. I was recruited by Hallmark Cards and began working in their Retail Store Development group, three years later they transferred me to Omaha, NE. Looking for a different challenge, some friends had suggested I check out a management trainee program for a global credit card processor with headquarters in Omaha.

Thanks to the serious work ethic instilled in me by my father, I quickly moved up the organization ladder earning a position as Vice President leading the company’s relationships with its portfolio of customers. Soon after, both MasterCard and Visa reached out to me for positions within their companies and I subsequently accepted a position with MasterCard International moving to Chicago. This was just the beginning of a trend in my life for the next several years. “Midwest boy makes good and is subsequently rewarded and becomes captivated with money and titles.” That’s all part of greatness, right? Looking back, I think the thrill of living in a new city, a big city, the excitement of adventure all contributed to my shift in priorities. Suddenly my motivation was focused on material things — sure I was still a good guy, maybe my values had shifted a little bit.

My hard work and efforts certainly paid off — soon I was off to Miami leading one of MasterCard’s business units in Latin America traveling extensively throughout Central and South America. Success continued to grow for me but so did my penchant for more stuff, and seemingly my faith life, the time I spent with Jesus Christ and my participation at Mass — all seemed to decrease in almost the same proportion. And you know what? I didn’t feel any better. In fact, my desires never seemed to subside — with each title, each salary increase, it didn’t take long until I was once again thinking how much better life might be if only I could get to the next title, the next salary jump. I truly felt like a dog chasing its tail.

After Miami — came New York. Same thing, different city. By now I was beginning to feel the emptiness. I was unhappy with my boss and I was looking for a change. I accepted a transfer to Dallas. After some time, I became settled — I was back in familiar territory, the Midwest. Once again, I became active in my parish — I was asked to help volunteer in the parish Emergency Assistance Center. It was here that the rumblings of my earlier dreams of priesthood began to return. Turmoil also accompanied the peace I was beginning to feel.

I lost my father to colon cancer in December, 2007 and as devastating as that was, it was really the impetus I needed to look at my life and ask myself some difficult questions. What was my legacy going to be? A luxury car, a beautiful home, an extensive wardrobe and endless travel — these all began to feel like an escape from reality. . .at least for me. MasterCard asked me to move to Atlanta and initially I pushed back but they came back a year later and politely pressed. I acquiesced. I wish I could tell you that by now I had wised up and learned my lesson. While I was on the right path, yet I was not completely “on board.”

I built a new house, bought a new SUV but I also searched for a parish where I could actively serve. I soon found one — in fact, as a volunteer I was required to spend an hour in Adoration each week. While it took more than two years, it was here that when I allowed myself to quiet down and listen, I heard God’s voice. His message was similar to the invitation I had received almost 30 years earlier — he was waiting for me. Unrest ensued — part of me was excited by the thought and the other part of me wondered how this could ever happen?

This “coming home” process has a story of its own but the faith instilled in me from my parents from childhood kicked in. I was reminded of two statements that had long been on my heart — one from my father: our greatness is not what we have, it’s what we give. The other was one of those proverbs I had heard in a motivating talk some years prior: great things await outside our comfort zone. Both were true and are true — they resonated with me as I wrestled with how to move forward. Do I take the jump or do I stay and try and shape things up?

Well, you all know the ending of this story — I stand before you here today. . . as a “reformed corporate type” who now professes a life of obedience, stability and conversatio morum following the rule of St. Benedict within a monastic community. A confrere reminded me recently that having “Father” in front of my name is a whole lot more valuable than Senior Vice President after my name!

Once I returned to St. Benedict’s Abbey — habited and once again with the religious name, Luke, God threw me yet another curve ball. Just back short of a year, I was diagnosed with colon cancer. You can imagine the shock I felt — shamefully, I admit that I had been sort of proud of the fact that I could leave what I left behind and enter into this commitment. Further proof that we never know what God is asking of us. With the help of my monastic brothers, we beat this thing and I am now seven years in remission. The road to greatness is not marked by perfection, but the ability to constantly overcome adversity and failure.

You are all enthusiastic young people, standing on the threshold of a new life as college students, no longer high school kids but moving into adulthood — and your parents are standing with you and maybe beside themselves with worry! But remember that greatness consists of a life with God who helps you to weather the storms of life. If we’re open to him, he will shape us into men and women after his own heart. Believe me, he used hammers and chisels on mine!

Great things are done by a series of small things put together. I am here today to encourage you and commit to each one of you that I believe in you and your efforts toward greatness. Please know of my own prayers for you in addition to the two monastic communities — the Mount and St. Benedict’s Abbey — who also pray for you. We all stand here on a great legacy of women and men educated in the Benedictine tradition who have done extraordinary things.

Go be great, be strong and courageous, do not be afraid, do not be discouraged, for the Lord will be with you wherever you go.

St. Gregory the Great. . .pray for us

St. Benedict and St. Scholastica . . .pray for us