He Found God, and His Priesthood, at College 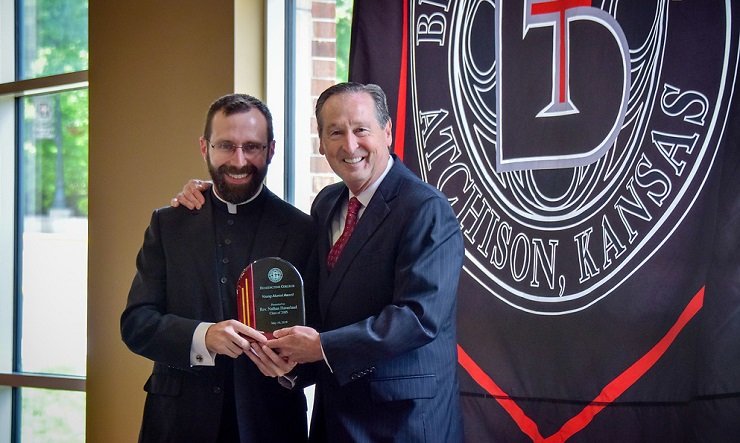 For me, to say my life was changed by Benedictine College would be an understatement.

Benedictine didn’t just change my life, but it helped to define it.

My path to Benedictine would begin unknowingly at an early age when I developed this deep desire to be an astronaut.

I had come across a book about the universe and from that moment I was hooked. And as I have noticed throughout my life, when I am determined to do something I go all in. I had every astronomy book I could find. I stuck hundreds of glow in the dark stars on my ceiling. I had planets hanging from the ceiling. And one day I even had the audacity to write NASA to tell them that I was going to be an astronaut when I grew up. To my great surprise they even wrote back. They told me all the requirements needed to be an astronaut and those became my driving force.

The end of High School approached and I wanted to study Physics and Astronomy. Since I couldn’t decide between them, I decided I wanted to study them both. Again, I was all in. A simple search of schools near home left me with two options, KU and place I had never heard of called Benedictine College. I did a campus visit to both and from the moment I walked onto this campus I knew something was different about this place. It was peaceful. It was beautiful. And people seemed to have a joy that I had never seen before.

I wasn’t with any type of faith and I didn’t know a single person going to Benedictine, but I knew it was for me. Who knew that a simple decision of where to go to college could forever change the course of your life.

One of my first classes I had was an Introduction to Theology class and for the first time in my life I had a place to grow in my knowledge of the Faith. It’s hard to describe what it is like to hear about the Faith for the first time but all I knew was that I was soaking it all in. I barely knew what the Bible was and didn’t know the Our Father, but eventually something happened in my heart. I recognized the great beauty of the Christian faith, and was sad I wasn’t a part of it. And so on one fateful day, I saw a sign for RCIA and nervously went.

Again, I went all in. I soaked it up like a dry sponge to water. I can even remember reading the whole Catechism of the Catholic Church over my Christmas break. Only later would I realize who unusual that is.

On a beautiful Divine Mercy Sunday in 2004 I received the sacraments of baptism, confirmation and the Eucharist in a packed St. Benedict’s church. I couldn’t have been more nervous. I hated public speaking and I was so nervous that my knees barely worked. But I was filled with an indescribable joy. Adding to that joy was the fact that my mother, who had been raised Catholic, returned back to the Church that day after being away for approximately 40 years.

A year later I would graduate with my degrees in Physics and Astronomy. The desire to be an astronaut was no longer there as I realized that I didn’t like heights or flying. I went off from our small college to the second largest in the country, the University of Michigan, to study Nuclear Engineering and Radiological Sciences.

While I was there I began to ask a different question of myself. The question was no longer what I wanted to do with my life, but what is it that God wants me to do. He obviously had made me with these specific gifts and talents in this specific place and time, and so I began to ask in prayer what might He have in mind for me. I quickly realized in those moments that once you start asking that question, God takes the lead. After completing my studies, I left it all behind for the seminary and six years later I was ordained a priest, yet again nervous in front of a whole church full of people but joyfully praying like Mary, Fiat. Let it be.

The very same day I was ordained, I celebrated my very first Mass where it all began, here at St. Benedict’s. Most priests wait until the next day to celebrate their first Mass, but I didn’t see a need to wait. I was all in and ready to celebrate Mass.

I can’t help but share one of my favorite and most horrifying moments of that day.

Right after the Mass I was driving up the hill here and saw a friend walking on the sidewalk. Thinking I was funny, I honked to scare him. And thinking myself even funnier, I keep honking. To my great horror, as I was doing that for an annoyingly significant amount of time I looked over into the cafe’ only to see it filled with people staring at me. It was a wedding reception. And if that wasn’t awful enough, the bride and groom were alone on the dance floor. It was clearly their first dance and they too were staring at me. And so I did what all men just ordained would do, I sped out of there as quickly as the Holy Spirit would let me. I guess the moral of the story is look before you honk.

I’ve had the privilege of being a priest now for six years, and it is has brought me greater joy and peace than I ever could have imagined. But nothing about the priesthood is easy, but then again no vocation and no life is easy. Being a teacher is hard, but so is being a doctor, a scientist, a CEO and a parent. Every life is going to have its struggles, but what makes the difference is how you choose to deal with them. A life lived well is not one without struggles, it is one that knows how to handle the struggles.

In life we will each have different things that help shape who we are. For me, the reason I am the man I am today is firstly because I have been blessed to have crossed paths with some incredible people in my lives. From teachers and peers, to relatives and strangers, I have been inspired to pursue greatness because I first saw it being lived out in others. I have realized that one of the best things we can give someone is the encouragement and inspiration to achieve something greater.

I am also the man I am today because of the great legacy left behind by the saints, one of them being St. Thérèse of Lisieux. Until her I had thought the path to holiness required you to die for the faith, start a religious order or be some kind of prolific author. But Thérèse would teach me that greatness can come through the ordinary. From something as simple as sweeping all the way to tremendous physical suffering and spiritual suffering, she reminds us that each moment, no matter what it is, has the potential to be something truly great if we let it.

Lastly, the greatest thing that has impacted my life is the Eucharist. The more important the Eucharist became in my life, the more courage I had to pursue greater things. It truly is our greatest treasure.

I’ve spoken too long already, but let me be the first to congratulate you and welcome you to that group now called alumni. We are Benedictine students only for a short time, but we are alumni for life. You now join a group of thousands of people scattered all throughout the world doing all kinds of extraordinary things  and all influenced by this amazing place.

I don’t know what the future has in store for you or how your story will unfold, but today we do as we say in the Fight Song, cheer you on your way. May you soar unto glory, and always be faithful to the story.