From Stranger to Friend: Benedictine Students Celebrate the Canonization of John Henry Newman 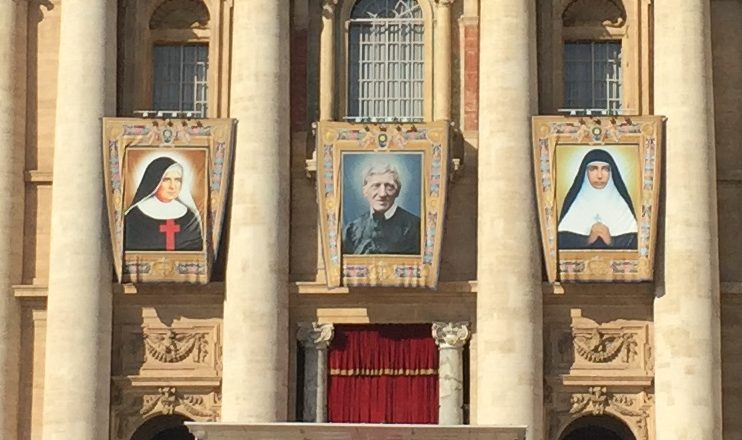 Before the sun came up over Saint Peter’s Square, Benedictine students participating in the Florence study abroad program took their place in the queue to be up close for the canonization of Saint John Henry Newman. The famous 19th century convert from Anglicanism was canonized on October 13 along with four holy women from the countries of Italy, Switzerland, India, and Brazil. After several weeks of studying Newman’s sermons and his book, The Idea of a University, we traveled from our campus in Florence to celebrate Newman’s enrollment among the saints. We cheered at the conclusion of the Rite of Canonization as the Holy Father replied to the request for the canonization of the new saints with one simple Latin word, “Decernimus”, which means, “We so decree.” Newman was and is a saint!

For the majority of the students who attended the canonization, Newman’s life and thought was relatively unknown before coming to Florence. But having encountered him in his role as pastor and educator, they found a voice that speaks to their hearts in a uniquely powerful way. Newman is a saint for college students, as he spent a great deal of the first part of his life educating, mentoring, and preaching to Oxford University students from the pulpit at St. Mary the Virgin Church. His sermons spoke to the needs of the young men that gathered to hear the great and controversial leader of the Oxford Movement, and they continue to speak to students today.

The students responded to the bold, challenging, and inspiring vision of the Christian life they heard from Newman’s sermons. Newman calls them to go beyond a comfortable, worldly existence, and to make the cross of Christ the measure and explanation of all things. He encourages them not to put their hope or trust in the world, but to cling to the cross of Christ and interpret all of reality through it. Of the world, he said, “Let us not trust it; let us not give our hearts to it; let us not begin with it.” Rather, he insisted, “Let us begin with faith; let us begin with Christ; let us begin with His Cross and the humiliation to which it leads. Let us first be drawn to Him who is lifted up, that so He may, with Himself, freely give us all things.” (“The Cross of Christ the Measure of the World”)

He challenged the students to have their hearts and minds transformed through reverent worship and devotion. To be happy in heaven, he insisted, a person must become holy in this life. As he put it, “Heaven is not heaven, is not a place of happiness except to the holy,” and “Heaven would be hell to an irreligious man.” Moreover, “even supposing a man of unholy life were suffered to enter heaven, he would not be happy there; so that it would be no mercy to permit him to enter.” (“Holiness, Necessary for Future Blessedness”)

He taught the students that faith and reason, science and devotion must be reintegrated through a Catholic university education. The division, so often taken for granted today, between the life of faith and the life of the mind, was to Newman a result of the Fall and Original Sin. As he put it, “I wish the same spots and the same individuals to be at once oracles of philosophy and shrines of devotion. […] I want the same roof to contain both the intellectual and moral discipline.” The unique goal of a Catholic university, as distinguished from its secular counterparts, is, according to Saint Newman, to reunite with the help of Divine grace, what we have put asunder. As he put it, “Devotion is not a sort of finish given to the sciences; nor is science a sort of feather in the cap, if I may so express myself, an ornament and set-off to devotion. I want the intellectual layman to be religious, and the devout ecclesiastic to be intellectual.” (“Intellect, the Instrument of Religious Training)

But ultimately, as all the saints do in their own way, Newman taught the students to love Christ above all else, to trust in Divine Providence, and to courageously follow God’s will. During the distribution of Holy Communion at the canonization mass, the choir sang a Latin translation of Newman’s famous poem turned hymn, “Lead Kindly Light.” But his poem, “Consolation,” beautifully captures the joy and solace Newman and the all the saints know now in heaven:

Or, startled at some sudden blow, / If fretful thoughts I feel, / “Fear not, it is but I!” shall flow, / As balm my wound to heal.

Nor will I quit Thy way, though foes / Some onward pass defend; / From each rough voice the watchword goes, / “Be not afraid! … a friend!”

And oh! when judgment’s trumpet clear / Awakes me from the grave, / Still in its echo may I hear, / “‘Tis Christ; He comes to save.”

It is this message and witness from Newman, a message and witness of hope in Christ who is our savior and friend, that drew Benedictine students to Rome to offer praise and thanksgiving to God for the gift of His holy servant, and their newest friend among the blessed in heaven, Saint John Henry Newman.