Hiding the Faith: From the Ark and Dove to Apollo 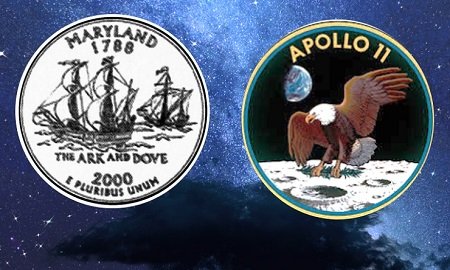 Fifty years ago, Apollo 11 was sent by religious men onto the moon where, with 20% of the world watching, they hid their faith.

Their deferential pusillanimity is a not-so-grand American tradition that may have been started, and has certainly been reinforced, by Catholics.

When Apollo 11 landed on the moon, marking the outer limits of scientific achievement to that day, Buzz Aldrin, a religious man, said:

I’d like to take this opportunity to ask every person listening in, whoever and wherever they may be, to pause for a moment and contemplate the events of the past few hours and to give thanks in his or her own way.

He was a devout Presbyterian, but didn’t mention the name of his Lord and Savior. He didn’t even say the “G” word. NASA had strictly ordered those aboard the spaceship not to upset the atheists.

Madalyn Murray O’Hair was suing NASA, having been triggered by Apollo 8 astronauts daring to read Genesis while becoming the first men to orbit the earth.

On Dec. 24, 1968, as the sun rose over the earth, astronaut William Anders had read, “And God said Let there be light: and there was light.” James Lovell had continued, “And God called the light Day and the darkness he called Night.” Frank Borman covered the separation of the earth and waters, and added “Merry Christmas” for good measure.

It was the most-watched television broadcast ever at the time, and people loved it. But Madalyn Murray O’Hair didn’t, so in deference to her (and the statistically small group she represented) astronauts thereafter were to keep their faith to themselves.

The following July, the Apollo 11 astronauts left a plaque on the moon. President Nixon had insisted that the plaque mention God. NASA found a sneaky way to comply with the demands of their boss and the demands of O’Hair, by writing:

Here men from the planet Earth first set foot upon the moon, July 1969 A.D. We came in peace for all mankind.

God was there in the “A.D.,” they argued; Anno Domini, the Year of Our Lord.

When Nixon spoke with the astronauts in space, he said, “Hello, Neil and Buzz. I’m talking to you by telephone from the Oval Room at the White House. And this certainly has to be the most historic telephone call ever made. …  Because of what you have done, the heavens have become a part of man’s world. … For one priceless moment in the whole history of man, all the people on this Earth are truly one: one in their pride in what you have done, and one in our prayers that you will return safely to Earth.”

It was a great little message, with prayers at the end, but “the heavens have become a part of man’s world,” in the context of this mission may have had a different effect from what he intended.

It may, in fact, have sounded simply like a nicer way of saying what Nikita Khrushchev had said about Yuri Gagarin, the first human being in space: “Gagarin flew into space, but didn’t see any god there.”

The night before their return to earth, the astronauts gained a little more courage:

“Personally, in reflecting on the events of the past several days, a verse from Psalms comes to mind,” said Buzz. “When I consider the heavens, the work of thy fingers, the moon and the stars, which thou hast ordained; What is man that thou art mindful of him?”

Neil Armstrong thanked all those who made the mission possible, and signed off: “God bless you. Good night from Apollo 11.”

Two sailing ships, the Ark and the Dove, landed on American soil 335 years before the Eagle landed on the moon. They had been sent from the Isle of Wight by Lord Baltimore, Cecil Calvert, a Catholic, with a Catholic mission: to create a Catholic American colony.

But, like NASA, Calvert’s final act was to give gave the Catholics on board strict orders: They were to show religious toleration above all.

Like Buzz Aldrin, who received communion, given him by his Presbyterian pastor, privately on the moon, the Catholics on board said Mass in secret on the boat during the long voyage, so as not to upset the largely Protestant crew, as my Church history professor in Washington, D.C., told it.

The people aboard the Ark and the Dove were religious also. But more than anything else, they were worried about offending others.

One of their first orders of business in America was to establish the Maryland Toleration Act in 1649, vowing to accept all trinitarian religions at a time when other colonists were interested in making fiefdoms for their Puritan sects.

In the years that followed the Toleration Act, the Puritans took over in Maryland and prohibited Catholicism. Some of the very crew members whose feelings had been spared on the voyage now didn’t hesitate to assert their faith claims.

The American religious principle, that believers should hide their faith for the sake of those who don’t share it didn’t work in the New World, and it hasn’t worked in the scientific age.

It signals weakness, not strength, and is taken advantage of by people who want to end religion, not tolerate it.

Religious people will continue to lose major battles as long as we continue to believe that hiding our lanterns is the only way to keep them lit.

The opposite is the case. That’s the way you snuff a lantern.

This appeared at the National Catholic Register.