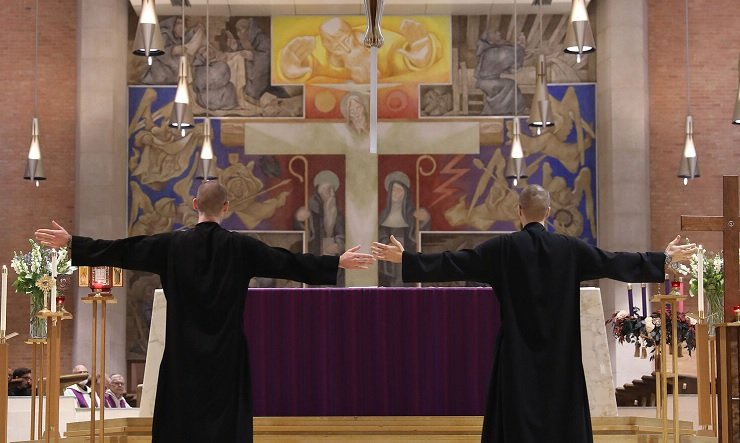 A podcast interview introduced the two new monks who professed their first vows to St. Benedict’s Abbey on the campus of Benedictine College in Atchison, Kansas, this month.

After his profession, Brother Maximilian Anderson has been assigned to work as Assistant Vocations Director and will be working with the novices during manual labor.

Brother Angelus Atkinson has been assigned to work as assistant retreat master with Father Jay Kythe. He will also be taking classes at Benedictine College and continuing his study of Hebrew with Benedictine Sister Irene Nowell at Mount St. Scholastica in Atchison.

Brother Maximilian said making his vows was the culmination of a long journey with a lot of steps on the way that didn’t make sense at the time.

“I loved going to school at Benedictine College,” he said. “This is the place I really started to be alive in my faith. I encountered people who had something I wanted, and what they had was a real living relationship with the God who had created me, with Jesus Christ. That was something I never bumped into before. I started to pray more and go to daily Mass, and grew in the desire to want to share that. “

He had come to Benedictine College as Marty Anderson from Gillette, Wyo. He graduated with a degree in International Business and Spanish, then spent two years as a FOCUS missionary, first at Tulane University, then at the University of Texas-Tyler.

Brother Maximilian said it was during his service as a FOCUS Missionary after graduation that his desire for a vocation grew.

“Within that time was the real flowering and budding forth of my desire for celibacy, and my desire for a vocation to virginity. For me at that time I was blown away by my heart started desiring to belong to God, and God alone,” he said.

He attended retreats at the Abbey and another religious house in successive weeks, and had totally different experiences. “Even though the other one had more people and my friends were with me, the Abbey felt like home.”

Brother Angelus was planning a cross-country motorcycle trip when someone suggested he look at St. Benedict’s Abbey. He said he did a “half-country” motorcycle trip instead.

Brother Angelus came to the Abbey as Charles Atkinson from Washington, D.C., where his father teaches at the John Paul II Institute for Studies on Marriage and the Family. After starting out studying Jazz Piano at Northern Florida University, Atkinson had graduated with a degree in Literature and a minor in Latin from Ave Maria University, and worked as a teacher of Latin at a Classical Arts High School in Washington. He is an avid reader who enjoys playing the banjo and hiking.

He said the moment of profession reminded him of a newly released. Leonard Cohen song. “At the end he says, ‘I have nothing to teach except the goal exceeds the reach.’”

“When you profess vows to Christ through the Abbot, these are impossible vows to complete on your own,” he said. “The goal that my heart desires is union with God and that exceeds my reach, my capacities.”

At the same time, the experience was freeing, he said.

“The first time I read the Rule through was in 2013 in a monastery in Italy,” he said. “My impression, I recall distinctly, was perceiving in my heart this great sense of freedom when I read his words”

Even though the Rule of St. Benedict focuses on obedience, it is obedience in freedom, he said, in which one freely gives oneself to God.

Asked what he would tell someone wanting to be a monk, Brother Maximilian said, “It’s really hard to answer in the abstract. It’s actually impossible. For me, in my own life, God came and spoke to me in concrete, lived circumstances.”

If someone asked him what to do about a vocation, “I would say get in contact with someone who is a vocations director, or contact Brother Leven here at the Abbey. Ask to come on a retreat and experience it.”