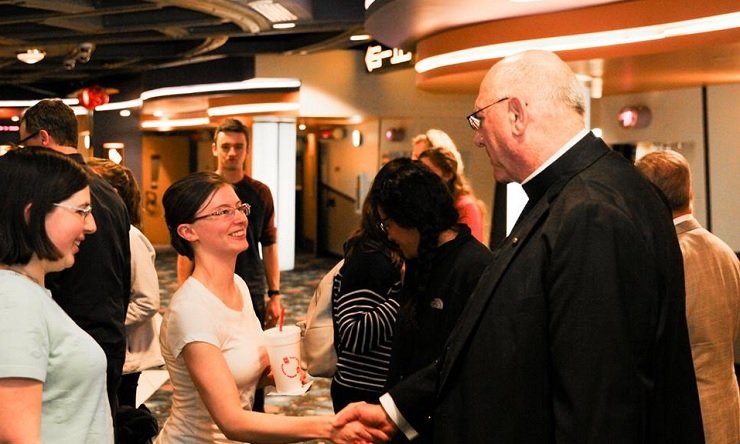 People working on the movie had to keep it secret. Actors were told they could damage their careers by participating. Music rights were denied. The Motion Picture Association of America gave it an “R” rating, despite the complete absence of profanity, gratuitous violence, and sexually explicit material. Even the powerhouse Christian broadcasting network K-Love initially refused to promote the movie, apparently fearing the “political” controversy.

This was the path of Unplanned, a new movie that tells the true story of Abby Johnson, a clinic director for Planned Parenthood who had a life-changing conversion to the pro-life cause.

UPDATE: Unplanned surprised the film industry, coming in at Number 4 in box office returns for its opening weekend, earning $6.4 million — twice what it expected, despite the effort of pro-abortion groups to deter viewers.

The movie found a strong supporter in Benedictine College in Atchison, Kansas. 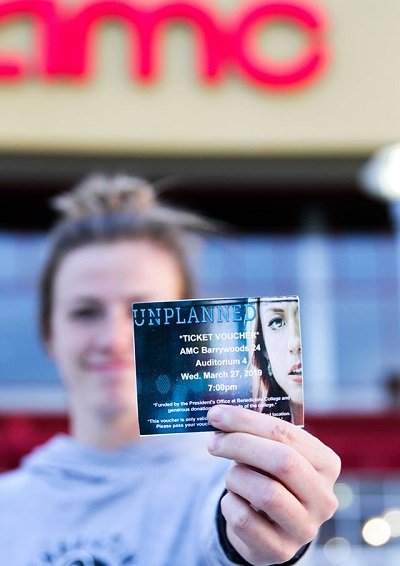 The college and its student pro-life group, Ravens Respect Life, were unwavering. Benedictine stepped up and answered the call from the Archdiocese of Kansas City in Kansas to promote the movie. Along with two donors, Dr. Paul Camarata and Paul Danaher, the college rented an entire theater in a nearby AMC movie complex and offered the tickets to its student body, faculty and staff.

“We at Benedictine College take the pro-life issue very seriously and we support life from conception to natural death,” said Benedictine College President Stephen D. Minnis. “We are excited about this new movie and its potential to transform the culture in America. We wanted our students to get the first look at it and be able to promote it to their friends and families.”

Tickets to the advance showing on March 27 were gone in a flash and a packed house included Minnis and Archbishop Joseph Naumann, who is chairman of the U.S. bishops’ Committee on Pro-Life Activities.

He addressed the audience after the screening.

“I think there is a lot to digest from this movie,” said the Archbishop. “There are scenes that I find very difficult to watch, but it’s a movie about mercy and redemption. I think it is a movie that has the power to change hearts and lives. I pray that you will encourage friends and others to see this movie, especially in this first weekend of showings, so that its impact can be expanded as much as possible.”

Shelley Laures, a senior nursing student at Benedictine, was surprised at how real the movie was and how people can convince themselves they are doing the right thing even in the midst of obviously horrifying circumstances.

“I’m in nursing school right now and it made me sick to my stomach watching all those nurses use the gifts that they’ve developed to contribute to such a horrible thing,” she said. “It just made me think that if there is something like this that they can do, then there is something I can do to counter that. It definitely encouraged me in my profession.”

Danielle Boulanger, a Benedictine sophomore and president of Ravens Respect Life, has been very active within the pro-life movement for years and helped organize the movie preview. She was excited to learn about the impact praying at an abortion clinic actually has in decreasing abortions and thinks the movie will inspire people to stand up and take action.

“What we’re doing in our movement really does have a big impact,” she said. “Even just standing outside the clinic and praying has an impact, and that reassuring feeling we get from the movie is overwhelming and is going to be a big encouragement to our students to stay active in the movement and go even further and get more involved.”

“I think this movie really makes you uncomfortable on the inside, but it makes you want to go out,” Boulanger added. “Whether people are involved, not involved, identify themselves as pro-life, or even if they don’t, I think the movie will get them to move and take action.”

Jonah Hintgen, a junior at Benedictine College, gave a male perspective on what he had just seen.

“What immediately impacted me was the love of the husband,” he said. “How he completely disagreed with her, but at the end of the day, he said ‘you know where I stand and I’m going to love you through it and I’ll wait for you to get to the other side.’”

Hintgen said he had been active in the pro-life movement in high school, but not as much since he had been at college.

“I would say this has been a wonderful re-motivation,” he said. “It kind of grows cold and you don’t see the need as much when you’re in an environment that supports the pro-life movement. But now, seeing this, I can’t wait to go out and do something!”

This piece, written by Steve Johnson, appeared at the website of Benedictine College.