New Raven Priest Sang for the Pope as a Student 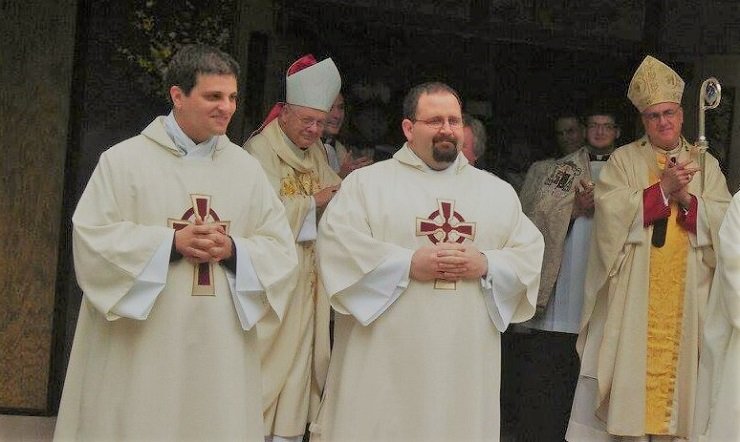 Another Raven will be ordained a priest on Saturday, May 25.

Archbishop Joseph F. Naumann will ordain him with five other men on May 25 at the Church of the Ascension in Overland Park, Kansas.

The Leaven newspaper reported on his story.

Ostrowski was home-schooled until he was in the fourth grade, and then attended a small Catholic school where he first felt the call to the priesthood.

“I was sitting on the left side at Most Pure Heart of Mary Church,” he told The Leaven, “and I thought, ‘I think I’d like to do what [the priest] is doing.’ And I filed it away.”

He received a “nuts-and-bolts, foundational-Catholicism” kind of education from a school started by the Latin Mass community.

Ostrowski also had a full spiritual life at home.

In 2002, he became a freshman at Benedictine.

Reports the paper, “While at Benedictine, he studied, continued to mature in his faith and seriously dated — even becoming engaged to be married. After a while, however, that path didn’t seem to be the right one for him.”

He became a missionary with the Fellowship of Catholic University Students — FOCUS — after graduation.  FOCUS had been founded only eight years earlier at Benedictine College. FOCUS missionaries provide Catholic formation on university campuses, evangelizing and forming Bible studies.

Ostrowski was sent as a missionary for two years to the University of Missouri-Kansas City. The team of missionaries he was a part of formed strong bonds with each other — and with God.

“A high percentage of [men] from that little prayer group went on to [the] seminary,” said Ostrowski told The Leaven. “You gain courage from talking to each other, or at least the confidence to try. You don’t go to a mountain top to discern.”

Ostrowski applied to the Archdiocesan seminary and entered Kenrick- Glennon Seminary in St. Louis in 2008.

He was ordained a deacon on May 18, 2013, and served at two parishes in addition to the St. Lawrence Catholic Campus Center at the University of Kansas as he further discerned before entering his last year of theological studies.

The Leaven’s article includes “Personally speaking” section of fun facts about Ostrowski, including this:

“My most notable encounter with the famous/infamous: I sang with the Benedictine choir for Pope John Paul II, and I met Kansas City Royals color commentator Rex Hudler while filling gas.”