Our Lady of the Gospels 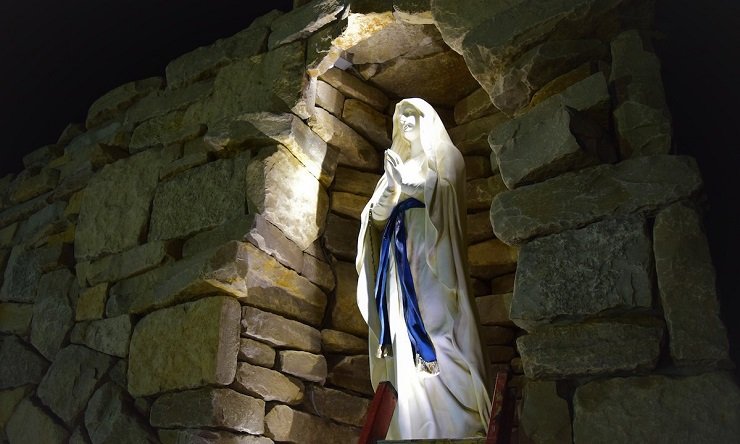 Today the Church commemorates Our Lady of the Rosary, one week into the month of October, dedicated to the Rosary. To honor her, we are diving deeper into the mysteries that are quoted in the Gospel and in the Hail Mary — thereby reflecting on the Blessed Mother’s role through the Gospels.

The first mystery we will reflect upon is the Annunciation from St. Gabriel, the archangel.

Mary stands here at the turn of salvation history, embodying the faithful of Israel and making way for the Messiah. In fact, the angel’s greeting “Hail” (χαῖρε) is the exact same as that given to Daughter Zion in the Greek version of Zephaniah 3:14. This is significant because “Daughter Zion” in the prophets generally refers to the eschatological people of God — that is, the people of God as God has called them to be; Mary, then, embodies this glorious radiance which God has always destined for his people. And the Zephaniah passage continues: “The King is in her midst” (Zephaniah 3:15); indeed, in the Annunciation the King is in her midst, in the womb of the Blessed Virgin (see Joseph Cardinal Ratzinger’s book, Daughter Zion, pages 42-3).

Moreover, the angel doesn’t address Mary by name, but rather astonishingly as:

This breathtaking greeting offers a glimpse of the grandeur of the Incarnation, as seen from heaven’s vantage point.

Further, the phrase “the Lord is with you,” used by the angel with reference to Mary, occurs throughout the Bible in order to indicate God’s presence and support for accomplishing his mission, as for example with Moses (Exodus 3:12), Joshua (Joshua 1:5, 9), Gideon (Judges 6:12), and Jeremiah (Jeremiah 1:8). This means that Mary, too, stands on the cusp of some great moment in salvation history. And Mary responds with unflinching faith:

In a sense, God’s plan hinges on the faith and obedience of the Virgin Mary; and for that, all generations call her “blessed” (Luke 1:42).

Sometimes much is made of the distinction between Jesus’ physical family and his spiritual family—the latter marked by those who “hear the word of God and do it” (Luke 8:21; 11:27-28). But a distinction need not entail a separation; and in fact, St. Luke portrays Mary as the one who quintessentially “hears the word of God and does it” (see Luke 1:38-39; 2:19, 51); in other words, she goes before us as model disciple and embodiment of the Church; and in Luke’s sequel (Acts of the Apostles), she is there persevering to the end with the disciples (Acts 1:14).

May we follow Mary’s path of saying “yes” to the Lord from beginning to end:

After the Annunciation, Mary arises “with haste” (Luke 1:39) to visit Elizabeth, who greets her with familiar words:

“Blessed are you among women, and blessed is the fruit of your womb.” (Luke 1:42)

St. Luke then depicts Mary’s journey in a manner reminiscent of David’s bringing the Ark of the Covenant to Jerusalem in 2 Samuel 6. Such a parallel would be enormously significant, since the Ark was the holiest object in all of Israel—made holy because it bore the very presence of God; overlaid with gold (Ezekiel 25:11), it held the Ten Commandments, a jar that held the manna, and Aaron’s high priestly rod (Hebrews 9:4). Likewise, Mary bears Jesus who is the Word of God Incarnate, the bread of life, and eternal high priest.

Moreover, the following parallels in both journeys emerge:

It’s hard to overstate what these parallels would mean: no Jew in the ancient world could have proclaimed his love for God and yet been indifferent to the Ark.

And just in case we missed it, St. Luke uses a very rare word in Luke 1:42 to describe how Elizabeth “exclaimed” (anaphoneo) such praises before Mary.

This Greek word occurs only here in the New Testament, and only five times in the entire Greek Old Testament — every single time with reference to Levites praising the Ark of the Covenant (see 1 Chronicles 15:28; 16:4, 5, 42; 2 Chronicles 5:13; also see Scott Hahn’s book, Kingdom of God as Liturgical Empire, page 65). The reference, then, is unmistakable: here we have once again a Levite — in Elizabeth (see Luke 1:5) — praising the Ark of the New Covenant.

Mary is revered for what God has done in and through her; but she is also called “blessed” for her great faith:

“Blessed is she who believed that there would be a fulfillment of what was spoken to her from the Lord” (Luke 1:45).