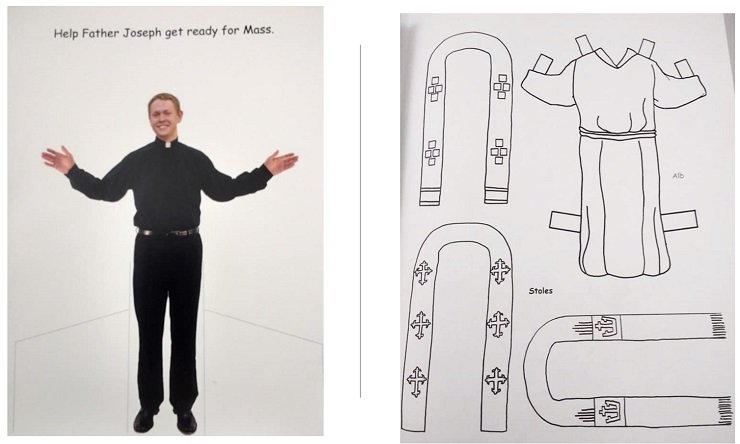 So he was surprised to see paper dolls of himself as a new priest, complete with vestments to cut out and try on, after his ordination.

“I had no idea that those dolls were being made,” said the new priest-alumnus of Benedictine College in Atchison, Kansas, ordained for the Archdiocese of Saint Paul and Minneapolis last May.

He did know the purpose behind the dolls, however. “It is part of an international faith formation curriculum called Family Formation, based out of my home parish in Ham Lake, Minn., which focuses on helping parents to catechize their children.”

Because of that parish, Father Joseph already thought he might become a priest before leaving home for college. But something changed at the school.

“I first felt called to the priesthood while in high school, but I did not truly listen to it until I was a freshman at Benedictine College,” he said. “While I was there and with the help of my home pastor in Minnesota, I realized that God was calling me.”

Joseph and his four brothers, sons of Elaine and Doug Gifford, grew up in the shadow of the Church of St. Peter in Ham Lake, Mo., active in Family Formation, Vacation Bible School, and serving at altar there even before the family moved right next door in the year 2000.

He didn’t leave college to pursue the priesthood. “I also realized that God was calling me to stay at Benedictine and finish my Bachelor’s Degree there, before I entered the seminary,” he said. He graduated in 2014.

“Benedictine College nurtured my vocation through great academic formation, through working with campus ministry, and participating in many of the masses on campus,” said Father Joseph.

Father Joseph was a philosophy and music major at the school. As a senior, he combined both loves in a 35-page philosophy thesis  for Discovery Day. Beauty was his topic, and he had to defend the paper before a panel of philosophers and theologians at the college, including Dr. Jamie Spiering, who was the project’s academic adviser, Dr. Edward Macierowski and Dr. Matthew Ramage.

Gifford argued that beauty is objective in itself but experienced subjectively.

Ironically, Gifford was involved in two unusual expressions of beauty at college. For one, he kayaked in the Missouri River for an hour for a photographer who wanted an unusual shot of the implosion of Atchison’s old Amelia Earhart Bridge. But more importantly, “A fun fact about my experience at Benedictine was that I was trained as an opera singer at Benedictine,” he said.

He looks forward to life as a priest.

“My mission statement as a priest,” he said, “would simply be that I just want to be a holy priest, offering sacrifice, teaching the Word of God, and leading out of service, all for the glorification of God and the sanctification of man.”