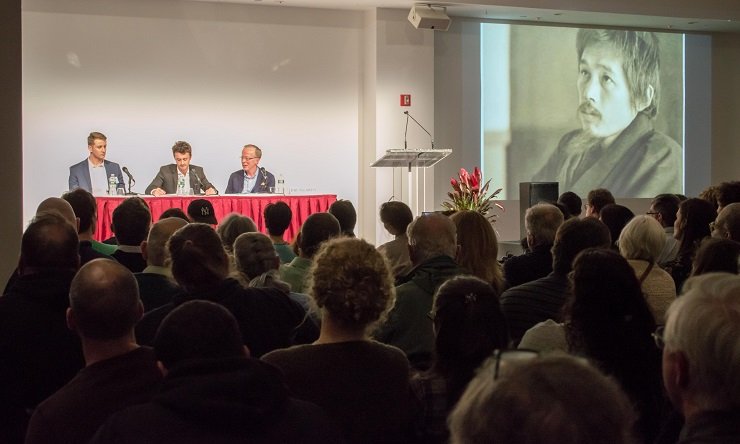 Pietro Mariani from Rochester, Minn., found himself in New York presenting on a modern-day Japanese layman being hailed as a saint.

He is a junior Gregorian Fellow at Benedictine College in Atchison, Kansas, who studies Finance, International Business and Political Science.

“I have been working on a research project which all came from the book A Song for Nagasaki, by Paul Glynn,” said Mariani.

The book tells the story of Dr. Takashi Nagai (1908-1951), a radiologist and convert to Christianity who survived the atomic bomb which fell on Nagasaki.

At the New York Encounter event of the Communion and Liberation movement in February, Mariani presented on Nagai.

Nagai earned him the nickname “saint of Urakami” by his life of prayer and service to bombing victims. Urakami is the Catholic center of Nagasaki, near ground zero of the atomic bomb. Nagai has been declared a Servant of God, the first step towards Catholic sainthood.

“The project was part of The Kindness of Science exhibit,” Mariani said, “Main contributors to the exhibit came from professors of Colombia University, University of Kansas, the Mayo Clinic, and others.”

Mariani contributed to a presentation on Nagai’s history and impact.

“It looked at how his past Shinto life, and various events in his life that made him the hero he came to be.”

Nagai was converted by an experience with his dying mother that transformed his understanding of he soul.  He stayed with a Christian family and experienced the traditions of the Japanese Catholics evangelized in the 17th century by the Jesuits. These Christians had kept their faith alive without priests, and one of them, Midori, became Nagai’s mentor.

Nagai was able to see Japan’s wars, and even the destruction caused by the Atomic Bombs in a unique light, knowing that God knows how to bring good out of every evil.

“It was a great opportunity to bring various classmates from Benedictine College to these places around the world, and share with thousands of individuals the life of Takashi and honor it together.”