Abbey Vespers at the Ballpark.

The Salve Regina at game’s end.

About 3,000 people gathered at the T-Bone Ballpark in Kansas City, Kansas, July 5 and watched Archbishop Naumann’s prayer get answered.

Archbishop Naumann led opening prayers before the game, and added with a smile: “We pray that Kansas City, Kansas, will win.” 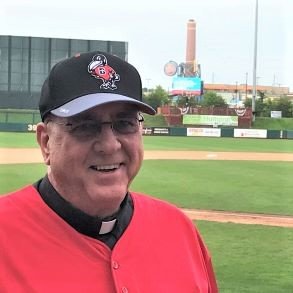 Benedictine College in Atchison, Kansas, is in the archdiocese of Kansas City-Kansas, and several priests associated with the college helped deliver a 14-12 win to the team in red. Archbishop Naumann led the team wearing a Benedictine College baseball cap.

A highlight of the event is the tailgate before the game. For the past several years, the monks of St. Benedict’s Abbey on the Benedictine College campus have attended the tailgate, but not at the cost of their prayer schedule. The Abbey’s posted schedule lists “Vespers at the Ballpark” for the day of the game each year.

Members of the Benedictine College community and the Atchison Serra Club gathered in a circle in the parking lot to sing and chant the evening prayer with the monks before heading into the game.

“The game started out with strong defense from both teams, and at the end of the first inning the score was tied 1-1. Strong hitting from the KCK priests helped them slowly build a lead, and heading into the fifth inning they were ahead 9-6,” reported Ellie Melero in The Leaven.

“The fifth inning was Kansas’ best. With the help of power hitters like Father Dan Morris and speedy seminarian pinch runners, KCK was able to score five runs against Missouri’s three, bringing the score to 14-9.”

Benedictine College chaplain Father Simon Baker, OSB, was a leader in the game in both defense and offense. He told Melero that raising the profile of vocations was more important than the game, though.

“The only thing that divides us really is the state line,” said Father Simon. “So, to have the two dioceses be working together for the sake of building up vocations — it’s just a beautiful experience.”

The game is sponsored by the Catholic Radio Network, which provides kids with “baseball cards” featuring the priests playing on the two teams.

“Kids get to see the other side of the priests,” volunteer Carolyn O’Laughlin told Melero. “This is just a little more lighthearted and fun time.”