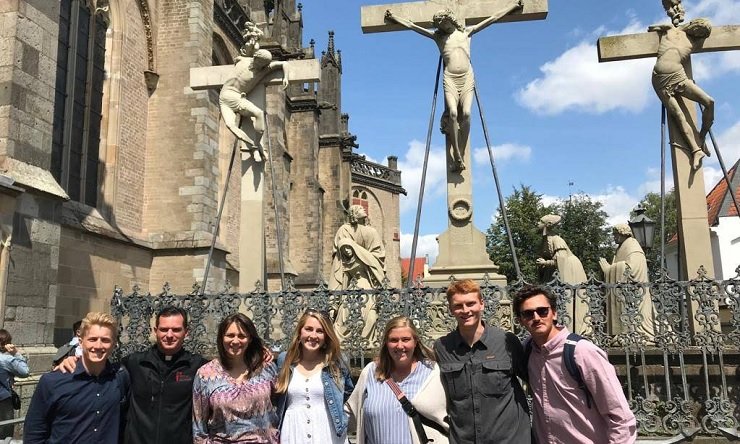 Several Gregorian Fellows at Benedictine College spent a month this summer at the Catholic Worldview Fellowship, a program located in Germany and Italy that combines courses, workshops, personal coaching, leadership training, and cultural immersion to help students evangelize culture throughout the world.

Nicole Buchman of Stillwater, Minn., a Gregorian Fellow and Music and Theology Major who plans to graduate in 2021, was transformed by the courses.

“I did not expect the curriculum to be as challenging and enriching as it was,” she said. “I am a new Catholic because of it.”

The students took courses with people from all over the world. Lucas Hoffman from Ventura, Calif., is a Physics Major and Gregorian Fellow who plans to graduate in 2021. He said it was fascinating to learn “How similar different peoples are.”

“Simple conversations on the way to class in the morning and interactions with local people in the afternoon showed me that I didn’t need to speak a certain language to relate to a certain person,” he said. “It’s very surprising to see how much we all have in common when we don’t let our differences define us.

Buchman said a high point was a night when the students evangelized on the streets of Cologne, Germany, inviting people into the Cathedral for adoration.

“That night I encountered two homeless men who only spoke broken Italian and were extremely crippled,” she said. “We went and got them food and water and then they came into the cathedral with me.”

“Despite their extreme physical disabilities, they knelt in front of the Blessed Sacrament and we wept and prayed together,” she added. “Kneeling with them in front of our Lord was a reminder to me how we are all children of God no matter how internally, spiritually, or physically downtrodden we are.”

Pierce Stavens from Fort Worth, Texas, is a Gregorian Fellow at Benedictine College who majors in International Business & Management.

“The family of Catholic Worldview Fellowship is one that cannot be described with words and only those who attend, will ever truly understand,” he said. “It is not until the drive to the airport after saying your goodbyes where you realize just how much of the experience you took for granted.”