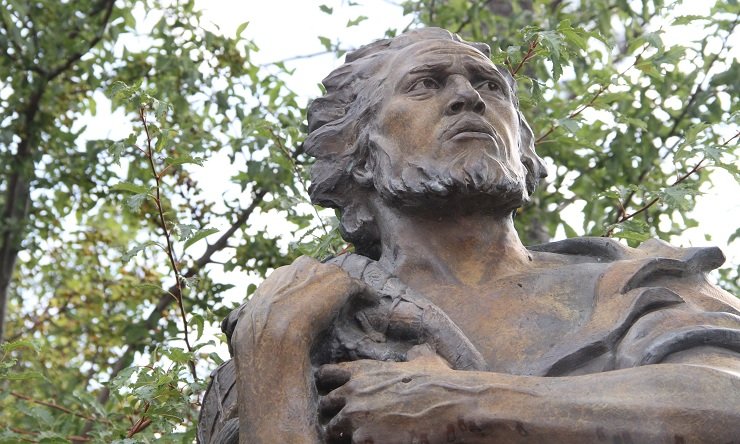 It can be hard to follow the Pope — to accept direction from outside ourselves, to respect every pope, the ones we like and the ones we don’t have a natural affinity for.

St. Elizabeth Ann Seton could be the patron saint of people who follow the pope when it’s hard.

St. Paul also had difficulty following St. Peter — including having to correct him.

But today’s Solemnity of Saints Peter and Paul stands as a testimony that the two great Apostles were reconciled to each other in the end by their shared witness to Jesus Christ in Rome, where both were martyred.

The Catechism says that this authority has been given to all the popes after Peter. The Pope “is the perpetual and visible source and foundation of the unity” of the Church, it explains, and “the Roman Pontiff, by reason of his office as Vicar of Christ, and as pastor of the entire Church has full, supreme, and universal power over the whole Church, a power which he can always exercise unhindered.”

But before Jesus gives the keys of the kingdom to Peter, he asks his Apostles, “Who do people say the son of man is?”

It is Peter who answers, “You are the Christ, the son of the living God.”

“Blessed are you,” Jesus replies, before giving him his special commission. “For flesh and blood has not revealed this to you but my heavenly Father.”

It was much harder for a Protestant in early America to follow the pope. In a country that had just declared independence from a foreign power, the Pope was an Italian potentate who lived across the sea.

It was even more difficult for Elizabeth because, when she did convert and become a pope follower, she suffered scorn and rejection from the people she loved and respected most.

Why did she do it? Because, “I seek but God and his church, and expect to find my peace in them, not in the people,” she said.

She took to praying a prayer of Pope Pius VII to cope: “May the most just, the most high and the most amiable will of God be in all things fulfilled, praised, and exalted above all forever.”

It was not the Pope’s land of origin or his personality that she submitted to, but the origin of his office and the person who chose him. She was a follower not of human rulers, but of Jesus Christ and his will for the pope.

The only way to follow the Pope is to keep your eyes on Christ.

Elizabeth’s relationship with Christ led her to follow Peter, not the other way around.

A great story tells the tale of how she literally turned toward St. Peter from St. Paul, because of the real presence of Jesus Christ in the Eucharist.

She was visiting St. Paul’s Episcopal Church in New York after having learned about Catholic doctrines but before becoming Catholic. The church is a short distance from St. Peter’s Catholic Church.

“I got in a side pew which turned my face toward the Catholic Church in the next street, and found myself 20 times speaking to the Blessed Sacrament there …. Tears plenty, and sighs as silent as deep as when I first entered your blessed Church of Annunciation in Florence, all turning to the one only desire to see the way most pleasing to my God, which ever that way is.”

The experience made Elizabeth the kind of woman who could convince others to follow Jesus and his Church.

Because of that, Pope Benedict XVI called her a “towering figure” who “with great tenacity and foresight, laid the foundations of what is today a remarkable network of parochial schools contributing to the spiritual well-being of the Church and the nation.”

What began in humility and suffering became Elizabeth’s greatest glory.

It always follows the same trajectory. We have to humble ourselves to follow God’s will to the full. We have to say what John the Baptist said: “He shall increase, and I shall decrease.”

St. Peter is well-loved because he did that successfully. Some scandalous popes are remembered shamefully because they didn’t.

It is allegiance is to Jesus Christ through it all, and the authority of Peter he established.

A version of this appeared at the Seton Shrine website.
Image: St. Peter by Frederick Hart on the campus of Benedictine College in Atchison, Kansas.