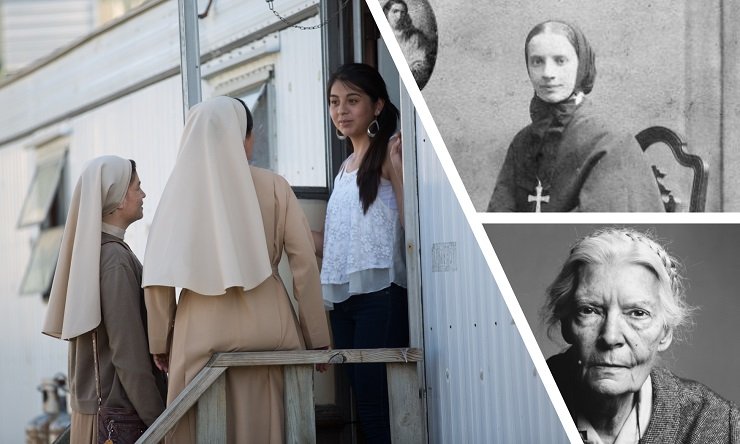 St. Frances Xavier Cabrini is the patron saint of immigrants, and one in a long line of religious women who served immigrants in America — and do so to this day.

Here’s a look at her life and legacy on her memorial, Nov. 13.

After founding of the enormously successful Missionaries of the Sacred Heart of Jesus in Italy in 1880, Mother Cabrini asked Pope Leo XIII permission to go to China. “Not to the East, but to the West!” he said, and sent her to New York in 1887 to take care of immigrant workers.

Italian immigrants in New York were deeply distrusted by the society of the time. They were mocked, dismissed, and taken advantage of, often living in close quarters prone to disease. Mother Cabrini had to care for them, educate them, and fight for their rights in the workplace and even in the Church.

“As embarrassing as it is for me to admit it, even the Church they loved at times neglected them,”
said Cardinal Timothy Dolan. “The bishops and priests — yes, I blush to confess, mostly Irish — with some glorious exceptions, scorned them.”

St. John Paul II said of Mother Cabrini, “Her motherly heart, which gave her no peace, reached out to [immigrants] everywhere: in hovels, prisons and mines. Never intimidated by toil or distance, Mother Cabrini traveled from New York to New Jersey, from Pennsylvania to Illinois, from California to Louisiana and Colorado.”

Mother Cabrini became an American citizen after traveling to America. She died an American who helped change her new nation’s attitude toward Italian immigrants.

In 20th century New York, another holy woman followed in the footsteps of these sisters who worked with immigrants and fought for workers’ rights.

Dorothy Day (1897-1980) was a journalist who was inspired by Upton Sinclair’s The Jungle to use her writing talents to expose oppression. She wrote for socialist publications and led a bohemian life before becoming Catholic.

Dorothy Day was twice a mother before she devoted her life to her vocation of service to the poor.

Two pregnancies led to her conversion — one that ended, painfully and unforgettably, in abortion, and the other which produced her daughter, Tamar.

She also anticipated Vatican II. She wrote: “We are all called to be saints, St. Paul says, and Pope Pius XI has repeated in his encyclical on St. Francis de Sales. It should be an ordinary thing, not a heroic thing. What is being done to make it possible for the worker to be a saint, a good ordinary saint, following the Little Way?”

Sister Norma Pimental had made headlines for serving the poor. But there are many others. In North Dakota, the Daughters of Immaculate Mary of Guadalupe serve immigrants drawn to the new oil production facilities there.

The superstore “is a perfect place,” Sister Brenda told Catholic Extension Society, “Everyone shops there. We walk the aisles meeting people and talking about the parish. Many people have never seen a sister in a habit.”

In southwestern Michigan, the Missionary Servants of the Divine Spirit have come from Colombia to minister to its Hispanic community of migrant farm workers.

Sister Maryud Cortes told the Catholic Exchange Society She said she had “a dream to serve the brothers and sisters who are suffering from psychological illnesses, depression and high levels of stress. When I arrived here in the United States, I heard very painful stories and I encountered the anguish of so many migrant brothers.”

Carmelite Sister of the Most Sacred Heart Mary Scholastica serves as the Director of Advancement for her congregation, which runs several Catholic schools, infant care and preschool programs for the poor, mostly immigrant communities of Los Angeles.

She described how her order’s service begins and ends with prayer..

“We rise at 4:55. We are at prayers at 5:25am, and then have a half hour of quiet meditation followed by mass. Breakfast is at 7:15, in silence,” she said. “After taking care of our convent responsibilities, we go into the areas of service where we are assigned, such as to school, to our retreat center or to our elder care campus. We gather together before lunch, taking time out to reflect on how we have walked through our morning with the Lord and how we responded to his prompting.”

That is how all the best service to immigrants begins and ends.