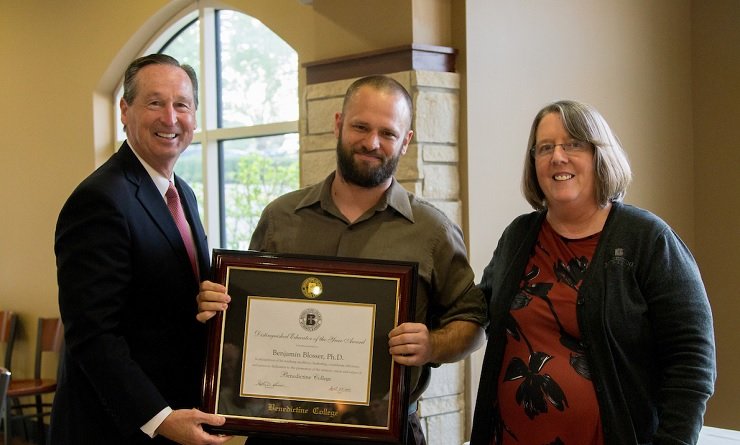 Benedictine College students, faculty and staff nominated Blosser for the distinction, which is the highest honor the college confers on professors. This is the second year in a row the honor has gone to a theologian. Last year, Theology Chair Dr. Richard White was given the honor.

Blosser teaches courses in Church history, ecclesiology and New Testament. He received his Ph.D. in Historical Theology from The Catholic University of America in Washington, D.C. Before teaching at Benedictine College, he worked at the U.S. Conference of Catholic Bishops in Washington, D.C. His work with the Church Fathers focuses in particular on Origen and Augustine of Hippo. He is authored of Become Like the Angels: Origen’s Doctrine of the Soul, and Positively Medieval: The Surprising, Dynamic, Heroic Church of the Middle Ages.

He and his wife, Danielle, live in Atchison, Kan., where they homeschool their eight children. They are expecting their ninth child, and second daughter, later this year.

Blosser received many nominations, which are made anonymously, describing him as an engaging professor who teaches with true passion.

“He creates the most vibrant community amongst his students that I have ever experienced here at Benedictine,” said one student nomination. “He’s incredibly good at what he does.”

“Dr. Blosser is a fantastic teacher, very engaging and knowledgeable,” said another student. “He makes students love what is being taught. He makes class interesting and is helpful in meetings outside of class.”

“It appears that he loves his job, and this motivates students to put extra effort into his courses,” said a third student nomination. “He is an active member of the Benedictine College Community outside the classroom. Dr. Blosser is a living witness to the Catholic faith and the values of Benedictine College.”

Blosser said he is generally an introverted person, but that changes when he is with students.

“When I get in front of a classroom of students I feel alive in a deep way,” he said. “I feel like that’s where I should be and that’s where I belong.”

He said many students had taken the award to heart and were “pulling for him,” but from his perspective, it was a complete surprise.

“I wasn’t expecting it, I think others are more deserving of it than me,” he said. “But it is gratifying, because obviously I work hard here.”