The Church’s Real Story Is Service — Not Abuse 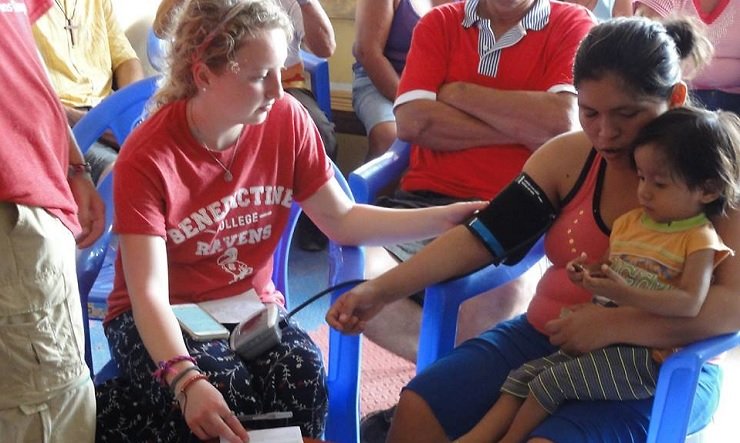 As the focus of the world turns to the Catholic sex abuse summit just completed, it is important to remember the true witness of Catholics in the world.

If not for the counter-witness of the sex abuse scandal, the Catholic Church might be seen for what it is: The dominant force for good in our times. Consider the contributions of the Church with regard to the chief issues of our time.

Catholics were pioneers in civil rights.

The Knights of Columbus admitted its first African American member in the 1890s, when the organization was still relatively new. Catholic leaders marched hand in hand with Martin Luther King Jr., demanding equal treatment and led the way in welcoming blacks into the mainstream of society.

New Orleans Archbishop Joseph Rummel (1876-1964), was a leading example of the Catholic attitude toward civil rights. He desegregated Catholic schools and excommunicated three public officials who opposed the Church’s teaching on racial equality.

For decades, you could look into the pasts of older black leaders in America and discover that many of them were educated in Catholic schools, because when they were young those were the only schools that admitted them.

“To defraud anyone of wages that are his due is a great crime which cries to the avenging anger of heaven.”

That startling statement from Pope Leo XIII’s 1891 encyclical Rerum Novarum launched a worldwide movement that sought fair treatment for workers, not in socialism or unbridled capitalism but in a middle way that stressed the role of churches.

Later, 1948’s Universal Declaration of Human Rights was a boon to Christian activists worldwide and a bane to atheistic dictators. Baylor University’s Paul Marshall traces its development back to the Catholic Church. The French Catholic philosopher Jacques Maritain had an enormous influence on the document, he said, presiding over the earliest U.N. meetings on human rights and serving as “godfather” of the process that produced the declaration.

Catholics invented the rules about how others should be treated in war.

In the 20th century, they helped shape the Geneva Conventions and the Nuremberg Standards and are summed up best in the Catechism of the Catholic Church: “Non-combatants, wounded soldiers, and prisoners must be respected and treated humanely. Actions deliberately contrary to the law of nations and to its universal principles are crimes, as are the orders that command such actions. Blind obedience does not suffice to excuse those who carry them out.”

The Church will be remembered centuries from now as the great defender of the unborn.

As state legislatures embrace the unthinkable — killing babies at every stage of pregnancy, up to and just after birth — the Catholic Church has been the most powerful voice demanding that the barbarism stop. And the Church hasn’t just moralized about abortion, but Catholics have led the way in establishing help for mothers in difficult situations, serving them before and after babies are born.

While the pro-choice movement often leaves women with no choice but to abort, the pro-life movement helps give women more options, facilitating adoptions and providing assistance.

The Church’s service to the poor is another hallmark of our times.

Bishop Robert Barron says that the best way to convert someone, if it were possible, would be to show them the work of Catholics dedicated to Jesus Christ in the poor.

“I would take them to Calcutta, and show them Mother Teresa’s nuns working,” Barron says. “I’d bring them there and say, ‘Look, I’m not going to tell you what to think or how to behave. Just look at them. Just watch them for a while.’ In itself, that would probably be enough.”

But he could go many places besides Calcutta.

“I’ve been to some truly dark places where the suffering would be hard for most Americans to imagine,” Nikki Haley, the Methodist former U.S. ambassador to the United Nations, said last October.

“I’ve been to the border between Colombia and Venezuela, where people walk three hours each way in the blazing sun to get the only meal that they will have that day. Who’s giving that meal? The Catholic Church,” she said. “I’ve been to refugee camps in Central Africa where young boys are kidnapped and forced to become child soldiers and young girls are raped as a matter of routine. Who was in the forefront of changing this culture of corruption and violence? The Catholic Church.”

The Church does “everyday miracles,” she said, “helping millions of desperate people.”

In fact, it is a measure of just how horrific the sex abuse scandals are that they wiped out the record of Catholics in the 20th and 21st century that stands as a testament to the faith’s greatness.

Ultimately, there is only one response to the scandals: Catholic witnesses.

“As both John Paul II and Benedict XVI have said, today’s world stands in great need of witnesses, not so much of teachers but rather of witnesses,” Pope Francis said. “It’s not so much about speaking, but rather speaking with our whole lives: living consistently, the very consistency of our lives! This consistency means living Christianity as an encounter with Jesus that brings me to others, not just as a social label. … Witness is what counts!”