‘We Will Always Be Ravens,’ Sister Tells Grads 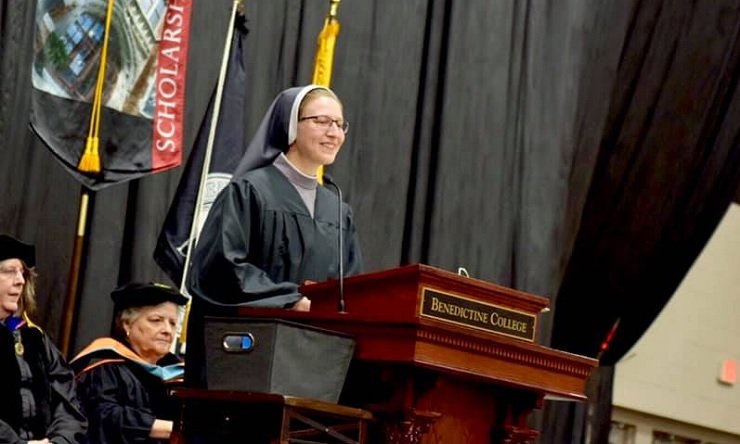 “At this time I would like to introduce our valedictorian. This is the one student who, on this day of academic recognition, has achieved the highest possible academic record,” said Dean of the College, Dr. Kimberly Shankman, at the May 11 Benedictine College commencement ceremony in Atchison, Kansas. “Would Sister Megan Terésè Tunink please join us on the platform?” The remarks of Sister Megan Terésè follow.

This is it. Our graduation day. I stand before you today as your valedictorian. To be honest, there was a time in my life that I really wanted this — to be known as the best. But if there’s one thing I’ve learned during my time at Benedictine, it is this: there is so much more to life than the letters and numbers that appear on your transcript.

There are so many of you that are much more deserving to stand up here and speak of your Benedictine experience. So many of you have contributed so much to this Benedictine College community. You have served as R.A.s, led mission trips to foreign countries, conducted research, competed in national championships, and the list goes on and on.

But, as it is, I am the one that Dean Shankman was frantically trying to get ahold of on Thursday morning to tell me that I was the one chosen to give this speech. And so, after praying about it, I give you some words of wisdom — one thing that I want us all to remember as we move on to the next stage of our lives.

God told us through the prophet Jeremiah: “I know well the plans I have in mind for you — says the Lord — plans for your welfare and not for woe, so as to give you a future of hope.” In case you don’t already know, God is in control. He knows exactly what He has planned for you. And some days His plan is very different than our own.

Maybe it’s a big thing like having all of your classes cancelled because a mysterious gas cloud is working its way towards campus. Or maybe it’s a smaller thing like not being able to focus during your biology test because a jackhammer is tearing down a wall in Westerman. Or it could even be something so insignificant that it shouldn’t really matter — like going to the caf and finding that the ice cream machine is broken — again — and all you really wanted was an ice cream cone to celebrate the feast day of St. Scholastica. Sometimes God’s plan is unexpected, but it is always good.

No matter what the situation is, God has things under control. Don’t be scared of His plan because He knows what He’s doing. And who knows, maybe someday He’ll fulfill a childhood dream of yours that you’d stopped caring about, just because he loves you that much – although he may ask you to speak in front of a thousand people to go along with it.

My last word for you is this: as a graduate of the Benedictine College Education Department, I am a professionally trained builder of community, and so I tell you that this is not the end of the Benedictine community that you have found here. Even though we may be separated, we will always be Ravens, and we will always have the love and support of this community behind us. And because of this we can bravely go: Forward, always forward.