What Makes a Leader? 7 Quotes From Patrick Reilly 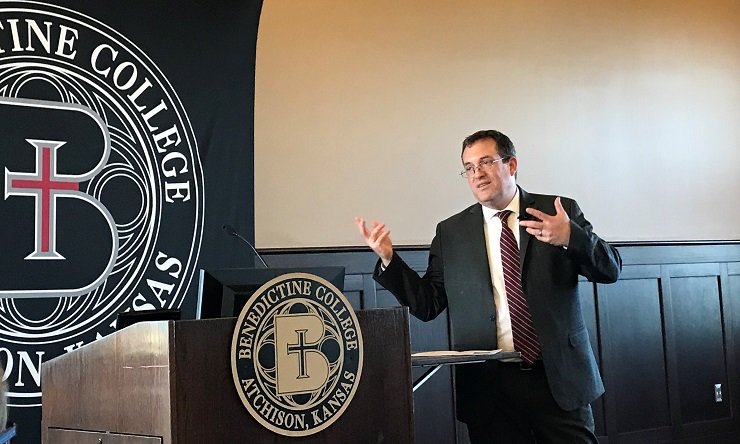 Patrick J. Reilly founded the Cardinal Newman Society in 1993, two years after graduating from Fordham University in New York. More than a quarter century later, he has revolutionized higher education in America.

The guide has helped most of its two dozen “Newman Guide colleges” buck the nationwide trend for declining enrollment, and has caused many universities to strengthen their Catholic identity. In short, due to Patrick Reilly’s efforts, far more students are receiving far better Catholic formation in college than in decades. And since the college years have a profound, lifelong, transformative effect on students, Reilly’s impact on the future of the Church and the nation are enormous.

Reilly lives in Manassas, Va., with his wife Rosario and their five children. He spoke at a Gregorian Fellows leadership class.

On the Newman Guide’s Success

“My plan was that we would put out a guide reviewing all 200 Catholic colleges in the United States. Father Benedict Groeschel was one of our advisers. He told me ‘You really ought to focus on the good things. There are some really good things happening in Catholic education. You ought to focus on that.’ So we decided to recommend schools.”

On Being a Founder

The Key to Leadership

“Fundamentally, one of the key qualities of a leader is confidence. I don’t mean just not being nervous. I mean confidence with regard to your mission.  … That’s what makes you a leader. You can be in the smallest working group, and someone can speak up and you know immediately that they are a leader. Everyone wants to follow confidence. “

Achievement is a Gift

“Ever since I was a kid, I did well in school. I never considered that a big deal. Intelligence was just something God gave me. The things I was proud of were the things I worked hard at and achieved. But I have come to realize that achievement is as much a gift as your talents are. You can work hard and be a good leader and not be successful, and God will make things work in the right way. Talents are a gift. Achievement is also a gift.”

“A leader is also humble. Which is interesting because you tend to think of leaders as prideful. But you have to have what it takes to make a fool out of yourself. You have to swallow a lot of pride if you’re going to be willing to be a leader.”

Second Only to the Sacraments