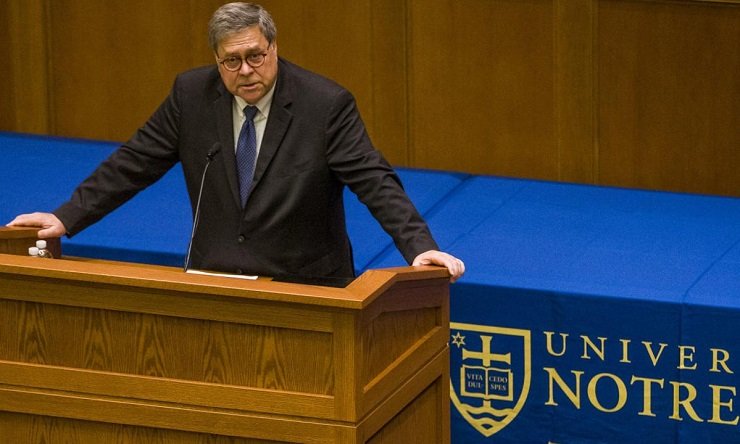 The U.S. attorney general’s words at the University of Notre Dame last week were a brilliant articulation of what kind of free society America was meant to be.

William Barr’s words were also a great example of the Gregorian Institute’s mission, to promote Catholic identity in public life.

“As Catholics, we are committed to the Judeo-Christian values that have made this country great,” he said. “And we know that the first thing we have to do to promote renewal is to ensure that we are putting our principles into practice in our own personal private lives.”

He concludes: “We understand that only by transforming ourselves can we transform the world beyond ourselves.”

Here are 10 great quotes from his speech. Read the whole thing here.

“The imperative of protecting religious freedom was not just a nod in the direction of piety. It reflects the Framers’ belief that religion was indispensable to sustaining our free system of government.”

“The Founders decided to take a gamble. They called it a great experiment. They would leave ‘the People’ broad liberty, limit the coercive power of the government, and place their trust in self-discipline and the virtue of the American people.”

“This is really what was meant by ‘self-government.’ It did not mean primarily the mechanics by which we select a representative legislative body. It referred to the capacity of each individual to restrain and govern themselves.”

“[I]n the Framers’ view, free government was only suitable and sustainable for a religious people — a people who recognized that there was a transcendent moral order antecedent to both the state and man-made law and who had the discipline to control themselves according to those enduring principles.”

“Modern secularists dismiss this idea of morality as other-worldly superstition imposed by a kill-joy clergy. In fact, Judeo-Christian moral standards are the ultimate utilitarian rules for human conduct. They reflect the rules that are best for man, not in the by and by, but in the here and now. They are like God’s instruction manual for the best running of man and human society.”

After citing the terrible record of family breakdown, mental illness, drug overdose, suicide and violence: “I will not dwell on all the bitter results of the new secular age. Suffice it to say that the campaign to destroy the traditional moral order has brought with it immense suffering, wreckage, and misery. And yet, the forces of secularism, ignoring these tragic results, press on with even greater militancy.”

“We hear much today about our humane values. But, in the final analysis, what undergirds these values? What commands our adherence to them? What we call “values” today are really nothing more than mere sentimentality, still drawing on the vapor trails of Christianity.”

“First is the force, fervor, and comprehensiveness of the assault on religion we are experiencing today. This is not decay; it is organized destruction. Secularists, and their allies among the ‘progressives,’ have marshaled all the force of mass communications, popular culture, the entertainment industry, and academia in an unremitting assault on religion and traditional values.”

“Christianity teaches a micro-morality. We transform the world by focusing on our own personal morality and transformation.  The new secular religion teaches macro-morality. One’s morality is not gauged by their private conduct, but rather on their commitment to political causes and collective action to address social problems.”

“The problem is not that religion is being forced on others. The problem is that irreligion and secular values are being forced on people of faith. This reminds me of how some Roman emperors could not leave their loyal Christian subjects in peace but would mandate that they violate their conscience by offering religious sacrifice to the emperor as a god.”