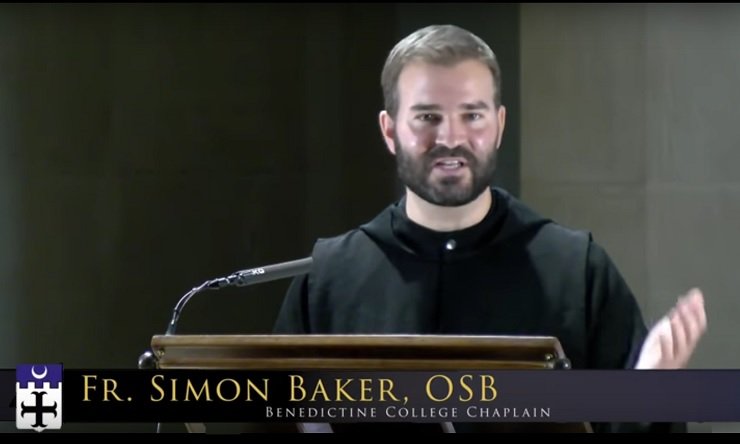 At the end of an exhausting four-day retreat conducted via streaming conferences and liturgies for thousands of retreatants on six continents, retreat master Father Jay Kythe was exhausted.

He thanked the team of monks at St. Benedict’s Abbey in Atchison, Kansas, who made the retreat possible, including assistant retreat master Brother Angelus Atkinson and AV/Tech monk Brother Jerome Simpson, and promised to answer emails soon.

The Holy Week retreat represented a herculean effort on the part of the monks. The Abbey has provided the retreat for Benedictine College students for 20 years, but once it was announced online, its audience grew enormous. The Abbey and college recruited new participants and a story on the international Catholic website Aleteia told readers worldwide about it.

Abbey leader Abbot James Albers said, “Even before the stay-at-home order was issued by the State of Kansas, we had decided to cancel all of our Abbey retreats for the spring and early summer, which included our annual Holy Week Retreat for our Benedictine College students.”

But he said that Father Jay and Brother Angelus immediately asked for the retreat to go on, as a “retreat in place” with materials offered by email and streaming video. Abbey communications director J.D. Benning helped the retreat team. “In our original e-mail back and forth Father Jay expected up to 100 people,” he said. “We reached that number in the first few hours of launch.”

Ultimately, he said more than 3,000 people were listed as registrants for the retreats, with 1,450 households registering and entering the number of people participating.

Abbot James was amazed. “To see the live numbers for the individual conferences and the prayer requests and questions pouring in was astounding, with retreatants joining us from the continents of Australia, Europe, Africa, and Asia – numerous time zones away,” he said.

Father Jay was amazed, too. At the end, after thanking the monks involved, he said, “Most of all, I want to thank God for his providential plan. If it were not for the pandemic we wouldn’t have had a retreat like this,” he said. “This is an experience of divine providence, one I probably would not have wanted, but in fact this is the one God has ordained for us in his providential plan, and so we must thank him.”

One way things were changed for the better by the retreat was in the Abbey itself, said Abbot James.

“As abbot, it was extremely gratifying to see how the brothers worked together, along with our lay communications director, who is working from home, to make the retreat happen through the internet,” he said. Monks learned in record time how to run cameras, incorporate a video switcher for multiple shots and graphics, and put together a computer network that made it all work.

“We were allowed to be part of so many people’s celebration of the Holy Triduum during this difficult time — even being forced apart, we were singularly united as the one Body of Christ,” said Abbot James.

And after a panel of monks were brought to tears reflecting on their distance from their flock, one commenter wrote: “This discussion moved my heart more deeply than I can express.”

“Thank you, Fr. Simon, for sharing your insight on the joy, the victory, that comes through uniting myself with Christ, through fully surrendering to the Cross,” said a commenter on Good Friday.

“Br. Leven, Your wisdom on silence far exceeds even lofty expectations! I am grateful for the Holy Spirit’s speaking in you,” said another on Holy Saturday.

“Your conference this morning truly radiated the Risen Christ,” said one commenter on Father Jay Kythe’s Easter morning conference. “Thank you!  I shall return to this video regularly to always and every moment to keep my eyes on Christ that I may faithfully take my place in ‘his story.’”

Viewers can still share in the main talks and conferences of the retreat. Here are the non-liturgical portions of the conference with links to watch on YouTube:

Conference #1: Introduction to Liturgy of the Hours, by Brother Leven Harton and Father Jay Kythe

Conference #2: Communion, An Ever Present Reality, by Father Meinrad Miller

Conference #3: The Joy of Full Surrender, by Fr. Simon Baker

Conference #4 Entering the Silence That Changes Me, by Brother Leven Harton

Conference #5 The Resurrection: A Journey We Must Make, by Father Jay Kythe

Registration for the retreat remains open so that those who wish may access all of the retreat materials including the Guide which includes valuable sections on Lectio Divina, silence and prayer and the Stations of the Cross books that are the principal materials available to retreatants.