Archbishop Remembers the World’s ‘Second Most Beautiful Woman,’ His Mother 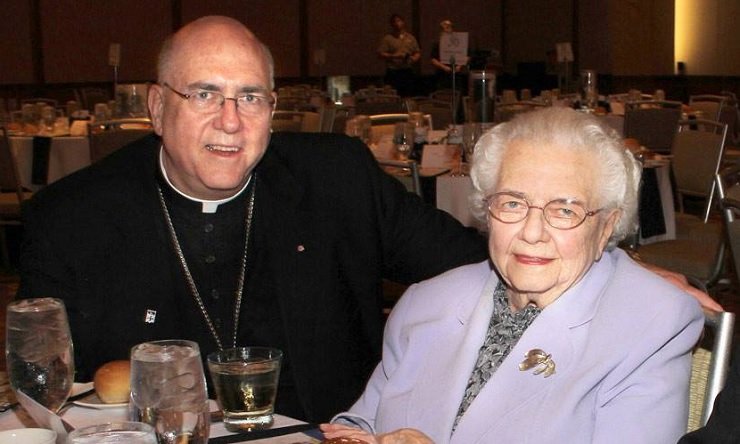 Louise Naumann died Sept 26 in Olathe, Kansas, at age 97. Her famous son, Kansas City, Kansas, Archbishop Joseph Naumann, an honorary Raven, visited Benedictine College in Atchison, Kansas, the next week. Two years ago, the monks on campus celebrated both at a special Abbot’s Table dinner. In his October column in The Leaven, the Archbishop, who heads the U.S. bishops’ pro-life committee, reflected on her life. Here is an excerpt.

I remember as a child thinking that my mother was the most beautiful woman on the planet. I suspect that many children think this about their mothers. Her high school graduation and wedding photos only confirmed my bias about her physical beauty.

Gradually, through the years, I began to appreciate that my mother possessed a much more profound beauty. She was first and foremost a woman of great faith and heroic virtue.

Mom was a widow for almost 72 years. Her response to my father’s murder was a defining moment in her life.

Marcella Wiest was one of my mother’s dearest  and most faithful friends. My father and Marcella’s husband played on the same semi-pro baseball team. After my father’s sudden death, Marcella confessed being fearful to contact my mother. Marcella did not know what to say to my mom to comfort her. When Marcella — despite her understandable anxiety — reached out to my mom, she was amazed at my mother’s serenity. Mom was not consumed with her own grief, but was interested in hearing about Marcella and her family. Marcella was not Catholic, but she admired my mother’s faith.

After my father’s death, Mom completed in only three years a bachelor’s degree in education. How she was able to support our family on a Catholic elementary teacher’s salary was an economic miracle. She made many personal sacrifices so my brother Fred and I had everything we needed. I remember waking up in the middle of the night to find Mom scrubbing and waxing the linoleum floors in our kitchen and hallway.

When the Sisters of St. Joseph could no longer staff our parish school, my mother was the pastor’s choice for the new principal. Mom was a natural leader. She enjoyed mentoring young teachers. More than anything else, Mom wanted to help her students fall in love with Jesus and his Church.

When my brother and I were in high school, Mom went to 5:30 a.m. Mass at a neighboring parish and came home to prepare a bacon and egg breakfast for us. After getting us off to our respective schools, she attended 8 a.m. Mass with her students. She chose to go to daily Mass twice, because, during the school Mass, she had to be focused on the behavior and needs of her students. The earlier Mass allowed her to be completely focused on the miracle of the Eucharist.

When my mother was a child, her parents were Christmas and Easter Catholics. Thanks to visits of the Legion of Mary, my grandparents enrolled Mom in the equivalent of the parish school of religion. She enjoyed learning about God and the Catholic faith. Her love for Jesus and the church was the catalyst eventually for my grandparents becoming very devout and active members of the parish. Mom was forever grateful for the difference the Legion of Mary had made in her own faith life.

She loved the spirituality of the Legion of Mary with its balance of prayer and apostolic work. When I was a child and teenager, we prayed the family rosary every night. In recent years, I began praying the rosary with Mom every night over the phone. For the last three months with Mom at Villa St. Francis in Olathe, I was able to pray the rosary with her every day.

The night before she died, she prayed the rosary with great attention and devotion. During these months, the rosary was rarely not in her hand. Many people have asked what they can do to support me and honor my mother. Beginning, recommitting or persevering in praying the daily rosary would delight my mother. If you want to experience what made my mother both strong and joyful, then allow Mary to draw you close to Jesus through the rosary.

I give thanks to God for giving me such a beautiful mother. Mom was doing missionary discipleship before anyone had coined the term. When her body was wearing out, she never lost a beauty that was much greater than physical appearance. Next to Mary, I still think my Mom is the most beautiful woman!