Are You the Scarecrow, the Tin Man, or the Lion? 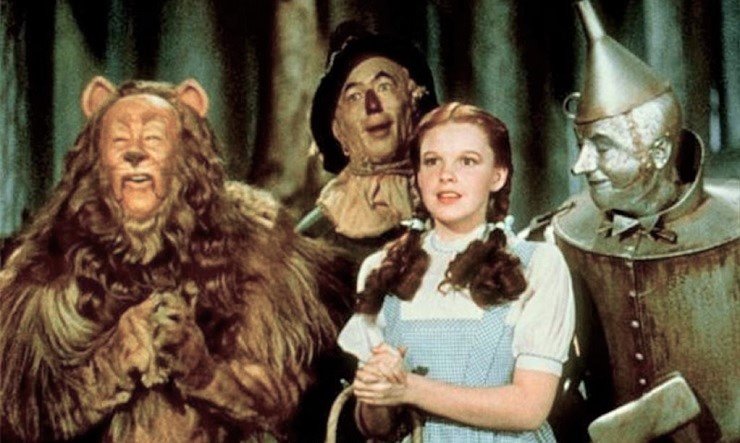 It was 120 years ago that Frank Baum first published The Wonderful Wizard of Oz and 80 years ago that the film version won its Academy Awards, and it has become an American parable.

“Time has been powerless to put its kindly philosophy out of fashion,” says a title card at the beginning of the movie.

What does it mean for us? For one thing, the magical journey of Dorothy with the Tin Man, the Scarecrow and the Lion can help illustrate three 21st century spiritual maladies that Pope Francis identifies in his Joy of the Gospel.

The Scarecrow is an icon of the age of information.

After Dorothy crash-lands on a witch in the Land of Oz and heads out on the Yellow Brick Road, she meets a Scarecrow with no brain. Instead his head is full of straw. When Dorothy asks him how he is able to speak, he says, “Some people without brains do an awful lot of talking, don’t they?”

Yes, they do. As Pope Francis put it: “We are living in an information-driven society which bombards us indiscriminately with data — all treated as being of equal importance — and which leads to remarkable superficiality in the area of moral discernment.”

We have supercomputers in our pockets and have access to information of all kinds at our beck and call. But facts without Truth leave us no better off — and possibly worse, because what good is an arsenal of facts without the interior equipment to direct them?

When Dorothy asks directions, the Scarecrow says, “This is a very nice way,” indicating one direction with one hand. Then, “It’s pleasant down that way, too,” he says. “Of course, some people do go both ways,” he adds.

The Tin Man is homo economicus, the human person as economic unit.

We all are a little like the Tin Man. St. John Paul II said “Work was made for man, not man for work,” but we live to work rather than working to live. We think material goods will make us happy, and so we work more in order to fill our diminishing moments of downtime with shiny new things.

They don’t help us. As Pope Francis put it in Joy of the Gospel, we quickly lose our heart: “The great danger in today’s world, pervaded as it is by consumerism, is the desolation and anguish born of a complacent yet covetous heart, the feverish pursuit of frivolous pleasures, and a blunted conscience.”

The Cowardly Lion is us on social media.

When Dorothy and her companions first meet him, the Lion is full of bluster and threats. But when Dorothy stands up to him, he backs down immediately, whimpering.

“Why, you’re nothing but a great big coward!” she says.

“You’re right, I am a coward!” says the Lion, bursting into tears. “I haven’t any courage at all. I even scare myself.”

This is what happens to people who interact with the world mostly online. We have bold opinions and strong stances, but can’t handle ourselves with a real human being.

But Pope Francis points out that bluster gets us nowhere. People can only be reached with “attitudes which foster openness to the message: approachability, readiness for dialogue, patience, a warmth and welcome which is non-judgmental.” In other words, with “courage, boundless love and attraction!”

Ultimately, the only way out of these three ideologies is to risk yourself for others.

At one point in the movie, the Wizard tells the Tin Man, “You don’t know how lucky you are not to have one. Hearts will never be practical until they can be made unbreakable.”

He is right. Once we are caught in the cycle of self-seeking comfort, it can seem unbearable to try another way. But we must. The pain of generosity brings more happiness than the comforts of selfishness.

The Scarecrow only gets his brain by planning ways to help Dorothy, and the Lion finds his courage by marching into the witch’s castle to rescue her, tucking his tail into the uniform he is wearing as a disguise.

The lesson? You only find yourself by giving yourself away.

As Pope Francis put it, “The Gospel tells us constantly to run the risk of a face-to-face encounter with others, with their physical presence which challenges us, with their pain and their pleas, with their joy which infects us in our close and continuous interaction. True faith in the incarnate Son of God is inseparable from self-giving, from membership in the community, from service, from reconciliation with others.”