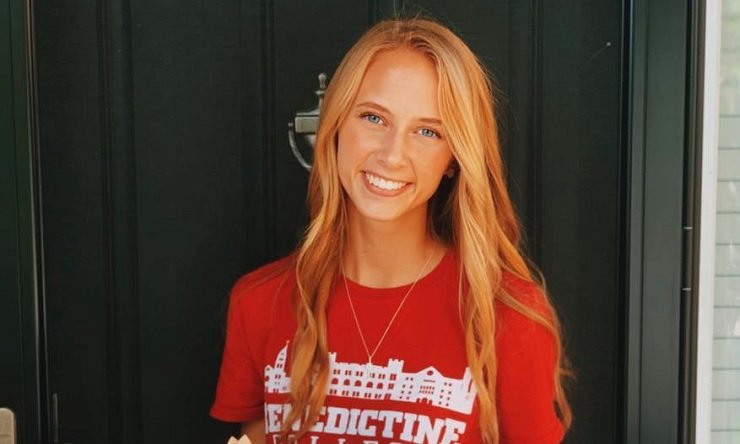 The Gregorian Fellows leadership program at Benedictine College is designed to train and launch Catholic leaders rooted in their faith and ready to be effective in contemporary society. The work of the Fellows is often featured here on Fridays.

At The Leaven, Marc and Julie Andeson tell the story of a high school student who did the impossible: She started a pro-life club at a public high school.

Emily Yohon of Overland Park, Kansas, is no longer in high school, though. She is a freshman at Benedictine College and a Gregorian Fellow.

She was inspired to start the club when she saw a documentary in which a former abortionist describes a late-term abortion.

“I just realized I need to reach out to other people who have the same views and beliefs and spread that word and get others to believe that,” she told The Leaven.

She discussed the matter with her parents and then the administration of her school, Blue Valley Northwest High School. She learned she needed a faculty advisor.

She thought she had the perfect candidate, but the teacher she had said No. “She said she had too much going on and couldn’t,” Yohon said.

But another teacher overheard her request and came forward saying, “I’m in!”

Yohon opened up membership and 50 students signed up. About half that formed the core membership of the team, and that number is still growing strong at the school. Yohon is proud to report that the group represents a microcosm of the school: Boys and girls, freshmen through seniors, different races and ethnicities, Protestants, Catholics and even atheists.

Some students objected that such a club should not be allowed at a public school. Yohon disagreed. So did administrators.

“The administration said we have a right to be here,” Yohon told The Leaven.

Read the entire Leaven article here for more, including the inspiring words from members of the group who have coped with losing friends over their involvement.