“Go Chiefs! Time to make due on your prayers,” Father Jeremy Heppler posted on the Facebook of St. Benedict Church in Atchison, Kansas, on Super Bowl Sunday night. “The Adoration Chapel is open and Mass is at 8:15 a.m.”

But there were two people he didn’t hear victory prayers from: Harrison Butker, the kicker for the Chiefs, and Father Richard Rocha, an alumnus of Benedictine College in Atchison.

The Chiefs have other Catholic connections: Kansas City-St. Joseph Bishop James Johnston won a free dinner in a friendly bet against San Francisco Archbishop Salvatore Cordileone. Punter Dustin Colquitt thanked St. Michael — the parish and the archangel — for support during the game. And two Chiefs — linebacker Dorian O’Daniel and cornerback Kendall Fuller — were teammates at Our Lady of Good Counsel High School in Olney, Md., where they host a summer camp for underprivileged youth.

But Butker’s and Rocha’s stories show the closest Catholic ties to the World Champion team. 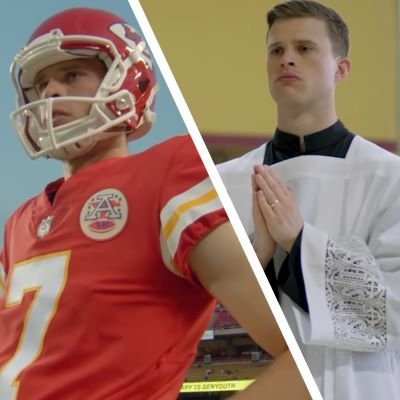 Respect for faith starts at the top on the team. The Super Bowl MVP quarterback Patrick Mahomes said “I’m trying to maximize and glorify [God] in everything I do.”

Chiefs Chairman and CEO Clark Hunt has said “My identity is my faith in Christ,” and, “We want our employees to develop spiritually.”

Spiritual development is what helped Harrison Butker deal with the pressure of the big game.

The pressure was so high on the Chiefs’ Catholic kicker that even the Chicago Tribune had predicted “Super Bowl LIV could be decided by … Chiefs’ Harrison Butker.”

But “I’m not praying about the Super Bowl,” Butker told EWTN in an interview. “I pray for myself to be a good husband and father.”

After Sunday, Butker is a world champion in the National Football League. But his love for the Eucharist makes him value his altar service at an Extraordinary Form Latin Mass in Kansas City even more highly.

“From high school I was still a Christian but I wasn’t a strong Catholic,” he said. “I went to college and completely stopped going to Mass and stopped having much of a prayer life.”

This caused him to feel a great “emptiness” in his life. “I liked football but there was nothing I was really passionate about, nothing that I saw as more important.”

That’s when he met Georgia Tech punter Grant Aasen. “This guy was very energetic,” he said. “He had this spark and it turned out that he was Catholic and he was on fire about his faith.”

Grant took Harrison to see a priest. “The biggest leap of faith for me was finally going to the sacrament of confession. When I wept at confession,” he said, “that’s when I kind of changed my life around.”

He started “striving to be a saint” by trying to live “a pure and saintly life.”

Now, he identifies by “Number 1, my Catholic faith. I’m also a husband and father, but I’m doing my best to use the platform God has given me to evangelize and bring beauty and truth to others around me and to help expose them to the truths of the Catholic Church.”

A Raven Priest in Miami 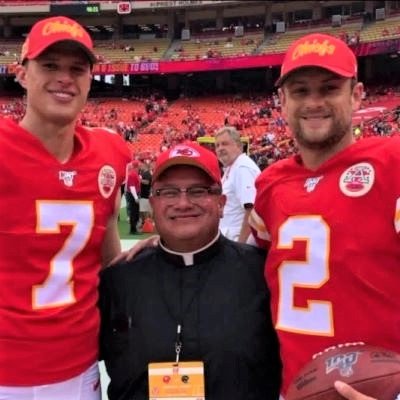 Another member of the World Champion Chiefs organization who did not pray for victory in the Super Bowl was Father Richard Rocha, who was born in Atchison, Kansas, and played for Benedictine’s Football Ravens before becoming a football coach in the area.

“When I was coaching, I never prayed that we win the game, but I did and still do pray that both teams have no serious injuries and that they both play well,” he told the Examiner in Jackson County, Mo.

Although, he added, “And then I pray that we play better and make fewer mistakes than our opponent.” That prayer was certainly answered on Sunday, at least in the fourth quarter.

Rocha remembers being called out of football and into the priesthood.

“I remember asking God where He was leading me,” Rocha told the Examiner. “And as it turned out, He was wanting me to coach on ‘His team!’ 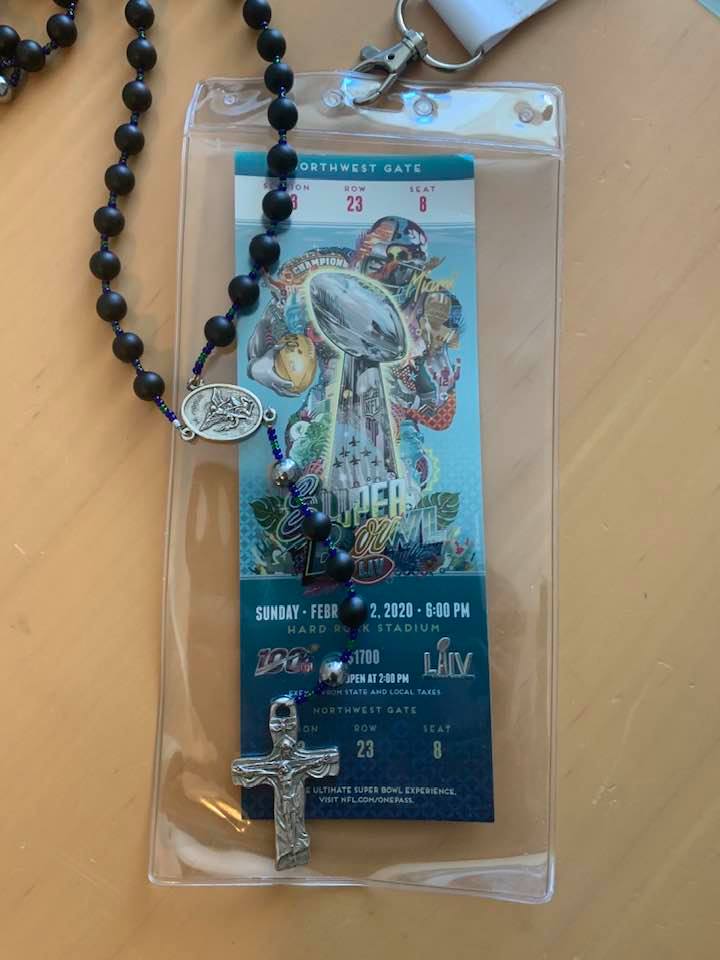 “And all I could say was, ‘If I am going to give up everything — my love for coaching and getting married and having a family — to follow You, what’s in it for me Lord? And the Lord has truly blessed me in my journey.”

Now as a priest he has two jobs — pastor at St. Robert Bellarmine Church in Blue Springs, Mo., and chaplain for the Chiefs.

He said Mass in Miami for Catholic members of the team before the game and said he made sure to bring two things to the stadium with him, shown here: His ticket and his Rosary.