Catholic Identity on the Front Lines 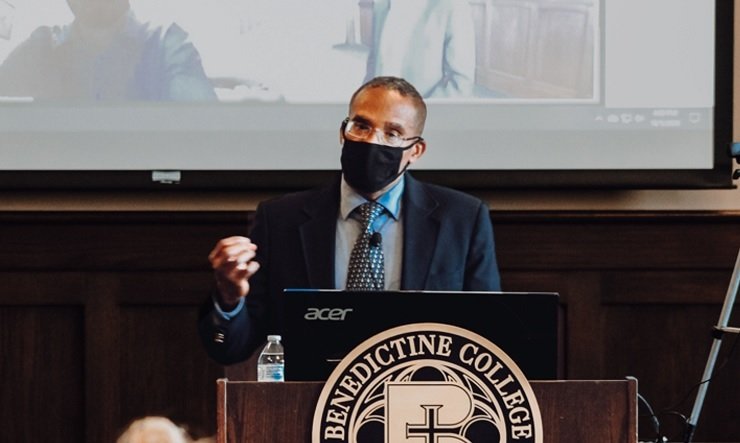 The Gregorian Fellows leadership program at Benedictine College is designed to train and launch Catholic leaders rooted in their faith and ready to be effective in contemporary society. The work of the Fellows is often featured here on Fridays.

Do you live your Catholic identity in public life? Even when it hurts?

That’s what Dr. Ronald Smith, a former colonel and physician in the United States Army, asked Gregorian Fellows at Benedictine College in October.

Smith’s service has taken him all over the world: Poland, Eastern Ukraine, the Sinai peninsula, Laos, and multiple times in Korea and Germany. He has been chief executive at two clinics, a medical battalion, and a hospital.

Smith was also involved in the response to the attack on the twin towers in Afghanistan.

His presentation used examples from his own military experience and related it to faith and decision making. He spoke of “wrestling with God” over both small and large decisions throughout life, ranging from issues surrounding abortion to making Sunday worship a priority, even in a war zone.

His experience was eye-opening to students.

“Beginning with prayer,” said Christian Noskey, a junior from Seffner, Fla.,“the little things he does during his daily life really showed a path to what we can do as we wrestle with God on a smaller scale.”

Smith recommended the Book of Proverbs, Chapter 8, which depicts Wisdom calling out to and delighting in the human race.

“When he fixed the foundations of earth, then was I beside him as artisan; I was his delight day by day, playing before him all the while, laying over the whole of his earth, having my delight with human beings.”

“This is, for me, one of the most powerful verses (verse 31),” he said. “Because here is the Wisdom of God, the Holy Spirit, playing on the surface of the earth and having delight with human beings.”

That verse struck the students, too.

“Our world is made for us to be fighting and grappling with what’s true and, even though our faith gives us clarity, we still have to grapple with it and learn from experience,” said Julianna Zimmer, a freshman form Centennial, Colo. “This class, overall, has really opened my eyes as to how we are supposed to live out our faith through our careers.”

Smith said the Lord wants us to “wrestle”

“He wants us to come to him through it all, because he knows we won’t get it right,” he said. “He wants you to come to him, and he will make it work.”

Samuel Anderson, a freshman from Minneapolis, said Smith’s words taught him “how we can be Catholic leaders without being too militant about it, and approaching people with love, not from a position of fighting them,” he said.