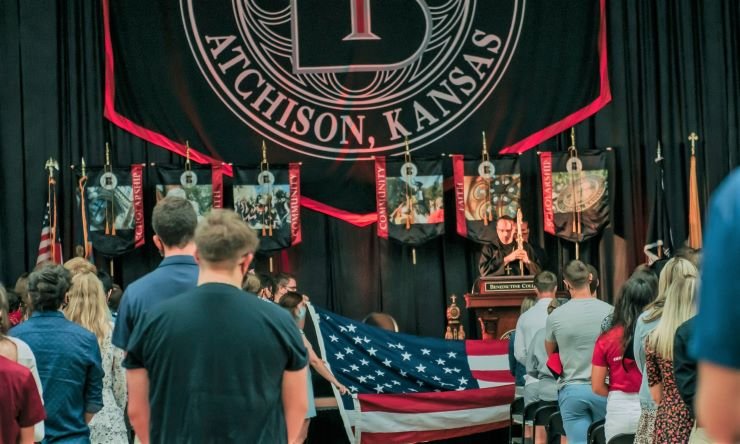 A Catholic college is called upon to help shape its surrounding culture with Gospel truths and values, to dialog with a pluralistic society, to help shape public opinion, and by so doing to be part of the New Evangelization.

We are citizens in two worlds simultaneously: the City of man and the City of God. We are faithful disciples and patriotic citizens. A Catholic college cannot be content with being a subculture, full of introspection, unconcerned about the broader world. True, it must control its own environment, so that serious thinking and the formation of conscience and character can take place. It must also be activated yeast, strong salt, and an agent of conviction and courage. But its mission is to the broader world, where the fields are ripe and the potential harvest is great.

Like the Church, from whose heart she emerges, a Catholic college exists to serve the world with its intellectual apostolate. It brings faith and reason to bear upon the major issues of the times. It does not have readymade solutions for all the problems in the political, economic and cultural orders. That is the task for people with special expertise and training. Rather, her task is to form consciences with the values and principles which are derived from God’s Eternal Law, from God’s basic plan for His human race so that it may live in harmony and peace.

One of Benedictine College’s goals is to engage and transform the surrounding culture. She will do this by forming faithful disciples and patriotic citizens.

I speak with some experience about these matters. My doctorate is in moral theology (1986 from Catholic University of America), which is the art of applying good moral principles to concrete problems, with the purpose of advancing the good, while exposing and resisting the evil. I have served in parishes, in campus ministry at the University of Kansas and at Benedictine College. I taught theology for ten years at Benedictine College. I worked for ten years with Human Life International, the world’s largest pro-life organization. This drew me inevitably into politics, because that is where public policy is determined and where tax dollars are allocated. With HLI, I worked in over 55 countries giving speaking tours, organizing major conferences, writing and using the public media. These are all channels by which the New Evangelization occurs. 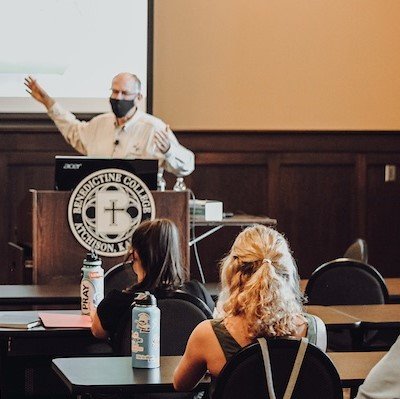 There are over 200 Catholic colleges and universities in this country, which has the largest number of all the countries. A Catholic college has a twofold task. The first task is to help undergraduates to learn how to think deeply and comprehensively. There is so much to learn from our rich religious and secular heritage. We learn from the past accomplishments of our predecessors. This is resourcement. But this must lead to learning how to cope with the major issues of our times. This is aggiornamento. Faith becomes integrated with reason. Faith is our relationship with God, the First Truth, who designed the entire material universe and human nature. Faith applies to every intellectual discipline. It is the bonding among all the various disciplines because it deals with the mind of God, who is the source of all that exists, and of all truthful understandings of what exists.

A college education is more than intellectual formation. We must learn how to use our knowledge correctly. This requires the formation of conscience, a sense of morality, what are the demands of the good, and the damage/dangers of the evil. A true Christian anthropology recognizes that we have a fallen human nature, more prone to sin and vice than to goodness and virtue. This requires a methodical approach to the formation of character, by advancing into all the various virtues.

The great resources that a Catholic college employs for this are: the Sacraments, Campus Ministry, and courses in Catholic theology and philosophy. All this concerns the education and formation of the student. But there is much more to be done. These is more to a Catholic education than discipleship.

Serious consideration must be given to the second great task for Catholic higher education, and this is patriotic citizenship. After graduation, the vast majority of graduates will become spouses, parents, parishioners, employers or employees, colleagues, members of organizations and political parties. Even now, as an undergraduate, they should be aware of the challenges and responsibilities that await them. Our graduates bring more than an expertise in their chosen disciplines to the working world. They bring a worldview, a moral sense, a critical analysis of what is flawed in the world and needs repair. But will they also bring with them the skills and insights that are required to bring about much needed social reform?

Students need to learn how to be effective members of organizations, how to dialog in a pluralist society, how to cope with ambiguity and uncertainty, how to build coalitions and consensus, how to use their ingenuity in finding workable solutions to pressing problems. What motivates them to do all this is their Faith, the assurance that God wants them to be a positive influence for the good wherever they are.

But is the Catholic college preparing them for this? If a professor has not experienced these dynamics himself, then how can he give convincing demonstration of how this is done? The tools of the trade of academia are lectures, seminars, papers, films, guest speakers, etc. This is all theory. But how do we put good theory into practice? How do we cope with the secular world on its terms, especially since they are the majority? If a Catholic college wants to transform its surrounding culture, then it must learn how to engage it, how to shape public opinion, how to find a language which communicates with the secular world, how to use convincing argument to shore up their positions, and how to build coalitions and consensus.

Catholic colleges are in a privileged position to be a resource for their graduates. Ideally, the faculty can produce position papers on contemporary problems, which give good analysis and argumentation to graduates who are now confronting contemporary problems directly. Graduates are an extension of the college. They are the soldiers in the trenches. But all this presupposes that the faculty and administration of the college are skillful patriotic citizens themselves. 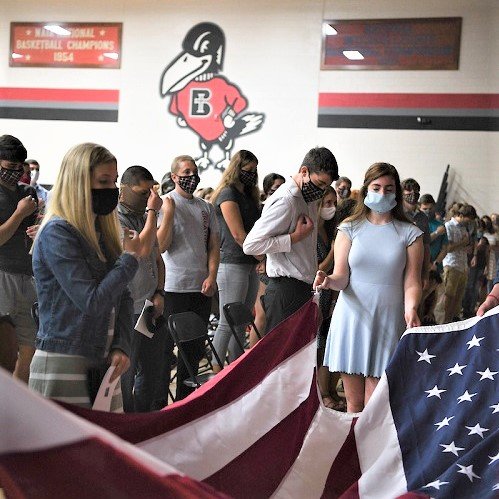 Concretely, there are some practical implications for a Catholic college. 1) The faculty and administration must be well informed on current issues. 2) They must be part of the political process. Be active in your political party at the local, state and federal levels. 3) know how to present a well-reasoned defense of moral positions (e.g. the nature of sex, marriage, family, there are only two sexes, the sacredness of all human life, what all goes into a just society; be able to explain the evils of slavery, discrimination, abortion, euthanasia, the arms race, population control, divorce, pornography). 4) Know the U.S. Constitution well and the principles for which it stands and have worked well for two centuries. Be able to defend a democracy with stresses ordered liberty, civil debate, civic and economic responsibility, patriotism, equal opportunity but not guaranteed equal results. 5) Discuss and debate contemporary issues facing the nation and the Church openly in the classrooms and on the campus

A major part of the identity of a Catholic college is its sustained effort to transform the surrounding culture with the values of the Gospel. If it is to move beyond the rhetoric of this claim, then it will take concrete measures whereby its influence can be felt in the surrounding culture. This will inevitably provoke some pushback, some hostile resistance, and perhaps some bad publicity. But these are the terms which accompany the prophetic stance of those who would change the culture for the better. It is helpful to keep good examples before us: the Popes of the 20th century, Mother Angelica of EWTN and even non Catholic figures like Abe Lincoln, Martin Luther King and Mahatma Gandhi.

Images: Blessing of the flags at the 2020 Convocation at Benedictine College in Atchison, Kansas.