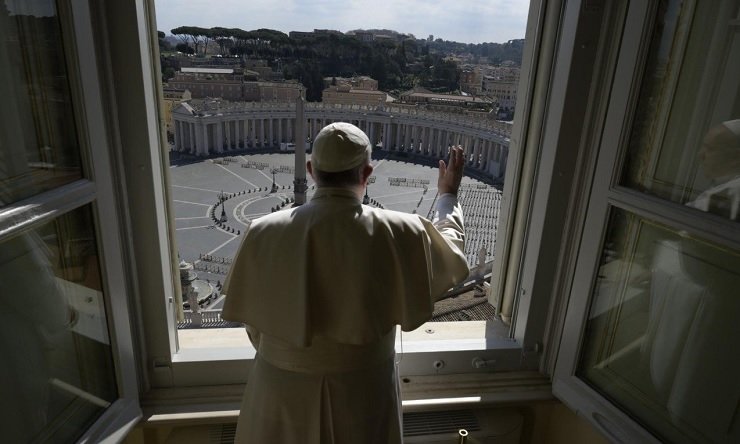 There are two ways to look at what is happening in the United States and across the world with the coronavirus pandemic.

You can see it as a massive panic bordering on overreaction as people cut each other off out of fear. Or you can see it as a beautiful exercise in solidarity, where people who do not have much to fear from the virus are willing to go out of their way to protect those who do.

St. Augustine said God “would never allow any evil whatsoever to exist in his works if he were not so all-powerful and good as to cause good to emerge from evil itself.”

This is exactly what he is doing with the coronavirus. The Church that was born at the crucifixion, lived through the age of martyrdom and the plague, and remains a beacon of hope to the world, has a lot to say about situations like this.

First: Catholics have the comfort their neighbors in need.

People are lonely and anxious and upset. They want to know why this is happening, and what hope there is for the future. “There is not a single aspect of the Christian message that is not in part an answer to the question of evil,” says the Catechism of the Catholic Church, 309.

We have faith. When God asks us to suffer, we know that he is not asking us to do something he wouldn’t do. As Pope Benedict XVI put it, “Christ took the lowest place in the world — the cross — and by this radical humility he redeemed us and constantly comes to our aid.”

We have hope. There was a crisis of hopelessness in the world even before the virus. But Christians uniquely have hope. “We do not know what the [future] has in store for us, but we are certain that it is safe in the hands of Christ, the ‘King of kings and Lord of lords’,” said St. John Paul II.

Second: Catholics know that each of us exists to serve our neighbor.

St. Jerome, who created one of the first translations of the Bible, was one the greatest scholars of all time. But when a natural disaster in 404 meant that refugees flooded his region, he put all his scholarly work aside.

He became “completely absorbed in the duties that charity imposes on me,” he wrote. “Today we must translate the precepts of the Scriptures into deeds. Instead of speaking saintly words, we must act them.”

What can we do?

Help vulnerable neighbors. One woman described on Facebook how she left cards with her phone number on them in the mailboxes of elderly neighbors, offering to do whatever they need.

Help vulnerable businesses. One recommendation is to help hard-hit small businesses by buying gift cards now to use later when the difficulty has passed.

Donate blood. Less will be given as people stay home, and more will be needed as more people go to the hospital.

Donate food. With all of the hording going on, people who have a tough time getting food are having a tougher time than ever.

Third: Catholics know how to offer up inconveniences for others.

For most of us, the coronavirus pandemic will mostly mean suffering inconveniences. Offering these to Jesus can do real good.

“What does it mean to offer something up?” said Pope Benedict XVI in his encyclical Spe Salvi, In Hope We Were Saved. It means you “insert these little annoyances into Christ’s great ‘compassion’ so that they somehow became part of the treasury of compassion so greatly needed by the human race. In this way, even the small inconveniences of daily life could acquire meaning and contribute to the economy of good and of human love.”

Fourth: Catholics can even offer up the sacraments they love.

People all over the world have a hard time receiving the sacraments. In the United States, we have an embarrassment of riches.

As my friend Rebecca Teti put it, when Masses, Adoration, and even confession are less accessible, we are invited to understand the pain brothers and sisters suffer all over the world where the sacraments are not as available.

“Woman, why are you weeping?” two angels asked Mary Magdalene as she stood by the empty tomb. “They have taken my Lord, and I don’t know where they laid him,” she answered (see John 20:13). Rebecca said we can all relate to her now.

Our faith was made for tough times.

Each of our churches has a crucifix in the center depicting the corpse of our founder — and Stations of the Cross along the side, depicting the stages of his destruction.

Each of our lives has a crucifix in the center, also. When we face suffering, we aren’t facing something unusual that should startle us. We are facing the status quo of life on earth, the situation our faith was made to answer.

We were made for the cross. The first step is to accept it. Then start moving forward.