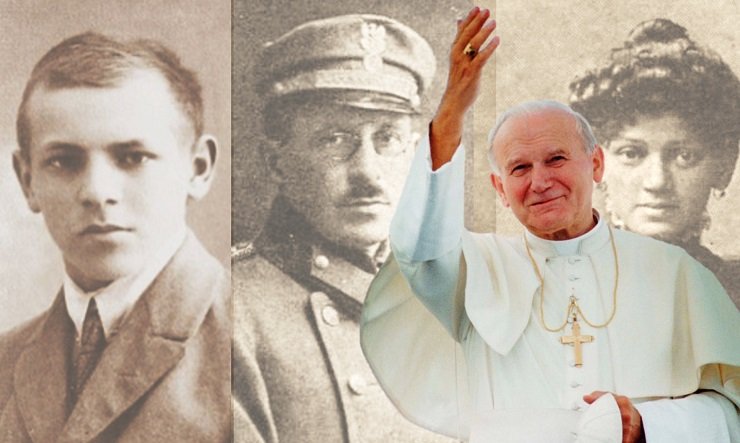 We can never pinpoint the reasons for someone’s greatness. The same circumstances can produce very different results.

But St. John Paul II had an acute awareness of the importance of family life, and it is easy to see why when you meet the family he was born into 100 years ago on May 18, 2020.

It is said that Emilia Wojtyla always dreamed that one of her sons would be a doctor and one would be a priest. Her dream came true — but she didn’t lived to see it.

Emilia was 36 years old when she gave birth to Karol Wojtyla, Jr.

She had given birth twice before: Her daughter Olga died in infancy, her son Edmund was 14, and Emilia was delighted by her new boy.

“The pope’s mother was particularly close to her son Karol,” Emilia’s friend Helena Szczepanska remembered. “She was an absolute darling,” she said, singing to her son and predicting great things for him.

Karol was 9 when his mother died. Ten years later, he wrote a poem to her which, in the best translations, captures both his acute sorrow and surprising hope.

“Over this your white grave
I knelt with my sorrow
o, how long ago it was …”

“Over this your white grave
there radiates a bright silence,
as if something soared up,
as if hope strengthened …”

Though he was 14 years older, Edmund Wojtyla was the big brother every boy wants. He took Karol hiking and skiing — and involved him in his passion for theater and soccer. Not coincidentally, John Paul is remembered for hiking, skiing, acting, and soccer as a boy — all the stuff Edmund liked.

Edmund was a hard-working, good humored doctor at Powszechny Hospital, where he helped organize activities to cheer up the patients and staff. But he only worked there for two years. He cared tirelessly for victims of a scarlet fever epidemic, then died of their disease on December 4, 1932.

John Paul later said that his brother’s death was even more painful than his mother’s.

After his mother and brother died, all that was left was father and son. The senior Wojtyla was a military man of quiet integrity known as “the captain.”

“The violence of the blows that struck him opened up immense spiritual depths in him,” Pope John Paul II said of his father.

He learned discipline from his father’s example — and fun, too. The widower dad and son played soccer in the house. Most of all though, he taught him prayer.

“Even now when I awake at night, I remember seeing my father kneeling and praying,” the pope said. “My father was the person who explained to me the mystery of God.”

John Paul II is more than the product of a particular upbringing, but it is hard not to see how his family shaped him.

Losing his mother could have drowned him in self-pity, but his father’s example taught him a better way.

Losing a brother like that could have made him bitter, but instead it inspired him to imitate his sacrifice, giving his life for others in the Church.

Losing his father at 19 could have been the step too far that led him to reject God. His neighbors would have understood, and we never would have heard of him. He spent the night of his dad’s death praying by the corpse, and visited the grave constantly after that. God alone knows how he helped Karol through. But he did.

John Paul would go on to change the world. Literally.

It is inspiring — and sobering — to think that it all started with three obscure Polish Catholics living their faith and family love without compromise.