It’s a Beautiful Day in … Lent 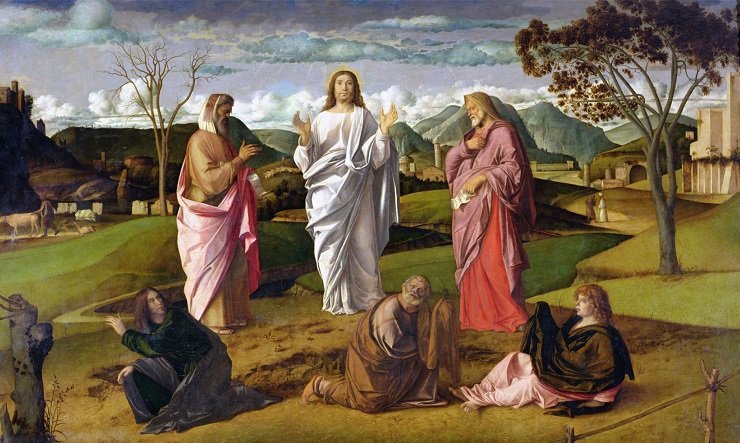 And when the disciples raised their eyes,
they saw no one else but Jesus alone.
Matthew 17:8

Welcome to the Second Week of Lent. A first for me this weekend has been a homily which uses as a reference the movie “It’s A Beautiful Day In The Neighborhood”, tying it to the Transfiguration. That interesting analogy happened this Second Sunday of Lent. The homilist drew out the concept of Jesus as divine, as demonstrated as he spoke with Moses and Elijah in a bright cloud, followed by God’s exhortation “This is my beloved son in whom I am well pleased. Listen to Him”. But, as the apostles fell prostrate, afraid, The Lord touched them, saying “Rise, and be not afraid”.

If you have seen the movie about Fred Rogers starring Tom Hanks, you likely recognized it was not about Mr. Rogers, but about  Lloyd Vogel, the hard-bitten magazine writer, intent on a “tell-all” scandalous account of the beloved children’s TV host. This was not to be. Vogel, full of buried anger and hurt from his broken family past, could not believe the TV image matched the personal image.

But, Mr. Rogers, the man, was as real, and human, and damaged as they come. He, and we, might be either character at some time. We think we know life’s path. We have the plan figured out. Then, someone enters our space, asking us to look at life a different way.  The goal, in the Transfiguration, was for Jesus to demonstrate He was one with the Father, but, when it was quiet, is one of us.

I have chronicled the instances where I have asked, almost begged, God to give me an answer when I have had to face deeply personal questions with no answer I could see. ”What do you want me to do?” has popped in my head, and more than once, out of my mouth. “Why are you entrusting me with this task?”.

The answer might present itself in time, but it always presents itself. God is good. God presents the path. God gives us peace. We go up to our own mountain, we may be sore afraid, but, as we listen with the ear of our heart, as directed by St. Benedict. We know the path.