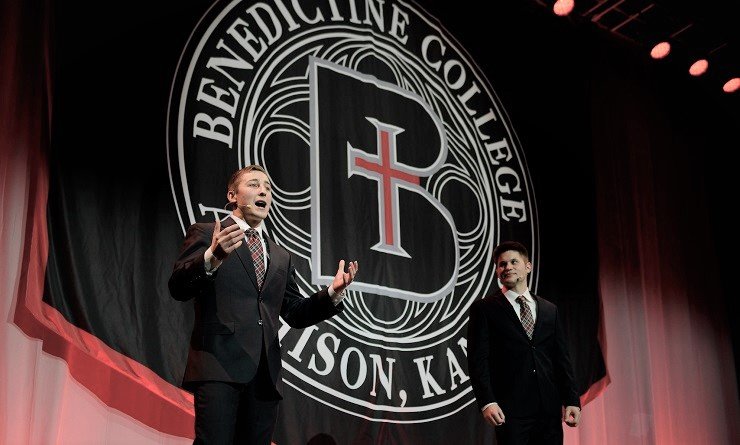 The Gregorian Fellows leadership program at Benedictine College is designed to train and launch Catholic leaders rooted in their faith and ready to be effective in contemporary society. By forming its students deeply in the mission, advancing its mission through alumni in every walk of life, and extending its mission regionally and nationally, Benedictine College hopes to Transform Culture in America. 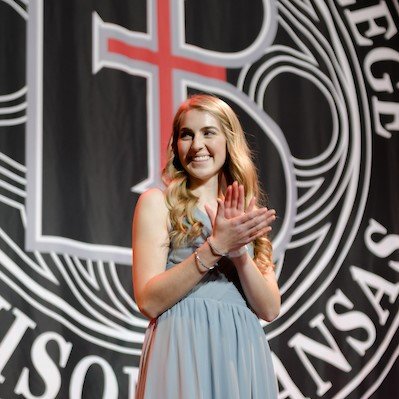 Benedictine College celebrated the success of its plan “Benedictine 2020: A Vision for Greatness” at the college’s 49th annual Scholarship Ball, and announced the college’s follow-up plan, “Transforming Culture in America.”

To illustrate the mission of the college, the event featured four Gregorian Fellows: Nichole Buchman (right), Gabe LeBeau and JP Stedwill (above). Also, Gregorian Fellows Lindsey Hart and Kyle Lauterwasser led the Fund-a-Raven portion of the evening, helping raise more than a million dollars for scholarships to Benedictine College.

Senior biology and pre-med majors Stedwill and LeBeau gave a testimony to what their education and friendships at Benedictine College meant for them. The two best friends created a men’s group on campus, pushed each other academically, and completed a medical mission trip to a small village in Ghana. They will both be going to medical school following graduation in May.

“The college celebrates the success of Benedictine 2020, but now our sights are set even higher on Transforming Culture in America,” said Stedwill. “Transforming culture begins in the friendships formed at Benedictine College founded in our shared faith in Christ and under the protection of his Blessed Mother.”

“Our friendship has helped me realize that true greatness is not about prestige or worldly success. Fulfillment is about using the gifts God has given you towards the service of others,” he said. Their Benedictine College education “empowered us to dream big and pursue lofty goals.”

President Stephen D. Minnis celebrated the success of the “ambitious plan” Benedictine 2020 in his speech. The plan “launched the college’s vision to Build one of the Great Catholic Colleges in America”  and helped Benedictine College become a “national school,” with record-high enrollment and students representing 49 states.

Thanks to its plan, he said “Benedictine College is one of only two schools in the country that are a top 10 US News School and recommended by the Cardinal Newman Society as one of America’s best Catholic Colleges.”

In announcing the college’s new strategic plan, he said: “Transforming Culture in America will be done by forming our students in the college’s mission of community, faith and scholarship like JP and Gabe and other students. The plan will advance the mission by placing our alums in positions of influence in their careers, neighborhoods, and churches. And culture will be transformed by extending our mission beyond our borders with projects we have already developed.” 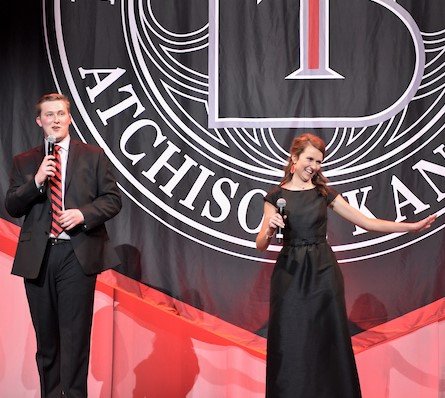 Kyle Lauterwasser and Lindsey Hart encouraged donors from the stage (right). Before the Ball, The Independent magazine named the Scholarship Ball as a Top 10 Philanthropic Event in Kansas City. The successful event was cochaired by Lené Westerman ’85 and Kevin’79 and Colleen (McGraw) ’81 O’Malley. The night was dedicated to Kevin’s father, the late Frank O’Malley, alumnus, former board member, and major donor to the college.

The evening ended with the presentation of the Cross of the Order of St. Benedict, the highest honor of the college, to Kansas City-Kansas Archbishop Joseph Naumann, who leads the U.S. bishops’ pro-life committee.

“In an era when sadly many Catholic colleges have closed and others have lost their Catholic character, Benedictine College stands out for its unabashedly Catholic culture and spiritual life, high academic standards, beautiful campus and a warm and vibrant experience of student life,” said Archbishop Naumann, who also praised the college’s plan to Transform Culture in America.