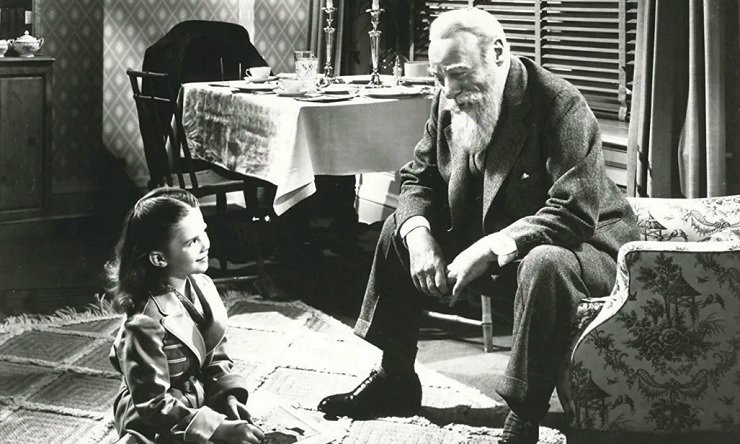 It should come as no surprise that many fans of Myles Connolly’s bestselling novel Mr. Blue are also fans of the classic film Miracle on 34th Street. Both works of art have strong religious elements, a forthright protagonist, dramatic face-offs with the world, and just a bit of feel-good sentimentality.

But there’s a hidden connection between the two, one that is probably on your local library’s shelves, deep down among the archived magazines.

Connolly and Davies in Hollywood

To get there, let’s start with Mr. Blue. Right after he published it in 1928, Myles Connolly left his native Boston for Hollywood. Within a year he was writing screenplays and producing films. By the 1950s — when Connolly began releasing novels again — he had written and/or produced more than thirty films.

That’s a long time for a fervent Catholic to be successful in Hollywood, even in those days. And by all accounts, Connolly was just that: a daily Mass-goer, a keen conversationalist, and a highly skilled debater. People took notice of Connolly and knew exactly what he stood for.

Around this same time, another Hollywood maven was making his name: Valentine Davies. One of the first stories he wrote for the screen turned out to be one of his best: Miracle on 34th Street, for which he won the Academy Award in 1947. Davies would write stories or screenplays for nearly twenty more films or television movies, and he would chair the Screen Writers Guild and the Academy itself. To this day, a Valentine Davies Award is given annually to an outstanding film or media writer; recipients have included Carl Reiner and Ray Bradbury.

With that in mind, let’s turn to 1950. Connolly hadn’t published any novels since Mr. Blue, but he still had literary stories to tell. Early that year his second novel The Bump on Brannigan’s Head came out. A cinematically envisioned book, it reads like that rare novelization of a screenplay that actually works.

Here’s a quick summary. The fiery tempered Tom Brannigan decides in the wake of his son’s atheistic departure from the family home that he will try to live the Gospel. Doing this means loving his enemies — something Brannigan has a very hard time doing. But as he does, God works great graces through him, even effecting miraculous cures. When the local newspaper editor gets a hold of Brannigan, things begin to look utterly transformative for the town — until it all comes crashing down.

Abounding in wit and steeped in spiritual wisdom, Connolly’s The Bump was generally well received in his lifetime. The secular press, in particular, lauded the novel’s humor and its hopeful yet bracing understanding of human nature.

And here is where the hidden connection comes in.

One of the better magazines of this time, especially for its literary content, was The Saturday Review. In late April, it ran a full-column review of Connolly’s The Bump, including a classy portrait of the author. The reviewer appreciated the book’s “fresh, engaging variant on a familiar theme.” He especially liked the first half of the book, with its “dry, unassuming humor” and its “live sense of the satirical.”

Out of objectivity, the reviewer did offer one critique, but he did it in such a complimentary way that the reader would smile along with him: “If, in the ending, Mr. Connolly gets caught up in the pathos of his own story and the denouement seems obvious and heavy-handed, this reviewer failed to notice it. Perhaps he, too, received a bump on the head!” The reviewer sounded like someone who knew how a good tale should be told.

Who was the reviewer of the second book published by the author of Mr. Blue? Valentine Davies — the writer of Miracle on 34th Street.

Of course, this discovery begets many new questions. Did Davies and Connolly know each other? Did they ever meet through their mutual friend Frank Capra, who had asked Davies to write a screenplay of a story he wanted to film, The Flying Yorkshireman? Surely there is more to the story.

In the meantime, we can only imagine that, to borrow from Chesterton, Connolly and Davies and all their characters are enjoying their “great flagons in the tavern at the end of the world.”