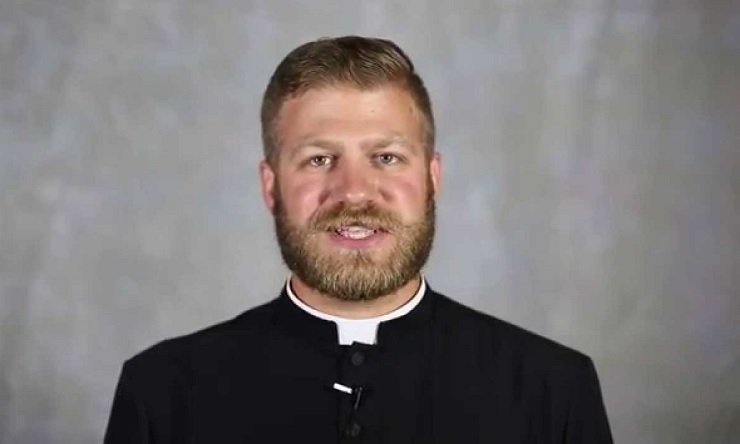 “Ordination to the priesthood feels simultaneously like a culmination and a beginning,” Father Zachary Tucker told the Catholic Voice in the Archdiocese of Omaha. “I do not know everything that is in store for the future, but I am confident that it will be a great adventure.”

After high school in Omaha, Tucker attended Benedictine College in Atchison, Kansas, where he majored in criminology and minored in history.

For two years after college, he served as a missionary with the Fellowship of Catholic University Students (FOCUS), an organization that was founded at Benedictine College. Tucker was a missionary at Arizona State University.

“I count my two years there as some of the happiest times in my life, and a small piece of my heart will always reside there,” he once wrote. “In with these students, in walking alongside them on their individual journeys towards the Lord, I was amazed by their vulnerability as they shared their brokenness with me.”

“I began to discern my call, slowly through my conversation with him,” Father Tucker told the Archdiocese.

He decided to enter the seminary after realizing he had no good reason not to.

He said he went to the chapel and listed all his reasons for not entering the seminary, “and they were all really lame.”

He began attending Kendrick-Glennon Seminary in St Louis. “Throughout my years of seminary, the Lord quietly confirmed my vocation,” Father Tucker said. “There was no lightning bolt-St. Paul moment, just a lot of peace and joy in accepting the call.”

He finished his seminary studies at the Pontifical North American College in Rome.

“Studying in Rome has also given me the great gift of living close to the rich historical sites of our faith, which I love to visit,” he told the Archdiocese.

In seminary in Rome, he said, “I gave tours to pilgrims at the Catacombs of St. Callixtus.” Thus, he became personally familiar with the official cemetery of the Church of Rome from the 200s. Around half a million Christians were buried here, among them many martyrs and 16 popes.

In his spare time he’s a sports fan, avid photographer and voracious reader.

“There are many uncertainties in life but staying close to the Lord has become my rock and refuge,” he said.