Our ‘Highway to Heaven’ 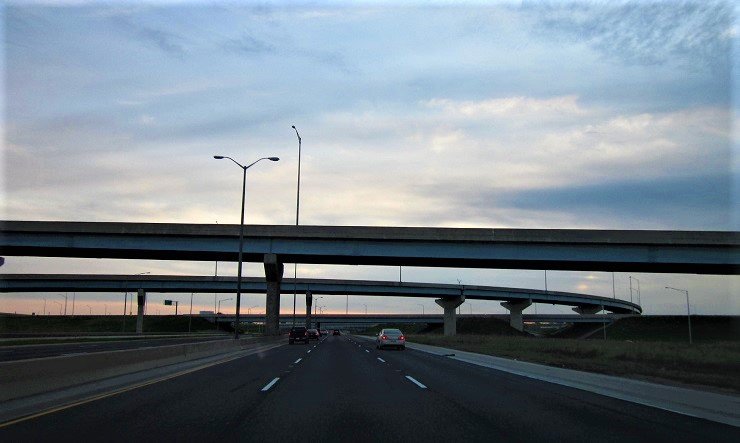 Going down that long lonesome highway
Bound for the mountains and the plains
Long Lonesome Highway, Michael Parks

I was looking for a photograph, actually more than one, which I took in early 1970. The photos are of a section of Interstate 180, otherwise known as “the road to nowhere”. It is a nearly 14 mile stretch of highway originally built to carrying heavy truck traffic from a now long-shuttered steel mill in Hennepin, Ill., to I80, east of Princeton, Ill. It is, probably, the least-used piece of interstate anywhere.

That said, I found beauty in the stark and stillness of the land adjoining the road. At a certain point, you can look south and see a long stretch of valley along the Illinois River. I was working at a radio station in the town of Princeton, knowing that I would be “moving on” sooner than later, which did happen, as I left the station to return to college.

Though I was there only about 18 months, I realized there were places I could go to hear my own versions of the “tiny whispering sound”  that Elijah heard coming from the fire the Lord had set before him. I heard the whisperings, often, as I drove on I-80 in Illinois. I was blessed to have the Lord provide me with lots of “tiny whispering sounds” in listening and acknowledging the inner sadness of someone dealing with sudden grief and loss.

The Lord has whispered when I calmed the anguish of someone trying to gain control to have the “let go and listen” to concentrate on someone special to them, and helping them to see God is in with them, and they can follow His word, a decision that has led to a beautiful marriage.

This may seem rather dramatic, but I believe, more than I might have ever believed, that The Lord has put me on this highway for His purpose. The upcoming stops may be with students in our classrooms, in prayer with our monastic community, and, in His great goodness, allowing me to do His will for our Benedictine community at large.

We begin a new school year in the next couple of weeks. It will be an opening like no other in our recent memory, with the threat of the virus in our midst. We are preparing with solid safeguards, mixed with a community response that, if all participate as they must, we will get through, and end the fall semester safely.

I would tell our incoming students (and our upper-class members, too):

You have your spot on this highway.

This part of your journey begins.

It will have detours, delays, and, yes, plenty of potholes.

But the journey will be filled with new friends, wonderful experiences, and a story that will have your ending to write.

It is a long highway, a lonesome one more often than you expect.

But, when all the world’s issues seem noisiest, “roll up your windows” and listen for that “tiny whispering sound”.

You know what to say:

Good luck to you, and god be with you, every day.