Painting the Redemption: Denis McNamara on the Power of Art 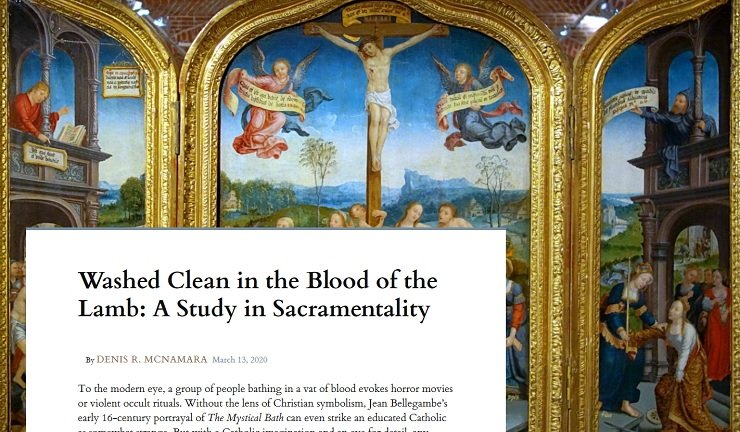 Holy Week teaches some strong truths to Christians about the redeeming sacrifice of Jesus Christ. To communicate strong truths, artists have sometimes resorted to shocking imagery.

Denis McNamara, director of the Center for Art and Culture at Benedictine College in Atchison, Kansas, sums up the mysterious nature of Christian symbolism this way:

“To put it bluntly, ‘Where’s Waldo?’ is much more engaging than ‘Here’s Waldo.’ It invites the viewer to look, to search, to investigate and encounter his own thoughts, experiences and feelings along the way.”

His words are from the article “Washed Clean in the Blood of the Lamb: A Study in Sacramentality,” published in the Adoremus Bulletin, can be found here. An excerpt follows. 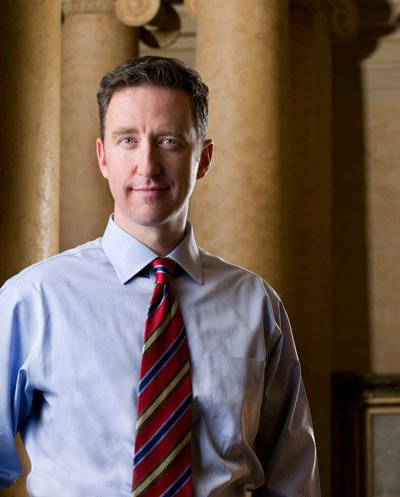 To the modern eye, a group of people bathing in a vat of blood evokes horror movies or violent occult rituals. Without the lens of Christian symbolism, Jean Bellegambe’s early 16-century portrayal of The Mystical Bath can even strike an educated Catholic as somewhat strange. But with a Catholic imagination and an eye for detail, any faithful viewer realizes that Bellegambe’s artistic representation allows access to otherwise unknowable spiritual realities precisely through the poetic representation of Christ, human figures, blood and personifications of the theological virtues. Just as the Incarnation of Christ made God knowable through the matter of his own body, the deep meaning of being washed clean in the Blood of the Lamb is made known by the hand of the artist through wood and paint.

Bellegambe’s work stands out as a particularly striking example of how art can communicate the divine truths of the faith. As the Sacred Paschal Triduum approaches, The Mystical Bath also offers a brilliant image of the liturgy, where men and women are in truth washed clean in the blood of the Lamb and nourished by his sacred body through sacramental signs.

Unlike scientific prose, poetic representation alters realistic facts to make the truth of things more knowable. When Shakespeare wrote, “All the world’s a stage and all the men and women merely players,” he was not speaking literally, but making a higher and more important point about the meaning of life from youth to old age. When a father calls his daughter his “princess,” he does not bestow upon her a royal title, but reveals how much he loves her. In each case something more true is made knowable by speaking poetically.

Similarly, scripture overflows with poetic language. The Book of Revelation says that the Church is the bride of Christ adorned for her husband, equating it with a city called the heavenly Jerusalem, then calling it the “wife of the lamb.” If an artist painted a picture of a city in a white dress walking down an aisle to marry a wooly animal, it would rightly seem absurd. When poetic representation is taken literally, it becomes an opaque thing which speaks only about its own irrationality. But when properly understood, it opens like a flower, intrigues us, and reveals more than it otherwise could.

As Cardinal Avery Dulles notes, “in symbolic communication, the clues draw attention to themselves. We attend to them, and if we surrender to their power they carry us away, enabling us to integrate a wider range of impressions, memories and affections” than simple declarative statements, or what he calls “indicative signs.” …

Bellegambe had to understand and represent the Blood of Christ in a similarly poetic way. Throughout scripture, blood is identified with forgiveness of sins, and Christ is called “the one who loves us and freed us from our sins by his blood” (Revelation 1:5). From the beginning to the end of the Bible, blood is associated with God’s Presence and therefore redemption, justification, cleansing, sanctification, the new covenant, a new birth, peace, membership in the Church and, ultimately, salvation. In the Old Testament, blood represented life itself, and therefore in ancient Jewish worship, the blood of a sacrificed animal had to be poured as an offering to God, the author of that life, and it was never to be consumed by men.

But in a kind of spiritual jiu-jitsu, Christ poured out his own blood, making a perfect offering to God. Then in true generosity, he transformed blood from a thing offered by man to God into something given as a free gift from God to man. Moreover, it was made accessible in a way proper to human beings: sacramentally present in the Eucharist. No longer gruesome or taboo, it became a means of metaphysical cleansing and entry into divine life, all of which is aptly manifested in The Mystical Bath.

Center for Art and Culture