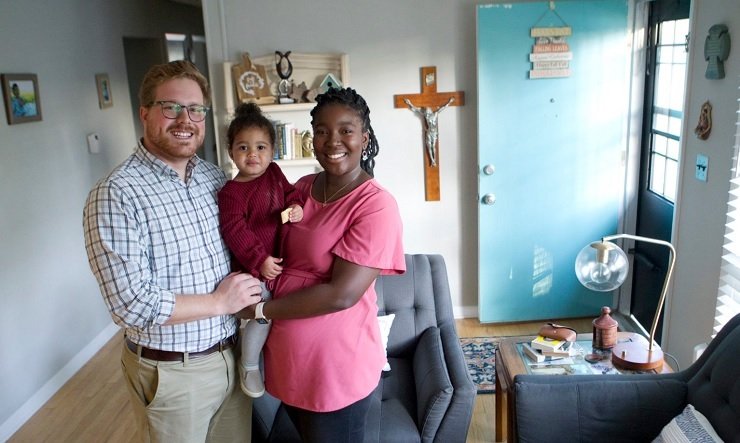 When The Leaven wanted to focus on the issue of race by talking to a mixed-race couple, the two they settled on were graduates of Benedictine College in Atchison, Kansas: Elyssa Bradfield and her husband, Evan.

Elyssa is a middle school religion teacher at St. Ann School in Prairie Village, Kansas. Evan teaches English at St. James Academy in Lenexa. Elyssa was a Gregorian Fellow. The two graduated in 2015.

When the paper asked them what it is like to be a mixed-race couple Elyssa said, “First and foremost, we are a Catholic family.”

She grew up in Omaha, Neb., with her parents, who are from Togo in Western Africa. Evan grew up in Wichita, Kansas. They met and started dating at Benedictine College in Atchison where Evan took a class with sociologist Karen Wood that explored race relations in America.

The class was “mind-blowing,” Evan said. He had an early morning Eucharistic hour at the perpetual adoration chapel on campus. “I remember I was sitting on the steps of St. Benedict’s one night and I was like, ‘Oh my gosh, how do we even move forward in a world so hurt?’”

Elyssa knows about racial bias firsthand. She has heard it “a lot of that in my life, in little things that people would say to reinforce [their bias], not even knowing … that it made me feel like I was less than them. And I think if they knew they were saying those things, they would feel very upset.”

As parents, they hope to witness a better way to their children. As teachers, they also want to make a difference. “I don’t do lessons on racism,” Elyssa is quoted saying. “But when I hear them saying something, I try to take a moment.”

Evan does lead discussions on race as they come up in the literature his class is reading. He said they can be uncomfortable, but also fruitful. “I think the story of racism in America is something really important to teach and talk about,” he told the paper.

“Evan is a really great advocate for people who are different, especially for black people,” Elyssa said. “I always joke that he’s super woke!”

Ultimately, though, they find the answer to racism in their strong faith life. “Whether or not it makes you feel uncomfortable, you have to be willing to say something,” Elyssa told The Leaven. “It’s what we’re called to as Catholics.”

This is the approach Wood teaches at Benedictine College, reported the paper.

Wood is a parishioner at St. Benedict’s Catholic Church in Denton, Kansas, and is the mother of one Benedictine College graduate and two current students. She says the ultimate answer to racism is found in Jesus Christ.

“What a blessing and an opportunity it is for us to have African priests and sisters in our archdiocese,” she said. “While their experiences are significantly different from black Americans, the beauty of their witness and the joy of their vocations has the potential to open the hearts of American Catholics in the pews in a very gentle and tender way.”